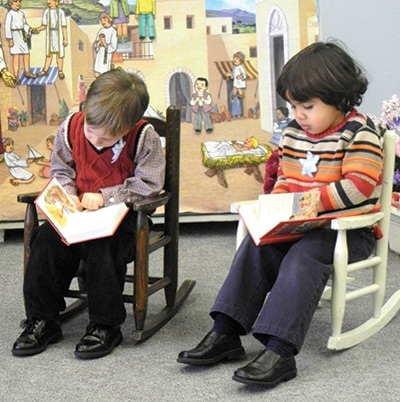 There is a room somewhere in the back of a church or maybe in the basement. Its purpose is similar to other rooms—a place to study, to learn, and to visit.

But this room is a little different. Its walls may be painted a soft muted color with snowflake cutouts taped to them. Perhaps there are colorful pictures of penguins tacked to bulletin boards and tinsel icicles dangling from white ceiling panels. There is usually an upright piano in the corner played by someone who knows all the tunes that will be sung that day. And at the front of the room, next to a blue felt board, stands a woman or man or a duo of both who will have loaded up on an energy-fueling breakfast in order to carry out the task at hand.

There will also be boxes of props—rubber ducks, small hammers, stuffed animals, and felt flowers neatly placed in front of rows of tiny, colorful chairs. But it is the inhabitants of these chairs—of this room­—that make this class so special.

They file in—some shy and others bold—accompanied by moms and dads or sometimes, just dads and other times just moms, and even grandparents. They are dressed in their Sabbath best—tiny suits with coordinating shirts and ties; khakis and button-downs and little sweater-vests; and dresses and tights with pretty clips in their hair. The babies are present as well—nestled in well-cushioned car-seat carriers, they too are dressed in their best.

“Teacher Ruth” or “Teacher David,” or whoever the case may be that Sabbath, welcomes each child with cheerful grins, cuddly stuffed animals, and welcome songs that many of us may still remember from our own days in classes such as these.

These are the children of beginner Sabbath school. Tiny tots from newborns to preschool-ready toddlers who attend a class created especially for them. But at their ages and developmental levels, why does it matter that they come? Are beginner Sabbath school classes Sabbath morning day care or something much, much greater?

Where Did It Come From?

Beginner Sabbath school (ages 0-2) was better known as cradle roll for many years. It is the first class a child is introduced to under the umbrella of the children’s division in most Adventist churches. Other classes for the youngest members of our churches include kindergarten, primary, and junior. The age groups in these classes vary from church to church, but generally the beginner class welcomes its tiniest members from babyhood until they are ready for either a beginner II or kindergarten class environment (ages 3-5).

According to Gary Swanson, associate director for the General Conference’s Sabbath School and Personal Ministries Department, children’s Sabbath school in the Seventh-day Adventist movement had interesting and humble beginnings.

In the late nineteenth century, Protestant churches began Sunday school programs under the name “Sabbath school,” as Sundays were considered the Sabbath. They were initially outreach programs to children who had to work instead of attending school. The idea behind them was to provide academic education while slipping a little religion into the mix.

Among early Adventists, Sabbath school work didn’t come about until 1852, when James White authored 19 lessons for children and youth that were published in the Youth’s Instructor. The first Sabbath school classes for adults were organized in 1853 while James and Ellen White were in Rochester, New York, and in the early days there were only two divisions—children and adults. But the Sabbath school concept was of great importance to Ellen White’s ministry. “The Sabbath school is an important branch of the missionary work,” she wrote. “Not only because it gives young and old a knowledge of God’s Word, but because it awakens in them a love for its sacred truths, and a desire to study them for themselves; above all, it teaches them to regulate their lives by its holy teachings.”1 More formal organization followed in 1869 when Goodloe Bell became editor of the Youth’s Instructor. He created two series of lessons—for children and youth—and published plans for organizing leaders. This more formal approach was implemented in Battle Creek, Michigan. Once it gained initial success, the concept of organized Sabbath school took flight.

The very first children’s division was formed in 1878 and was actually called the “Bird’s Nest.” This soon morphed into the kindergarten division in 1886, and by 1890 children were able to receive Our Little Friend—the weekly paper for the beginner and kindergarten Sabbath school, still in publication today. Over the years the church’s Sabbath school programs have been redefined and reorganized. Though cradle roll was the beloved name of the beginner class, the latter moniker became widely known with the development and implementation of the GraceLink curriculum in 2000. And as the result of a recent reassessment initiative, new material in the form of artwork, resources, program ideas for leaders and parents of special-needs children, etc., have debuted for the junior level this year, with more to follow soon for other age levels.

Do the Wee Ones Really Understand?

The littlest ones in beginner class—some too small to sit upright in their chairs by themselves—absorb everything going on around them like sponges. Developmentally, there are vast differences between a newborn and a 6-month-old, so just imagine what is happening with them cognitively during those crucial first years—a time in which they will learn much more than in other periods of their lives.

Donna Habenicht, Ed.D., professor emeritus of educational and counseling psychology at Andrews University, coauthored Teaching the Faith: An Essential Guide for Building Faith-shaped Kids, with Larry Burton, professor of curriculum and instruction at Andrews University. “Babies, toddlers and 2-year-olds can learn many things in Sabbath school, including religious, social, and character-developing experiences,” which include prayer, singing and moving to music, sharing, listening, giving an offering, saying Jesus’ name and recognizing the Bible as God’s book.2

Though children this young have short attention spans, they are very capable of gleaning much, relying on their senses to learn the most. Thus they benefit immensely from a program filled with prop boxes of goodies such as felts and small toys, felt boards to “wham” pictures of Jesus and shepherds and animals onto, and of course, short and sweet songs. Children of this age group also respond well to repetition—a technique employed by the most experienced beginner Sabbath school leaders. “I like beginners because you stick to the same program as they need that repetition,” says Jane Morrison, a veteran beginner class teacher currently serving at Spencerville Seventh-day Adventist Church in Maryland. “By the time we change programs, they’re kind of just catching on. Parents will say, ‘Oh, it’s nice to have a new program,’ but for a child that age, they need to keep doing it and doing it and doing it.”

And it sticks—in more ways than you may realize. 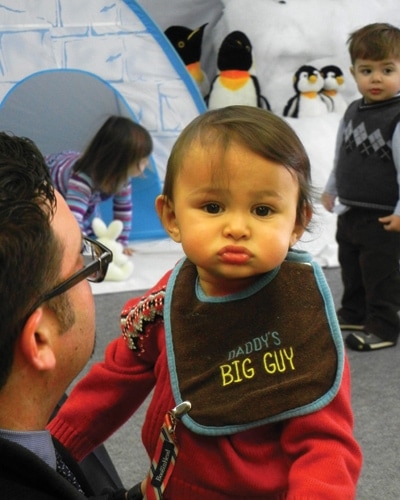 “My mother told me that when I was 14 or 15 months old, she took me to what we then called cradle roll,” says Aileen Andres Sox, editor of Our Little Friend. “It seemed to her as if I were paying attention to everything but the teacher. She remembers thinking that if I weren’t going to learn anything, she might as well go to her own class, taking me along with her. The very next day she noticed I was walking rather oddly and repeating ‘tee toe, tee toe’ over and over. She finally realized that I was trying to sing ‘Tiptoe, tiptoe, little feet.’ When she began to sing the song, I was absolutely gleeful and tiptoed to the music. Never again did Mother think going to my Sabbath school was a waste of time.”

In the life of a church there is a past, present, and future. As adults we straddle the line between the past and the present. But the future of the church lies squarely in the hands of our progeny—our littlest ones.

“There is a saying from Malawi that goes “Nkhuzi nkhu ma thole,” says Saustin Mfune, associate director of the Children’s Ministries Department at the General Conference. “It literally translates to ‘the bulls are in the calves.’ The essence of the saying is that if you want strong reliable bulls, you must take care of the calves.”

It’s hard to ready babies and toddlers in their Sabbath finery for Sabbath school and church and make it there on time. It’s harder still when they can’t sit quietly and you know there is no way the family will make it through an entire service with a restless baby/toddler. But going week after week is crucial.

“Going to Sabbath school with a baby, toddler, or 2-year-old is a supportive experience for baby’s parents,” adds Habenicht. “They meet other people in the church who have babies, and they support each other in baby rearing. They observe how the teacher teaches their child and are encouraged to teach their little ones at home.”

On mother-of-four Chrystal Kueter’s first visit to an Adventist church, she was hesitant to involve herself and her little ones in Sabbath school.

“I thought you had to drop them off at a glorified day care as in other churches,” she says. “So when I was encouraged to stay, I have to be honest, I was really disappointed. But as I watched my son eagerly learning about nature and God, I was stunned! I was moved to tears and blessed more than if I’d gone to a month of Sabbath school classes on my own. I was so moved by the tender way they taught the very young. I was also blessed to be an example for my son, and sit with him to model that example.”

That early exposure to the simplest concepts of our faith in developmentally appropriate ways does make a big difference. “Helping young children grow spiritually nurtures the bud of spirituality that God has placed in the human heart. Eventually the bud becomes the full-bloom rose of spiritual devotion.”3

In a room at the back of the church, a beginner class is ending. A little boy no older than 18 months toddles to a prop box and reaches inside—mimicking his teacher. He finds a little orange felt flag with the word “Jesus” on it. Excited, he waves it around and with a big smile on his sweet face, says: “Ree-zuz!”

In the end, isn’t that what it’s all about? 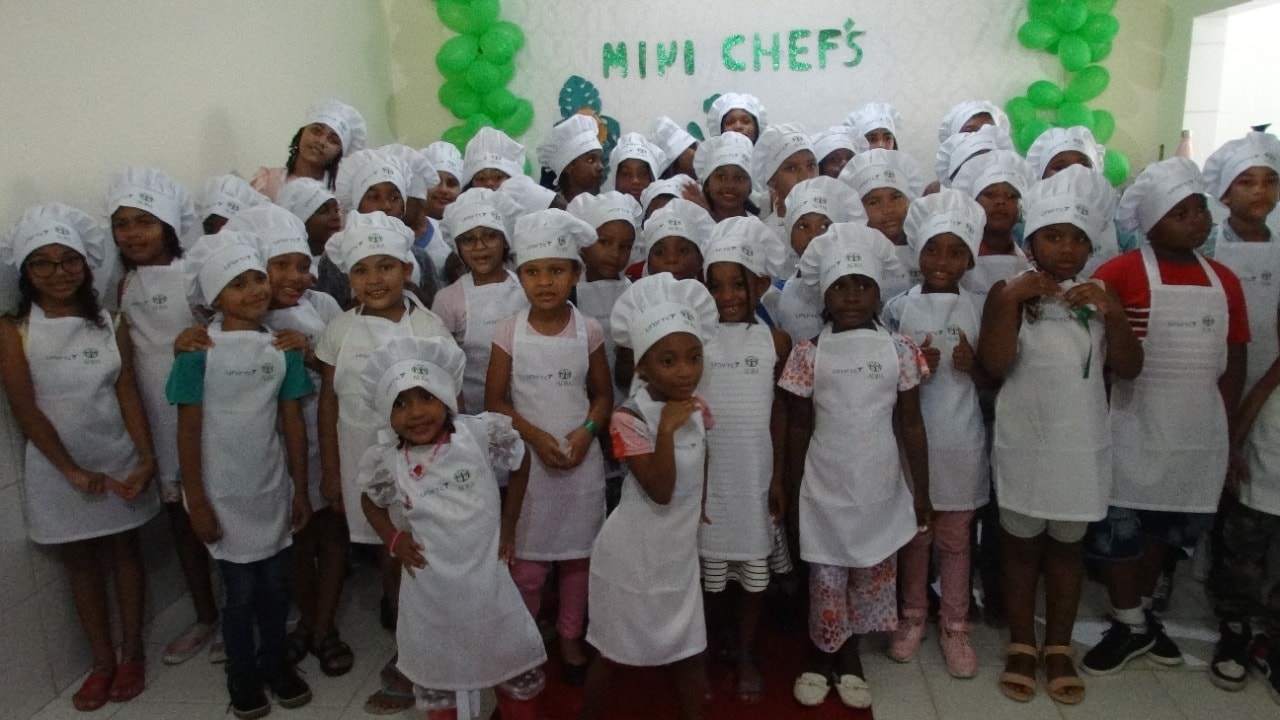