In the U.S., Truck Driver Accepts Christ After Listening to Online Services 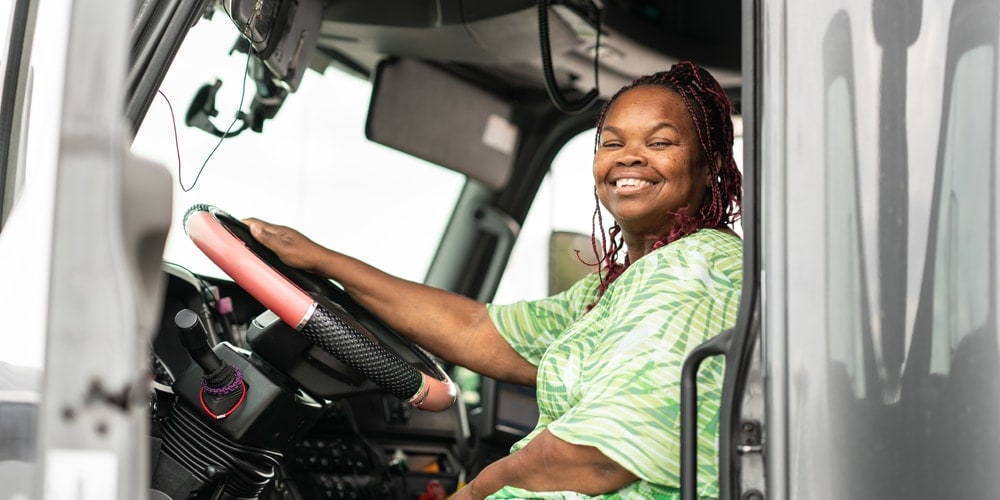 “You know, you’re already living the Adventist lifestyle. You might as well go ahead and make it official.”

These were the words that triggered my sister, Annette Washington, 54, a truck driver from Benton Harbor, Michigan, United States, to begin seeking the Lord. This started a three-year journey that would culminate with her being baptized into the Seventh-day Adventist Church during the pandemic.

Annette and I were raised in another Christian denomination and had been roommates for 29 years until I married and moved to New Albany, Indiana. We also were friends. I challenged her to get out of her semi-truck and do a 5-kilometer race with me in Texas.

Since we would be together over Saturday (Sabbath) hours, I decided to spend the sacred time talking to her about God and her relationship with Him. I then went over our baptismal vows with her and asked her to point out which ones, if any, she didn’t agree with or was not keeping. To her surprise, she agreed with them all but felt she needed time to be completely perfect in her lifestyle.

“Being a Seventh-day Adventist is strict. You don’t do anything halfway. It’s all or nothing,” she said.

“True, but none of us is perfect,” I replied. “It is only by the grace of God that we strive daily to reflect His character fully. I have slip-ups. You’ll have slip-ups. But our Father is patient and loving.”

This conversation took place in August of 2018, and a seed was planted. Over the next couple of years, Annette tried hard but never reached the perfection she so desperately sought.

In March 2020, my church, New Albany Seventh-day Adventist, went on lockdown as the world was hit with the COVID-19 pandemic. Like many churches, we moved our services to Zoom video conferencing.

I invited Annette to participate as she traveled across the United States, delivering goods such as care packages to the West Coast, beans to the South, cereal to the East, and the infamous toilet paper to the North. She drove to towns that welcomed her and thanked her for her service, as her New Albany church family prayed for her safety and traveling mercies.

She became a regular in Sabbath School, divine worship, prayer meeting, and vespers. It became fun for us to ask her, “Where are you?” each time she logged on. She had a few challenges along the way, for which we offered a specific prayer for her.

In August 2020, she contracted COVID-19 and became sick. After we prayed for her, all of her symptoms went away within 48 hours. In December, she hit black ice and slid off the road. Her brand-new truck was totaled. Thankfully, she escaped without a scratch.

A few months before all of this, in June 2020, I had asked Pastor Eric Freking to go over the baptismal vows with her again to see if he thought she was ready. She heard them again but sat silently, fearing she could never mount up to the high call of being a Seventh-day Adventist. She also wanted to get married first to make sure her husband would be an Adventist. “What if you do the opposite and get baptized first?”I replied. “Then the Lord may send your husband your way due to your trust in Him.”

Another issue was that working with her trucking company meant Annette had to be available seven days a week, including Saturday (Sabbath). “I knew I could possibly lose my job — which I loved,” she said. She was concerned she would lose her friends because they wouldn’t adapt to her new lifestyle.

But she decided to test God’s faithfulness. First, she kept the Sabbath and still made on-time deliveries. Next, she told her employer about her desire to keep the Sabbath, and, to her surprise, they said, “OK, you can have Sabbaths off.”

In July 2020, Freking launched a Sunday-night Bible study that covered our Adventist beliefs through the books of Daniel and Revelation. Annette faithfully attended these meetings, even filling out her lessons ahead of time and asking questions. In her testimony, she describes what finally convinced her that it was time.

Her baptism was a high Sabbath for the New Albany church. She told the congregation, “This New Albany church has been a lifeline for me on the road. I try to attend every service. I pay my tithe and offerings online through Adventist Giving, and I feel like I’m a part of the church family.

“John 3:16 is my favorite Bible verse because I know, as a mother, how I feel about my children. So for God the Father to give up His only Son — that must have been very painful, and it amazes me how He made such a sacrifice.”

Annette’s only interaction with the members up to that point had been via Zoom, so she had many surprises meeting them in person, since viewing people online had its limitations.

“I didn’t realize the height of people,” Annette said. “Pastor Freking and [church member] Boyd are much taller than I imagined.”

“It’s Susie!” she said, referring to Susie Fetz, who had walked up to Annette to see if she would recognize her. Although present at almost every online meeting, Susie never showed her face on Zoom; only her name appeared in the black box. When Susie began talking, Annette recognized her by her voice.

“That’s the couch family!” Annette said, referring to Joe and Paula Russell with their kids, James, Sofia, and Jacob. The Russell family attended on Zoom with their three kids sitting on a couch from week to week.

All of the words of encouragement I spoke and the spiritual advice I gave could not lead Annette to God. That was a job only the Holy Spirit could do as He worked on her heart. I give Him all of the credit and the glory. It also is a reminder never to give up praying for our loved ones.

You feel a high joy when you are instrumental in leading a soul to our Lord and Savior, Jesus Christ, but a special type of joy is felt when it is a family member or someone you love.

The original version of this story was posted on the Lake Union Conference news site.