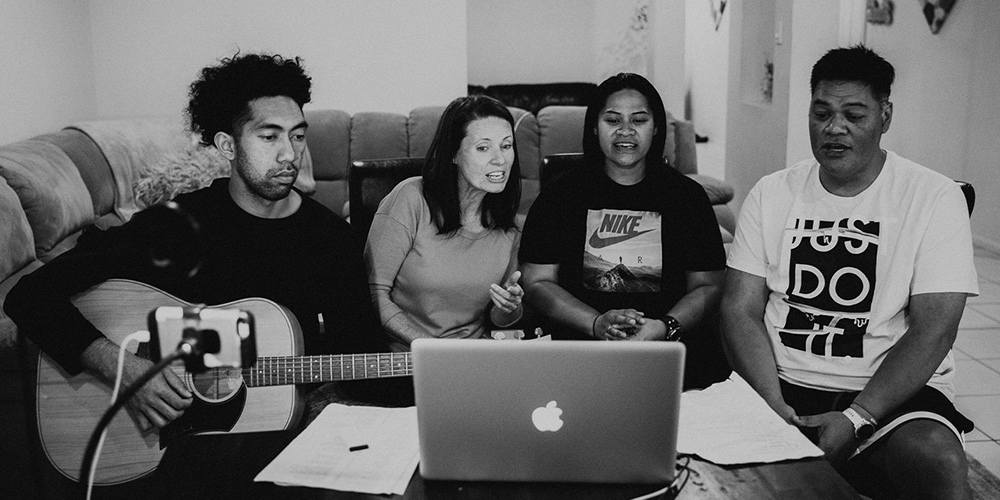 Longing for family and missing music a month after her church closed due to COVID-19 restrictions, Sandra Entermann realized she wasn’t the only one in need of worship and fellowship. “I decided it was time to download the dreaded Facebook app on my phone and hit the ‘LIVE’ button,” she says.

On Friday, April 24, 2020, Sandra and her family blended their voices with a guitar and keyboard to livestream the first Sabbath Singalong on her Facebook profile, performing a set of classic Christian songs requested in the comments section.

Since then, she’s gone live almost every week, with a total of 38 livestreams and 50 different guests at the time this article was written. The number of live viewers hovers between 800 and 1,000 single accounts, while, after the livestream, as Saturday (Sabbath) comes in around the world, the views go up steadily, averaging around 70,000 views a week.

Growing up with morning and evening family worship, where she learned to harmonize, Sandra has had music as a significant part of her life for as long as she can remember. As a child, she started using her musical gifts as a ministry, singing to the elderly in nursing homes on Sabbath afternoons.

Since then, she has sung in all states and territories in Australia, taken her music abroad to 15 countries and recorded six albums — two trios with her siblings and four solos. Having performed for 3ABN, Hope Channel, Breath of Life, Voice of Prophecy, It Is Written Oceania, and The Incredible Journey, Sandra was going to perform for the fourth time at the 2020 General Conference Session until it was canceled due to COVID-19.

“The cancellation didn’t catch God by surprise, and as far as my involvement in singing on a global stage, He had another idea that has worked a treat,” she says, referring to Sabbath Singalong.

“While it is a big commitment, it’s certainly not a chore. I suppose my love of music and people helps. Combine the two, and you have the Sabbath Singalong. I get to sing as well as fellowship with those involved with me and those who are watching online.”

A Phone and a Laptop

Keeping it simple and efficient, Sandra has an easy setup that she can bring to her guests’ homes. “All we use is an iPhone that I sit in a cradle so we can maneuver it around to ensure all participants are in the frame, and then we hit that ‘LIVE’ button on the Facebook app.”

“The built-in mic and camera on the phone are just perfect. I also keep a laptop handy to pull up lyrics for the songs that people request,” she explains, adding that the laptop helps her keep up with the comments, prayer, and song requests.

During and after each livestream, Sandra receives thousands of comments and messages. “It’s quite humbling to know how something so simple is so helpful and healing to so many. People tell us from other parts of the world that they set their alarm clocks for crazy early hours of the morning to not miss the Singalong.”

The initiative has a big Adventist audience, but it has also become a powerful way to reach people worldwide. “I’m aware of 155 countries that viewers have told us they are from, and the exciting part is that 31 of those fall within the 10/40 Window. This is a general area that is purported to have the highest levels of socioeconomic challenges and least access to the Christian message and Christian resources on the planet,” she says.

With regular viewers, Sabbath Singalong has also become a collective-effort outreach initiative. “I’m just so delighted to see what a caring bunch of people tune in each week. They’re quick to respond to anyone who appears that they need some love and encouragement in their journey.”