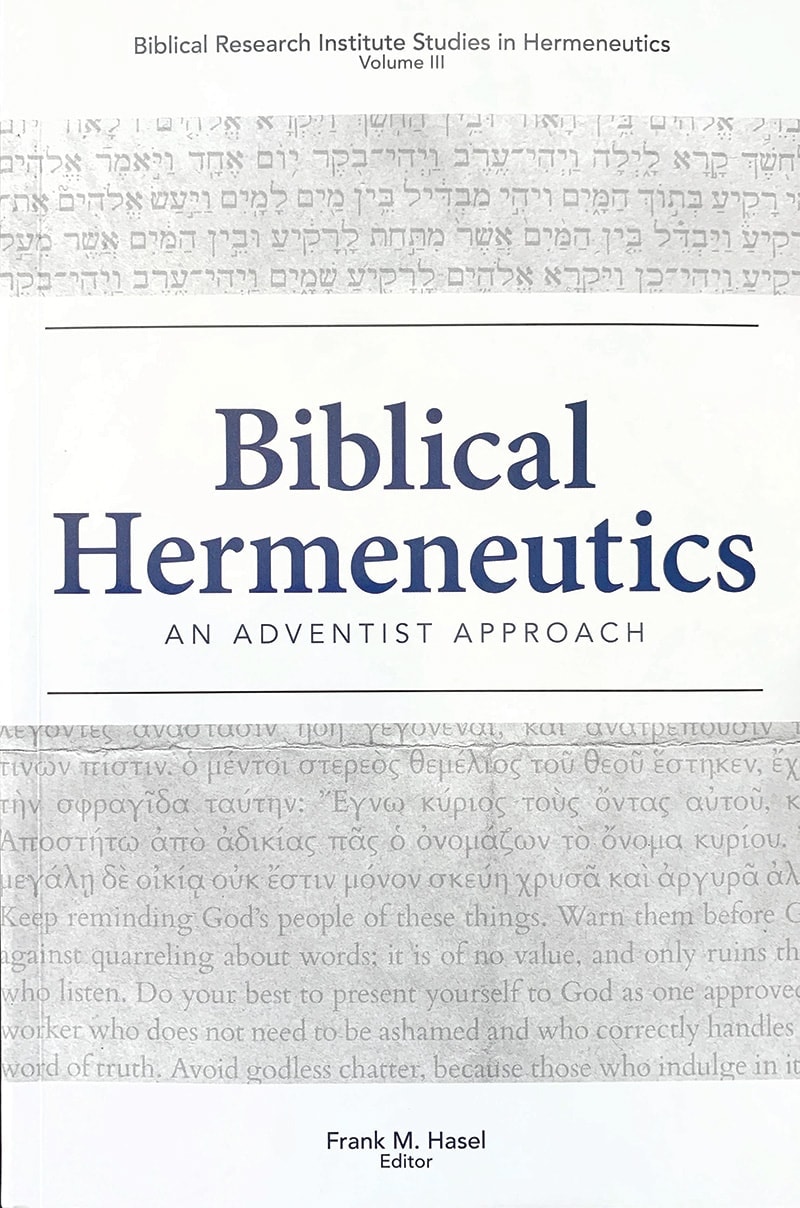 For most of our history, Seventh-day Adventists have been known to be “people of the Book”—a faith community with the utmost regard for the Bible. Current research suggests that 48 percent of surveyed members read the Bible daily or more than once a week. Yet, reading the Bible is not always equivalent to understanding the Bible.* Understanding the Bible requires grasping the basic principles of biblical interpretation that grow out of Scripture’s own claim to be “God’s Word.” This is where Biblical Hermeneutics: An Adventist Approach comes in, which updates and in some instances refines an earlier volume, entitled Understanding Scripture: An Adventist Approach, published in 2006 by the Biblical Research Institute (BRI).

The volume contains 14 chapters, excluding an introduction by the editor and an appendix containing a statement regarding methods of biblical interpretation, voted by the Executive Committee of the General Conference during an Annual council held in Rio de Janeiro, Brazil, on October 12, 1986. As is customary in academic publications, the volume includes a useful index of biblical and nonbiblical books (pp. 475-488).

The list of contributors includes current and former members of the Biblical Research Institute [BRI], as well as other Adventist scholars from educational institutions. Kwabena Donkor tackles the important issue of presuppositions in hermeneutics, reminding the reader that every reader will bring to the Bible a set of presuppositions that are part and parcel of a worldview. “Since interpretation without presuppositions is an impossibility, it becomes extremely important not only to reflect on the nature of an interpreter’s presuppositions but also to understand the manner in which they affect interpretation” (p. 29). The second chapter, contributed by the editor of the volume, Frank Hasel, focuses on elements of biblical hermeneutics that are in harmony with Scripture’s self-claims. Together with Donkor’s chapter, this chapter focuses on methodology and Scriptures’ own claims of inspiration. Hasel suggests to the reader that “Scripture is self-authenticated” (p. 60), which means that its claims are based, not on logic or argument (even though logic and argument are present in the biblical text), but rather on God’s self-revelation that is received in faith.

The following two chapters offer discussions of textual variants and versions (authored by Clinton Wahlen) and the historicity of the Bible as it relates to questions of biblical interpretation (contributed by Michael Hasel). Both of them are important reading, while at times technical, and both reflect the particular research interests and specialties of the two authors.

The next chapter deals with the question of the relationship between culture and our biblical interpretation and offers a unique collaboration between a missiologist (Wagner Kuhn) and a biblical scholar (Clinton Wahlen). The authors discuss a number of cultural elements, including the Sabbath and marriage, circumcision, ritual washings and baptism, slavery, and many more. They query in each case if the meaning of the element was universal, unbiblical, limited, or symbiotic. This chapter promises plenty of food for thought for potluck tables (if and when that will be possible again).

Chapter 6, authored by now retired Loma Linda University biology and paleontology professor Leonard Brand, introduces the reader to the hermeneutical questions associated with the triangle of faith, science, and Scripture. Brand’s nuanced discussion is helpful and highlights the importance of a biblical worldview versus a naturalistic worldview.

The final four chapters offer additional perspectives on an Adventist hermeneutics that are relevant. The Genesis creation record is taken up by Michael Hasel as a test case for the application of the principles of interpretation established in the earlier chapters. Then follows a survey of the historical development of Adventist hermeneutical presuppositions, perceptions, and methods between 1845 and 1910 (Denis Kaiser).

John Peckham offers a helpful look at the prophetic gift (including the ministry of Ellen White) and the sola scriptura principle. He notes that Adventists have affirmed that Scripture is to be the only rule of faith and practice, that it is sufficient and should be interpreted comparing scripture with scripture, that the biblical canon is to be distinguished from noncanonical prophetic messages, and that, as insisted by Ellen White herself, her writings are not the source of doctrine and should not be employed as a final and normative interpreter of Scripture (p. 403).

The final chapter, “Recent Trends in Methods of Biblical Interpretation,” authored by Frank Hasel, offers an overview of more recent methods that current scholars employ as they engage the biblical text. Beyond the presuppositions of the historical-critical method, the reader is introduced to modifications of the method, canonical criticism, literary approaches, varied postmodern reader-response approaches, and others. Seminary students and professors will value the thorough analysis of this chapter and the rich footnotes that offer starting points for understanding these methods.

Biblical Hermeneutics offers a solid introduction to a Seventh-day Adventist hermeneutics and will become prescribed reading for a new generation of pastors and interested members who are not afraid of footnotes and, at times, complex and foreign terminology. Readers should be reminded that these chapters are not solely the result of individual scholarship (even though that is on display as well). Every chapter has been read and critiqued twice by members of the Biblical Research Institute Committee, listed in the early pages of the volume. Biblical Hermeneutics is thus an effort of doing theology in community—an excellent place to begin all talking about God and His Word.

Closer Look
Islamic Culture And Society
Islamic Culture and Society is a veritable gold mine of useful information for the study of Islam and its culture.
Closer Look
A Biblical View of Sexuality
Readers will learn much from a perusal of the volume, perhaps feeling at times they are learning a little too much.