A positive, life-affirming commentary about Christianity & addressing issues raised by some of Christianity’s harshest critics. In Real Religion in the Real World author Charles Mills makes the case that viewed from a certain perspective, Christianity is the answer to most of the perverse problems that face us as individuals and as a society. The book is the latest offering from an individual who is an accomplished author, photographer, and videographer. His audiences range from young children to the rest of us, and his material is always top-shelf.

The book is in fact an anthology of articles that have appeared mostly in Signs of the Times over the past decade or so (with a couple having appeared in Adventist Review in the 1980s). The articles have been organized into four parts that cover most of the Adventist Church’s 28 Fundamental Beliefs. And since most of them appeared in Signs, the church’s premier outreach publication, they are all written in such a way as to engage those who are searching for answers to spiritual questions.

The author uses personal experiences and anecdotes taken from well-known popular sources and skillfully combines them with Bible verses and stories to connect his readers with practical spiritual truths.

Real Religion doesn’t shy away from tough topics, such as the character of God, hatred, death, judgment. At the same time, it affirms our beliefs about God’s law, God’s Word, the sanctity of the family, salvation, and eternal life. The final and fourth section of the book—“Body Temple”—highlights the relationship between physical and spiritual health, and includes chapters about diet, stress, and breaking bad habits.

The most powerful argument about the vitality of Christianity comes in the last chapter of the book, the epilogue. Mills illustrates that at its best Christianity is not just a collection of doctrines or teachings that are divorced from real life. Christianity in fact improves the quality of the lives of those who practice it.

Real Religion in the Real World is a positive, life-affirming commentary about Christianity. In a society in which religion in general and Christianity in particular is often used as a punch line, or as an example of bigotry or dysfunction, Mills reminds readers that Christianity is a viable solution to many of society’s ills. Real Religion is as much for sharing as it is for one’s own edification and inspiration. 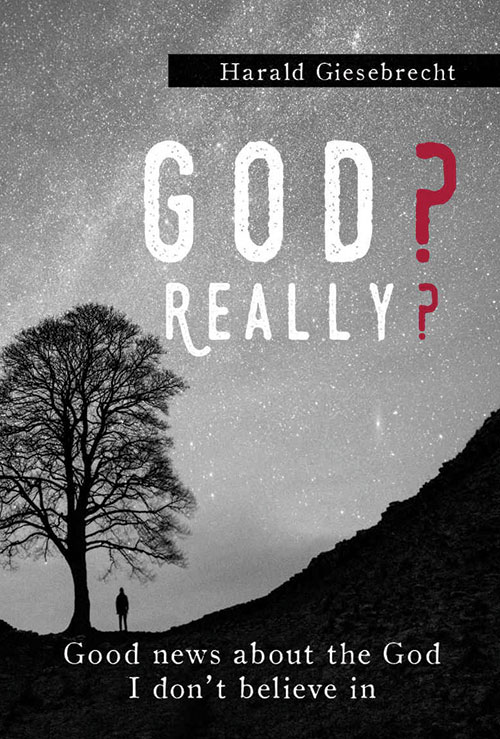 Not many books begin with a statement from the author such as this: “If you are a confident and happy Christian today, content with your faith and the answers you’ve found, maybe you should lay this book aside. It wasn’t written for you.”

He goes on: “It was written for people who are searching, people who would like to believe in Jesus, but who more than once have shaken their fist at heaven and shouted, ‘God? Really?’—or something along those lines.”

In God? Really? The author, a pastor and director of children’s and family ministries for the Seventh-day Adventist Church in Norway, reveals his passion for reaching those who are tempted to give up on Christianity. He confidently and unapologetically addresses issues raised by some of Christianity’s harshest critics, avowed atheists such as Richard Dawkins and Christopher Hitchens.

Giesebrecht’s response is not to dismiss them or their criticism, but to examine them objectively. In the process the author admits that taken casually, some critics are justified in their dismissal of Christianity’s core beliefs.

For example, what does one do with God’s apparent ultimatum: “Love Me or I’ll kill you”? How does one take seriously God’s claim of being a God of love when that “threat” hangs over one’s head?

The titles of the four sections of the book indicate that this is not your typical book of Christian apologetics. They read like dares: “Can God Be Trusted?” “Escape From a Psychopathic God,” “Is God Qualified for the Job?” “Going Deeper.”

In a climate in which many commentators, both secular and religious, decry our age as “post-Christian,”
God? Really? is a serious and readable attempt to look at Christian dogma in a way that both reaffirms biblical faith and challenges Christians to see the claims of the gospel—and more particularly God’s true character—as the beginning of making Christianity relevant in a society that sees itself as post-Christian.

God? Really? doesn’t minimize the teachings of the Bible. It admits straight up that some things in the Bible are difficult to understand. But then the author goes on to examine several (not all) of these problem texts to reconcile them with other passages that help readers examine them from fresh perspectives.

One of the great perils of reading the Bible is not misunderstanding it, but reading it in a way that portrays God as someone created in our own image. Jesus’ life and ministry was an attempt to set the record straight.
God? Really? is one man’s struggle to harmonize Bible stories that seem to extol violence and bloodshed with the being we love and worship as the Prince of Peace.