Bryant Says Jesus' Style of Servant Leadership Should Be Our Guide 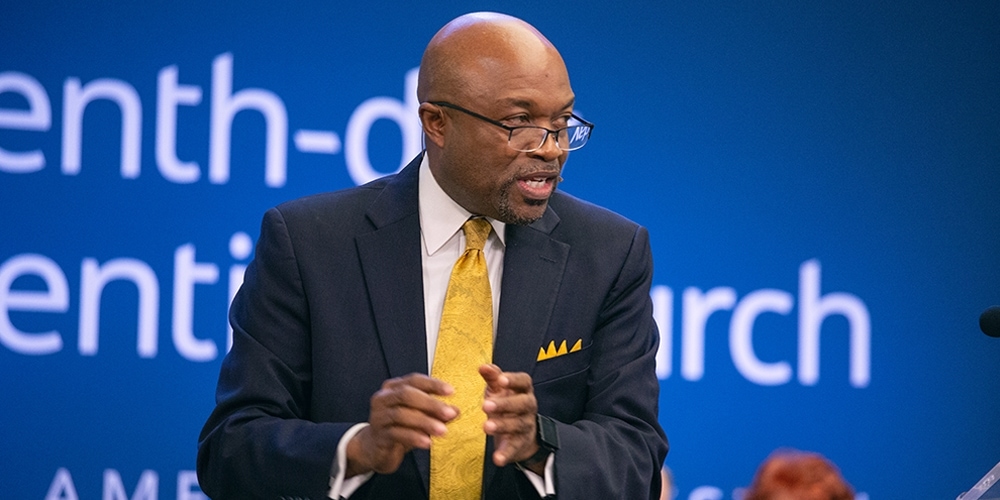 By Julio C. Muñoz, with reporting by Mylon Medley and Kimberly Luste Maran

During the Sabbath (Saturday) worship service for the 2018 North American Division (NAD) Year-End Meetings (YEM), G. Alexander Bryant, division executive secretary, said, “We cannot work with Jesus without having the mind of Jesus.”

Bryant, preaching a sermon entitled “Having the Mind of Christ,” challenged the delegates, families, and guests attending the 2018 NAD YEM Sabbath program to always take advantage of opportunities to demonstrate Jesus’ leadership style of humility and sacrifice.

Before Bryant began, Daniel R. Jackson, president of the NAD, introduced him.

“Alex is not ‘on again, off again.’ He is not ‘I’m happy today, sad tomorrow.’ ‘I love the church today, I’m not so sure now.’ He’s a lifer,” Jackson said regarding Bryant’s love for the Adventist Church.

As Bryant began, he said, “Our church is going through difficult times. I thought about what to preach.” After a pause, he added, “All I have is Jesus.”

The sermon expanded on the theme of this year’s YEM, “Working Together with Jesus.” Bryant reminded the audience that Christ’s model of servant leadership is as countercultural and revolutionary as His teachings on Christian living.

“Jesus revolutionized everything He touched,” Bryant said. He explained that it was a part of the culture of Jesus’ day to repay an eye for an eye and a tooth for a tooth. “The Gentiles had a culture of kill or be killed, survival of the fittest, only the strong survive,” Bryant continued, “yet Jesus taught us to love our enemies and to turn the other cheek.”

Bryant went on to relate the story of Jesus and the disciples traveling from Galilee to Capernaum, found in the Gospel of Mark. While they were together, Jesus told them about His imminent death at the hands of His enemies. Afterwards, His disciples began discussing who amongst them was the greatest. Jesus responded by saying, "If anyone wants to be first, he must be last and servant of all” (Mark 9:35, CSB), a powerful lesson for the disciples in humility and sacrifice as Jesus described His style of leadership.

Bryant advised that Adventist Church leaders should follow the will of God, not their own will. “God is calling us to divest ourselves, as Jesus did, of arrogance, of pride, of thinking ‘my way is the best way and the only way’ — you’re being set up! Because that’s the devil’s way. That’s his kingdom. Jesus says, ‘So shall it not be among you’” (Mark 10:34, paraphrased).

“Arm twisting does not belong in the church of God,” Bryant added. “We must be careful of holding up protocol and processes as sacrosanct.”

“In leading like Jesus, I would rather lose playing fair than win playing foul,” Bryant declared when talking about Christ-like leadership. He reminded those gathered that leading with Christ’s method does not always mean winning.

“God looks for us to use the power of our position to stand up for those who cannot stand up for themselves,” said Bryant. “This sounds like social justice to me!”

Bryant ended with encouragement for the Seventh-day Adventist Church in North America. “Jesus is still in control of this church,” he said. “We may not see how He’s steering it, and where He’s steering, and where it’s going to go; but that doesn’t matter.”

“I don’t know about you,” Bryant concluded, “but I know how this is going to end. Be faithful, and God will take us through.”