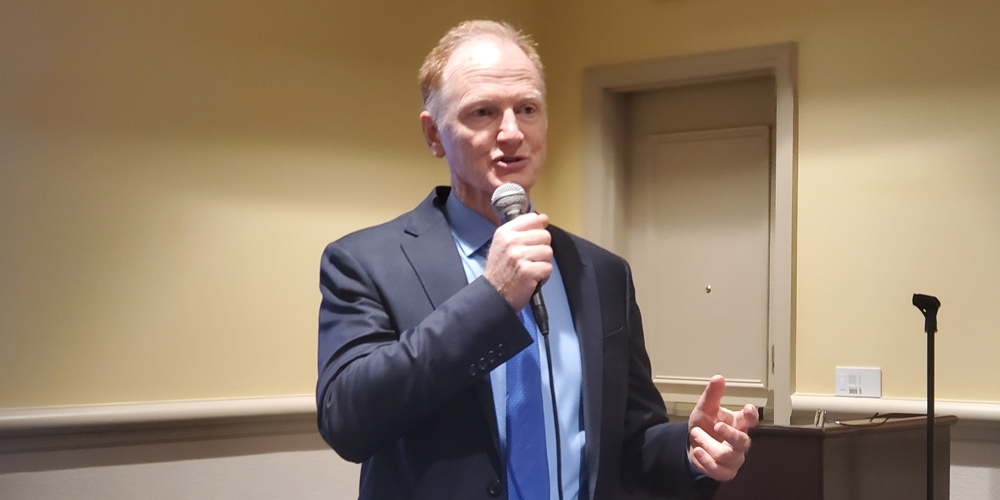 A seminar by It Is Written (IIW) speaker/director John Bradshaw at the Adventist-laymen’s Services and Industries (ASi) 2021 International Convention in Orlando, Florida, United States, discussed how to spot conspiracy theories and what to do about them, especially in the context of church life.

The August 6 presentation sought to provide Bradshaw’s audience with tools to identify a conspiracy theory, which is defined as an explanation for an event or situation that invokes the action of sinister or powerful groups. He also sought to share some tools to help members make sure that conspiracy theories do not affect life as part of a family of faith.

“When I hear a conspiracy theory of the many going around, I am usually driven to ask myself, ‘Is this true?’ ” Bradshaw said. “In most cases, the plain answer is, ‘I don’t know, and neither do you! In fact, it is often very hard to verify.’”

A Window into Conspiracists

Conspiracy theories, however, often shed light on those who promote them, Bradshaw explained. “No rational thought stands in the way of a conspiracist,” he reminded his audience. A conspiracist, Bradshaw explained, usually is eager to describe not only what has happened but purports to reveal hidden knowledge that nobody else has. “Only the conspiracists have the Holy Grail of incontrovertible truth, the undeniable evidence that had not yet been produced. A conspiracist says they have access to knowledge that no expert has, and he or she is the only one privy to the secret information,” Bradshaw said.

He explained that conspiracists end up casting doubt on almost anything. And they are extremely competent in their arguments. “But it’s usually only innuendo,” he said, “as they just present things that the rest of us cannot disprove.”

A Shred of Truth?

Bradshaw conceded that not all conspiracy theories are simply theories. “Not all are baseless,” he said. Some ideas that first start as a conspiracy theory could be based on some facts. “Sometimes, governments make mistakes, hiding some information from people, giving people reason to believe conspiracies.”

For example, Bradshaw said, many issues related to the COVID-19 pandemic were not handled openly. “Then people might say, ‘It’s not real.’ But it is real!” he emphasized. “Just attend some of the funerals of people who got infected and died, and you’ll see how real it is!”

Conspiracists and the Life of Faith

Bradshaw emphasized, however, that the focus of his presentation was not so much to describe conspiracy theorists or their theories but to inform members on how those theories can affect our life as part of a community of faith. “How can we avoid conspiracy theories?” he asked. “After all, it is something that affects the church!”

He also asked what should be the response to conspiracy theories. “If you think, as some conspiracists say, that [American basketball player] LeBron James is a devil, what should you do?” Bradshaw asked. “Instead of spending time spreading that message, you should start praying for him!” he said.

In a church context, Bradshaw said, members who waste their lives spreading conspiracies should choose to make better use of their time. “Please just stop,” he said, addressing a hypothetical conspiracist. “Stop, because you are doing the work of the devil.”

Against that background, Bradshaw advised church members to be very careful when witnessing to others. “Please be careful how you share your beliefs, or you may make your church look silly,” he said, adding that as Christians, we should make sure we know where our attention should be. “Our message is about the gospel of Jesus, not about conspiracies,” he emphasized.

Bradshaw reminded church members that we are commanded not to bear false witness, so we should be cautious about what we share online or otherwise. “If you don’t know, you don’t have business sharing it,” he said. “And don’t post it online!”

It is another reason, he emphasized, why we should stop giving ear to people who destroy others. “Please don’t watch and don’t share [those theories]. We don’t need them. We haven’t been called to demonstrate that high and mighty businesspeople want to bring the end of the world,” Bradshaw illustrated. “It is not our message!”

The Flat Earth Movement and Salvation

In the latter part of his presentation, Bradshaw shared how someone contacted him once to tell him that he was glad It Is Written (the ministry Bradshaw leads) had said that the earth was flat. “But I never said that!” Bradshaw told him, to no avail.

Bradshaw tried to reason with the man. “Everything suggests the earth is spheroid. Every government, every educational institution, every scientist should be lying,” Bradshaw told him. “Why are they lying? What do they gain?” But nothing he said could talk that person out of his belief.

Finally, Bradshaw told him, “I believe you are going to leave the church.” And he added, “Please note that the church you are a part of does not agree with you. Before long, you will conclude that the church is lying and that I, as a pastor, am lying too. That every pastor is lying. It doesn’t make a difference because if you believe in one conspiracy theory, you believe them all,” Bradshaw said. “People just don’t stop with one.”

In that sense, Bradshaw said, believing that the earth is flat will cost some people their salvation. They will end up distrusting God’s church and its members. They will just stop believing.

Bradshaw explained that the church equivalent of conspiracists are people eager to reinterpret biblical prophecy. He reminded his audience that Seventh-day Adventists base their reflections primarily on fulfilled prophecy. “What about the future?” Bradshaw asked. “We see an outline, not a full picture,” he said. “Some like filling the gaps with claims that cannot be justified or proved.”

He called church members to stop seeing a hidden plot behind every event in the world. “Even if you believe it, please don’t repeat it,” Bradshaw advised. “If you are dedicated to criticism, you must stop. You must stop in order to save your soul, because you are doing the devil’s work, not God’s work,” he said.

Bradshaw reminded Adventist members that we don’t have to like the church, but we are commanded to love the church. “If you are engaged in criticism, you must stop. Leaders are human; they make mistakes. Our job is to pray for the leaders of the church,” he said. “We have a mission here on earth, and it's not to straighten out the church. Speak up, but do it nicely! Because God is at the helm of the church.”

Bradshaw explained that despite all he had said, there is, in fact, one real conspiracy in the world. “It is what we call ‘the great controversy,’ the great plot by Satan, full of subterfuge and lies.”

It is the reason, Bradshaw said, that the issue is not to determine whether someone wants to control us. “The devil is trying to control us,” he said. “The devil is at work, so you and I must redouble our efforts to reflect the chara
cter of Jesus. We’ve been called to lift Him up!”

Against that backdrop, we must decide where we will place all our energies. “We can have opinions and defend issues, but we must demonstrate to the world that our focus is Jesus,” he said. “If you are wasting your energy on conspiracy theories, in what you perceive to be evils in the church, you are robbing God of energy He wants to use to reach others,” Bradshaw explained. “Let’s continue to study and read, but let’s not fight about it. Let’s not get distracted. He told us, ‘Occupy till I come.’ ”