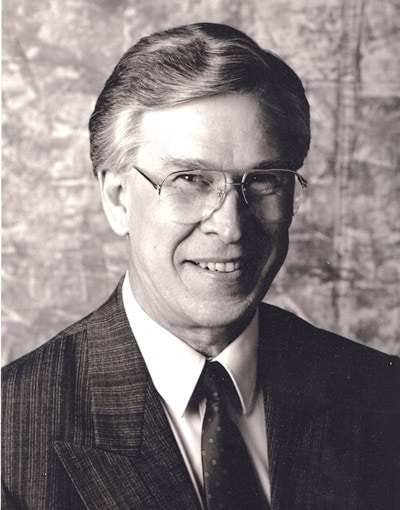 Wednesday, November 19, 2014, Adventist and Evangelical scholars from around the world gathered at the Town and Country Resort and Convention Center in San Diego, California, to commemorate the life of theological scholar Gerhard Franz Hasel, who was cut down in his prime two decades ago this year. Man of faith, beloved father, able administrator, distinguished biblical authority, and mentor to many, Hasel lost his life in an auto accident while serving

Michael Hasel, Southern Adventist University’s Professor of Near Eastern Studies and Archaeology, Director of its Institute of Archaeology, and Curator of its Lynn H. Wood Archaeological Museum shared reflections from a son’s privileged perspective. He told how as a teenager Hasel was adjudged the best electrical engineer apprentice in his city of Frankfurt and his state of Hessen. But an inner summons to do something unique for God led him to turn down a University scholarship that would have fully funded him all the way through doctoral studies. Instead, he registered as a student at the Seventh-day Adventist Marienhohe Seminary in Darmstadt and sold Christian books to finance his schooling. Completing Marienhohe’s theological course of study in 1958, he moved to the United States and the next year, 1959, earned a B.A. in Theology from Atlantic Union College.

Multiple graduate degrees followed, financed by more Christian book sales, for Hasel was a firm believer in the virtue of Christian book selling as a preparation for gospel ministry. From Andrews University he earned M.A. and B.D. degrees in Systematic Theology and New Testament respectively; from Vanderbilt University, a Ph.D. in Biblical Studies. His breadth of mind and scope of study were preparing him to become one of the world’s leading Old Testament theologians. His book Old Testament Theology: Basic Issues in the Current Debate came to be viewed by many as the definitive evaluation on Old Testament theology for a generation of OT scholarship, used at one time by as many as ninety different seminaries and thousands of students. Some of the world’s foremost biblical scholars published reviews of it, including Millar Burrows, John L. McKenzie, and James Barr. Eerdmans published four editions of the work, as Hasel grew it from a slim volume of less than 100 pages (minus the indexes), with a two-page bibliography in 1972, to 208 pages of text and a forty-two page bibliography in 1991. Because of its success, and because Gerhard had pursued both Old and New Testament studies at Vanderbilt University, Mr. Eerdmans, the publisher, journeyed to Hasel’s office and asked him to write a companion volume, New Testament Theology: Basic Issues in the Current Debate. This work appeared in 1978, three years after publication of the second revised edition of Old Testament Theology. Walter Kaiser, Colman M. Mockler distinguished Professor of Old Testament and former President of Gordon-Conwell Theological Seminary in South Hamilton, Massachusetts, spoke of his personal friendship and professional collegiality with Hasel. He recalled how they invited each other to debate theological positions before their students in each other’s classrooms.Richard Davidson, current John Nevins Andrews Professor of Old Testament Interpretation, succeeded Hasel in that chair at the Seventh-day Adventist Theological Seminary. He recalled the thrill of those debates he heard as a student in Hasel’s class. He also recalled delivering the homily at Hasel’s funeral, which he spoke of as “one of the most difficult sermons I have every preached.” Notwithstanding, Davidson noted that many of Hasel’s students determined at his funeral that they would not let the death of their mentor and DoktorVater be in vain, that they would carry forward the theological dream for which he gave his life. The assembly was also addressed by Eugene Merrill, a distinguished retired professor of Old Testament studies at Dallas Theological Seminary and, like Kaiser, a former president of the Evangelical Theological Society. In his remarks he made much of the fact that he was born in the year between Kaiser and Hasel. To the amusement of his audience he claimed that he often functioned as either the buffer between them that protected them from each other, or as a point of balance that represented the more reasonable point between their theological positions.

Davidson’s address affirmed that Hasel “showed the way in writing the theology of a biblical book.” His commentary on the book of Jonah includes a theology of Jonah. The commentary examples Hasel’s “summary interpretation” of a biblical book. Davidson stated that Hasel “engages in the full sweep of what he sees involved in (exegetical-) theological analysis, including arguments for the historicity of the book, an examination of the literary structure (a block parallelism) of the book, a synthesis of the book’s major themes, and its intertextual relationship with the NT.”

At the time of his death Hasel was serving as associate editor of Andrews University Seminary Studies; editorial consultant for the creation science journal Origins; a member of the editorial board of the Journal of the Adventist Theological Society; consulting editor of the New International Dictionary of Old Testament Theology and Exegesis; and working on commentaries on Amos and Hosea that he had been requested to write for the New International Commentary on the Old Testament. All told, he authored as many as 319 scholarly articles and book reviews, and 14 books on a range of subjects including the Remnant, the Sabbath, covenant, divine judgment, creation/Flood/origins, resurrection, and speaking in tongues, just to name a few.

Hasel is remembered not only as a brilliant scholar, but also as a friend. Gerhard Pfandl, retired Associate Director of the Biblical Research Institute, General Conference of Seventh-day Adventists, remarks: “Even though he did not agree with the conclusions in my dissertation, he encouraged me to support them with better arguments and was instrumental in having my dissertation published. He was a conservative theologian, yet open for new ideas; the mark of a true scholar. I remember spending a number of enjoyable times in his home with his family and friends.” His children, all now grown, recall that their father was consistently “there for them,” taking month-long vacations for the sake of the family. They knew too, even as children, that their daddy worked for God.

Hasel was a constant contributor to the conversation on the center [German mitte] of Old Testament theology. He warned of the inadequacy of any single idea or concept to embrace the complex variety of Old Testament history, literature and truth. Davidson described Hasel’s theological proposal as a comprehensive multiplex Old Testament theology and showed how, through the decades since his death, major elements of that proposal have been implemented. He cited studies conducted in specific areas of Hasel’s recommendation such as chronological ordering of the theologies of books and blocks of writings; diachronic, thematic studies throughout the Old Testament and indeed the entire Bible; as well as interdisciplinary research that draws together systematic and biblical theology, and demonstrates the inseparability of theology and history. This last mentioned provides a pointed critique of the historical-critical approach to Scripture, and ensures that Old Testament Theology and systematic theology are both historical and theological from the beginning, allowing for the in-breaking of God into history; it exposes the unproductive character of faith in history as a closed continuum where humans are victims of a mere chance existence and doomed to inevitable oblivion.

The scores of interested attendees at the Hasel commemoration, comprised in significant degree of generations of scholars who have descended from Hasel and his students’ teaching, bear witness already that Davidson’s funeral appeal of two decades ago did not go unheard. Echoing the words of that sad yet earnest homily, we may confidently declare that acorns from the fallen oak of Hasel’s mighty witness and inspiration have grown up and flourished in the work for which he gave his life. Today they stand as their own trees and even forests of righteousness, all across the world of faith and of biblical scholarship.