A Story of Reconciliation at the Hospital Named for Ellen White 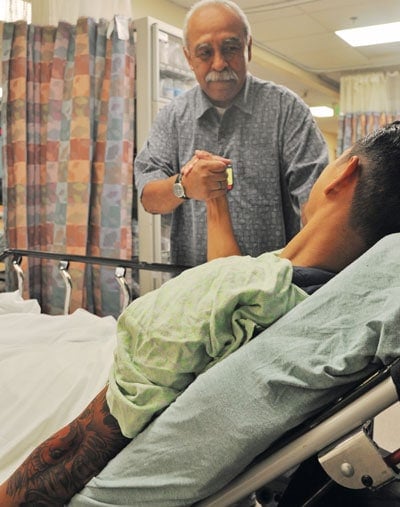 Twenty years after White Memorial Medical Center became the backdrop for a violent gang shooting, the atmosphere at the hospital is one of optimism, hope, and safety. While some of that has to do with security improvements, the rest, as anyone at WWMC will tell you, is due to the most unlikely type of security—the presence of an ex-gang member. A man named Mike Garcia.

And although it is part of the Adventist Health system, the hospital belongs as much to the local community as it does to them. And that’s how the hospital wants it.

There’s a level of community pride extended to White Memorial that didn’t happen overnight, and it’s not a pride handed out easily.

It was a century ago when White Memorial first opened its doors as a free clinic to the newly arriving immigrants. Withstanding two World Wars, a population explosion, and multiple natural disasters, the hospital had served generation after generation with a clear purpose and come to see itself as a sanctuary that even the gangs acknowledged.

With such a history, the hospital was shaken to its foundation in 1992 when a gang opened fire into the waiting room of the Emergency Department. They had heard a rival gang member was inside.

The incident had an immediate impact on everyone who worked there. Perhaps more than others, Emergency Department Director Dr. Brian Johnston was deeply troubled. He viewed the attack as a profoundly hurtful attempt at bringing pain to a place of healing. He wanted to respond—to both make sure something like this would never happen again, but also to let the community know that he and the rest of the caregivers at White Memorial were not against them, but were on their side. Most of all, he wished to reaffirm WMMC’s commitment to serving every member of their community—including gang members.

With this as his goal, Dr. Johnston searched out Mike Garcia, a reformed gang member. With funding approved for a new breakthrough program and the blessings and support of the hospital administration, he and Garcia set to work.

But to explain what the two-man team actually does, you should know a little about Mike Garcia.

An unexpected journey from gangs to reconciliation

Garcia’s life can be divided into two separate and very different chapters. The first begins in his early childhood and continues until his late thirties. This was a time period characterized by reckless, dangerous, and at times illegal behavior as from an early age he worked to climb the ranks of the gang hierarchy, earning a reputation along the way. He’ll be the first to admit that he caused a lot of hurt, both to those who cared about him and to himself, and that he’s thankful that part of his life is over.

The second half takes a sharp turn at age 40, when he was just recently released from prison. His first action, after getting his bearings, was to find his daughter who was living with his girlfriend. He quickly arranged a meeting.

Seeing his daughter, he was overcome with emotion, first of love, and then of anger at his girlfriend. He was furious that she was abusing drugs—even more so that she was doing this around his young daughter.

His decision to take his child, to kidnap her, would change the course of his life forever. Oddly enough, for the better.

Hiding from the police while he considered his options, Garcia was harbored by an elderly Christian lady. She extended kindness to Garcia, never prying or preaching, merely concerned about his welfare. Over the course of a few weeks, she slowly earned his trust and eventually convinced him to see a pastor.

With the pastor’s help Garcia was able, if he agreed to return his daughter, to get the charges dropped. And from that moment, he became a Christian and began to steer his life in a new direction.

For a while, Garcia bounced around between jobs, searching for a place where he could begin to undo the damage he’d caused throughout his life. For a time, he tried to set up a gang outreach program at another Los Angeles hospital. But there was very little precedence for such a program and funding was scarce.

The timing couldn’t have been better for Garcia and Dr. Johnston to meet. Johnston had been searching for someone he could bring to White Memorial with real experience, someone who could help the gang members who came into the hospital and wanted assistance either getting out of gangs, having tattoos removed, or finding real jobs. And someone who could preserve the historic safety of the hospital—keeping it as a neutral ground among gangs.

Garcia was just the person.

Building a new life as a gang interventionist

In the years since the founding of the gang intervention program, it continues to grow and gain influence. Other hospitals have watched with interest to see if it would succeed. And it has.

“When I was growing up it was a different time,” Garcia says. “There was no help for gang members. You either ended up in prison or dead. There was nobody in between trying to help you.”

This gets to the heart of the gang intervention program. The vulnerable nature of hospital visits often makes people reconsider their life choices. For gang members, this can be a pivotal moment. Garcia and Dr. Johnston can offer advice and resources to those searching for freedom from gang life.

Not surprisingly, working with gang members can involve suspense.

Garcia remembers one incident a few years back when a furious young man came into the Emergency Department demanding to see a patient. The hospital caregivers were unable to handle him, so they paged Garcia.

The man grew more and more combative. “You could see the hate in his face.”

“It got to the point where had I said the wrong thing he would have gone off. For five minutes he didn’t say nothin’. We sat there, looking at each other. Then after some time he relaxed and opened up.”

Garcia was able to convince him to leave without a fight.

Besides acting as a mediator and finding help, Garcia spends much of his time away from the hospital grounds visiting and talking with those in the community—and acting as the resident peacekeeper. He sees this as key to maintaining positive relations.

Going out has its dangers, and some areas he visits aren’t safe—to put it lightly. He’ll tell you about the close calls.

“A lot of times these guys [gang members] have shot at me mistakenly,” he mentions offhandedly.

“Two weeks go by, and I’ll see them, and they’ll say all sheepishly, ‘We’re sorry about that time we shot at you, Mr. Garcia’.”

“That comes with the territory,” he says.

A mission of healing in the inner city

This is the second chapter in the life of Mike Garcia. This is the part where he becomes an example for others, working hard towards a goal and weaving a story of reconciliation and peacemaking that serves as a living metaphor for the hospital’s desire to bring together the broken pieces of people’s lives. In the years since he and Dr. Johnston began working together, they’ve helped hundreds of gang members when they needed help, treating them with dignity and respect.

In the face of all the talk about violence, Garcia, more than anyone, knows that there’s no better way to make a difference than to go out and face the danger.

In all the right ways, Garcia is an example for the better—an example that is spreading throughout the Los Angeles hospital systems as they see the program's success.

And in doing so, Garcia is helping to create a circle of reconciliation and peace not only in the community, but for countless individuals—while making the hospital safer for everyone.

Today, Garcia's daughter, the catalyst for his journey, is a part of his life. Though initially he was forced to give up rights to her, when she reached 18 they were able to become reacquainted. And while Garcia will admit it was painful to give up those precious moments and wishes he could have that time back, he believes the relationship they now share has made the hard work of rebuilding his life worth it.

Garcia is living proof of the reality of second chances and a reminder that the work of healing, as White Memorial believes, includes caring for matters of the heart.

White Memorial celebrates its 100-year anniversary this year. For more stories and videos about their remarkable journey of faith and resolve, visit whitememorial.com/centennial.