A Member of Burmese Royalty Becomes an Adventist Pioneer 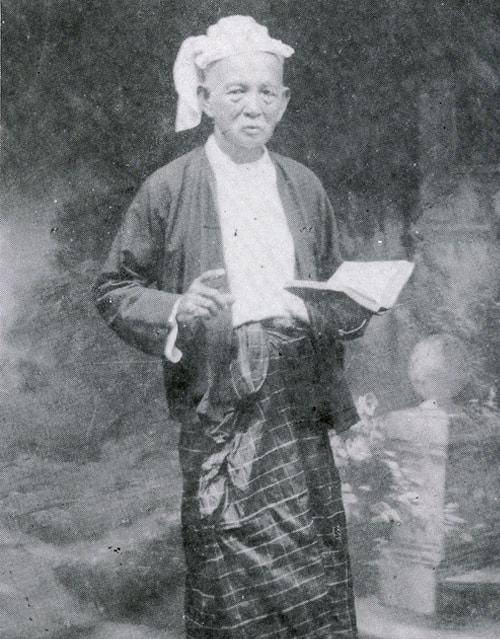 The Encyclopedia of Seventh-day Adventists (ESDA) is now live and freely accessible at encyclopedia.adventist.org. Launched Wednesday, July 1, at Seventh-day Adventist Church headquarters, the project involved nearly 1,000 writers from all world Church divisions and attached fields, and features over 2,100 articles, photographs and other historically significant documents. New articles are being added to the encyclopedia as time goes by. We invite you to visit us at encyclopedia.adventist.org for education and insight on the history and structure, culture, theology and more of the Adventist Church around the world. The following story is based on a longer article from the encyclopedia. Eds.

Maung Maung was one of the founders of the Seventh-day Adventist Church in Myanmar.

Maung Maung was born in Moulmein (now Mawlamyine) on May 7, 1862. Maung Maung’s father and grandfather were descendants of an old Burmese noble family. His mother was a granddaughter of Thumana, the last king of the Mon Kingdom of Baraivati; his father was Maung Baik, a Wun, or governor, of Henzada under the king of Burma just before the second Burmese war. His father, mother, and grandfather, Prince Suthi, were converted to Christianity and baptized by Dr. Adoniram Judson in Mawlamyine and were among the early converts.1

Maung Maung received a good education, having an interest in medicine and the care of the sick. He married a Mon woman named Aye May, and they had only one daughter, Ma Than Tin, who became the beloved wife of U Saw U, and the best translator in the Myanmar Adventist church.

Maung Maung heard the Sabbath message from his sister, Mah May. Shortly before the first Seventh-day Adventist missionary came to Myanmar, his sister learned from reading her Bible that Saturday was the Sabbath, God’s holy day, and she began to observe it. Later, H. B. Meyers, the pioneer colporteur in Myanmar, held Bible studies with her and Maung Maung, with the result that Maung left his good-paying government position and began to preach his newfound faith among the Burmese people at his own expense.2 Brother Maung translated a number of tracts and printed them, paying the cost with his own money. He refused to take anything from the mission funds for printing.3

In 1904, Maung attended a meeting of Seventh-day Adventist workers in Calcutta, again at his own expense. His plea for the establishment of regular Adventist work in Myanmar led to the assignment of Heber H. Votaw to the field. Maung himself was in the first group to be baptized by Votaw, who arrived in Myanmar in 1905. On Sabbath, March 23, 1907, the first church in Myanmar was organized by Votaw and G. B. Thompson with 23 members. The next day, nine persons were baptized by Votaw amid the beautiful surroundings of the Royal Lakes. The officers of the first Adventist church in Myanmar were Heber H. Votaw, elder; Maung Maung and David Hpo Hla, deacons; Anna Speer, church clerk; and Carolyn Votaw, treasurer.4

For nearly 30 years, Maung Maung gave his time and strength to preaching in the villages and towns, treating and praying for the sick, translating and writing, and pastoring and evangelizing. He was ordained in 1927, near the close of his service.5

Maung Maung wrote the following articles: “The Law of God Written in the Heart,”6 and “The Second Coming of Christ.”7

Maung Maung died in Thonze, Myanmar, on July 2, 1936.8 Early in the year he contracted dysentery, and his strength gradually failed. He was conscious until the last and assured those with him of his hope in the first resurrection. He left behind his wife, an adopted daughter and her family, and an older brother, besides other relatives. Although the funeral was held on a rainy day, about 500 Christian and Buddhist friends attended.

Suak Khaw Ngin was born in Chin State, Myanmar, and has served as a pastor, teacher, principal, departmental director, and seminary professor.