A Male Champion in Rwanda 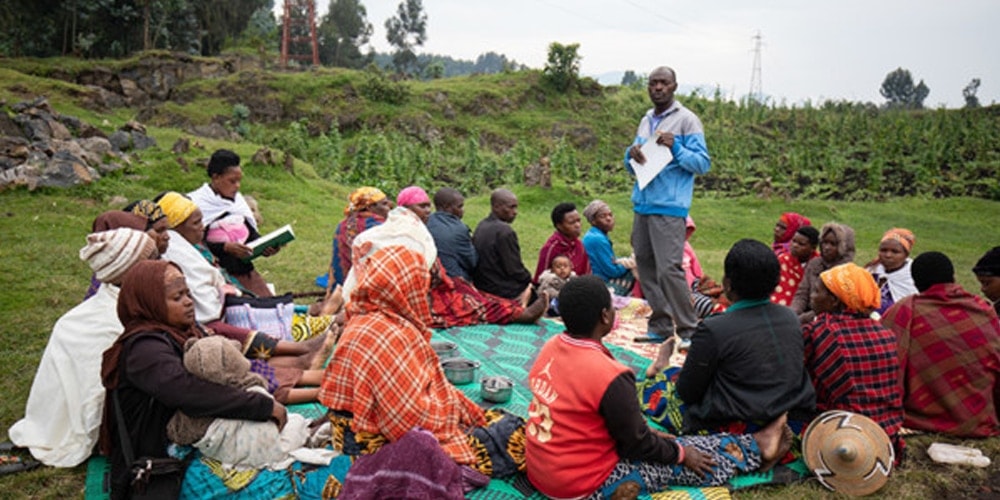 By: ADRA Canada, and Adventist Review

Vincent is a small-scale farmer in Rwanda. To make more money for his family, he takes work as a casual laborer whenever he can. He also often helps technicians in the plumbing industry as they repair water pipes and earns about US$1.20 a day for his efforts.

When ADRA started the EMBRACE project in Vincent’s village, his wife decided to join. They have four young children, and they had heard that the EMBRACE project would teach them how to keep their children strong and healthy. They also had heard that EMBRACE would teach them ways that they could improve the family income and build stronger relationships with their children and their neighbors.

Every time that Vincent’s wife came home from an EMBRACE meeting, she was full of enthusiasm about all of the things she was learning about health, nutrition, and home gardening.

One day, Vincent asked her if there were any men in the group. He was interested in going to the classes himself but was not sure that he wanted to be the only man. After about three months he finally decided to join, even though he would be the only male.

Being a group member enabled him to join the small savings and loans group that EMBRACE had started. Vincent had never held a bank account before. Getting a small loan to cover a family emergency had meant going to a neighbor or a loan shark who would charge a lot of interest. “As a member of EMBRACE,” Vincent said, “I began to save money every week, just as if I had a real bank account!”

Vincent and his wife have a new, wonderfully secure feeling in their hearts, knowing that if they ever need a small loan to cover a medical expense for one of their children, they will be able to easily get one from the group.

The agricultural training that they learned from EMBRACE has changed their lives. With the new, drought-resistant seeds they got from ADRA, the family has seen a 500-percent increase in the income from their farm. The kitchen gardens that they have started around their home are producing a variety of organic vegetables. “My family now enjoys a healthy, balanced diet,” Vincent said.

The most life-changing aspect of EMBRACE for Vincent has been the training that ADRA gave on gender equality. Vincent shared that one day, the EMBRACE trainer began talking about gender equality and gender roles.

“The ideas they shared that day were totally new to me!” Vincent said. “As a boy, I had grown up in a home where the roles of men and women were clearly defined. When I got married, I simply adopted the same roles that my father had always done. When I came from the farm, I would be tired and would simply rest. I could see that my wife was also tired of her household tasks, but that was her work, ‘women’s work,' not mine to worry about.”

Vincent said that EMBRACE changed his way of thinking. He shared how ADRA suggested that if he were to start helping his wife with her work at home, he would find joy in that and experience many benefits.

“I decided to try it and see,” Vincent said. “I started helping my wife with cooking, cleaning, and playing with the children when I came home. I would even take whole days off from my work to do childcare and household tasks so that my wife could have a full day out.”

Vincent shared that when his wife would return home and find all of the household work done, she was more than happy.

“I found out that ADRA was right,” Vincent said. “My relationship with my wife and children has really grown. We are so much happier now. Now, instead of divided roles, we work together in a partnership!”

Vincent said that when ADRA heard about this, they asked him to become the “Male Champion” of his village. He readily accepted.

“As the ADRA Male Champion, I share my experience with the other men in the village,” Vincent said. “Some of them tease me that I am doing ‘women’s work,’ but I just smile and tell them how happy my wife and I are. Some of the men have now joined the EMBRACE group and are trying some of these same things themselves. They are also finding out all the benefits of becoming more involved with the daily life and routine of your wife and family.”

The EMBRACE initiative is a four-year project being conducted in remote communities in Rwanda, Cambodia, Myanmar, and the Philippines. EMBRACE is carried out with the financial support of the government of Canada through Global Affairs Canada, and ADRA Canada’s faithful supporters.

Vincent said he is thankful his wife started going to EMBRACE and got him to join as well.

“I want to thank ADRA and the people of Canada for all of the help that they have given us through EMBRACE,” he said.