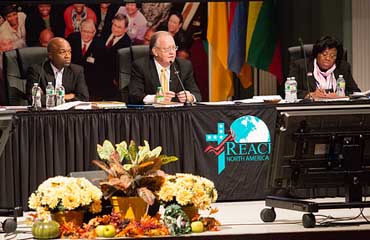 Seventh-day Adventist leaders in the North American Division (NAD) voted a $500,000 emergency relief grant for victims of Hurricane Sandy, which struck the northeastern United States on October 29-30. A special collection is to be taken on November 10 in congregations across the division and might raise an additional $500,000 or more, and the Division also asked the General Conference to release funds for disaster relief.

The action was taken midday on November 4, 2012, as more than 300 delegates and leaders of the Seventh-day Adventist Church met in Silver Spring, Maryland, for the NAD’s year-end meeting. Regular business included reports on membership statistics and the unveiling of six “building blocks” of mission for the region.

Pastor Dan Jackson, NAD president, told delegates that the Division was “taking money from our reserves” to finance the effort. He added, “I believe that shows the heart that we are trying to express. We are fast-tracking this whole thing.”

The moves came in response to emotional pleas for assistance from church leaders in the affected region: “We appeal to you to do everything you can to relieve suffering,” Daniel Honoré, president of the Northeastern Conference, based on Long Island, told delegates. Having been without electricity or heat for nearly a week before arriving in Maryland for the session, Honoré said that reaching out to others in the area is an optimal preparation for NY13, the Adventist outreach planned for metro New York next year.

“I believe there are people who would never come to our meetings because we sent them a brochure in the mail,” Honoré said, “but now we have an opportunity to reach the masses in New York through our kindness and our love. If we truly believe NY13 can be a major evangelistic success, [let’s] meet the people's needs, and let's make friends with this metropolitan area, and when we stand to preach the gospel, thousands will come.”

Pastor José Cortés, New Jersey Conference president, spoke of the devastation in the Garden State and the need for action: “I need to tell you ... they called this storm the ‘Storm of the Century,’ he said. “In New Jersey, from Cape May to Hoboken, all the coastline is destroyed. Thousands of families lost their homes, clothing, everything. We as a church need to give the ‘Response of the Century.’ It’s not just our praying; it is a moment to act.”

Greater New York Conference president G. Earl Knight echoed the thoughts of other leaders in calling for help: “Right now there are Seventh-day Adventists in New York City who don’t have electricity and will be sleeping in their homes at 30 degrees Fahrenheit or below.”

Donald King, Atlantic Union president, also noted the relationship of emergency relief to the upcoming evangelistic outreach: “How are we going to preach to our [neighbors] if we have not first had the opportunity to let them know that Jesus loves them?”

Along with the NAD-voted contribution, Luis Torres of the Guam-Micronesia Mission said the unit would donate $20,000 and Pacific Union Conference president Ricardo Graham announced a $10,000 donation as well.

Earlier in the day, Jackson reviewed a year’s worth of visits he had made, trips which he said reflected the vibrancy and diversity of the Division. At the same time, the “mother division” of the Seventh-day Adventist world church is facing challenges, he said, and Jackson enumerated several goals for the area:

In that latter regard, NAD education vice president Larry Blackmer said the division would seek to launch an integrated educational network, online, offering training to Adventist young people, homeschooled and in non-Adventist schools, as well as college level courses and continuing education for pastors, church workers and volunteers.

This will need to be a collaborative project,” Blackmer said, asserting it is “a core value of the Adventist Church not only to educate our youth, but to connect all of our ministries together.”

Blackmer said the division was ready to launch “a platform of ‘Education for Everyone.’ We are ready to begin delivering the ability to connect this church as never before.”

Another NAD vice president, R. Ernest Castillo, reported on the church’s outreach to multi-lingual ministry groups, noting that nearly 352,000 of the division’s 1.154 million Seventh-day Adventists are from those communities.

“God has commissioned us as a Seventh-day Adventist Church to preach the everlasting gospel,” Castillo said, noting “about 55 percent of baptisms in 2011 came from these ministry groups -- the mission field is coming here!”

NAD young adult ministries director James Black Sr. and associate director Manny Cruz presented a third building block –retaining young adults in the Seventh-day Adventist movement. Noting the losses of young adults after their educational years, Black said, “We ought to go for every single Adventist young adult that we can possibly get back from the enemy.  The time has come to get them back.”