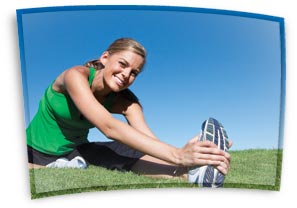 Kimberly Luste Maran
I was running late. I made it onto the turf just before the referee blew the whistle. No time to stretch before I was dashing around during a women’s outdoor soccer league game. I made a point of stretching my quadriceps and hamstrings during the minutes I subbed out. My right heel was hurting a little, but I ignored it as I sprinted up and down the midfield.

With about five minutes left in the match I was dribbling up the center. Looking to pass to my right I ran a few steps when I felt a pop in my heel, a gushy warmth, and severe pain. Calling for a substitute, I limped off. I pulled off my cleat and sock. Rarely ever injured beyond minor ankle sprains, I knew this wasn’t good.

After a sprinkling of doctor appointments, the diagnosis was a severely pulled tendon in my heel. I was told to stay off it for two weeks, use crutches, and avoid sports for two to three months. My humanity betrayed me. My not-so-young-and-pliable parts, coupled with scanty preparation, did me in. I wasn’t ready to run and I did anyway.

Age creeps up on all of us—and I’m not just talking about physical aging. Mentally we get tired. Intellectually we get complacent. Maybe suffer a bit of ennui. Spiritually we get accustomed to where we are: status quo is good enough for us, and based on our prior experience, our prior ability, we believe we can withstand any assault. We’re sure our former capacities, our youthful prowess, will leap to spry usefulness when needed. Instead, with our rusty thoughts and skipping mental cogs, we won’t be prepared and we’ll bend, break, collapse.

At one time those words would’ve seemed harsh, too alarmist. But my injured heel did one good thing—it brought about the sharp realization that I must confront the fallaciousness breeding in myself and others.

I’ve had conversations with at least a dozen people in the past few years in which they’ve indicated that they learned all they need to know about “God and stuff.” When the time comes, they’ll be ready to run with the truth. They’ve told me it’s like riding a bicycle—a person never forgets how once they’ve learned. I let them keep their delusion. But I won’t again.

As an Adventist I believe that regardless of “age,” the learning, the improving, never stops. “We have a work to do every day of our lives in improving our God-given abilities. He has given to us reasoning powers, and we cannot in any way weaken those powers without being called to an account by the righteous Judge of all the earth. He has given us talents, which, if rightly employed, will increase our ability to work for the Master” (Ellen G. White, in The Present Truth, Nov. 3, 1885).

White also states: “The only way the truth can be presented to the world, in its pure and holy character, is for those who claim to believe it, to be exponents of its power. The Bible requires the sons and daughters of God to stand on an elevated platform; for God calls upon them to represent Christ to the world. As they represent Christ, they represent the Father. . . . The treasures of truth and knowledge have been bestowed upon us without limit, and we are guilty in proportion to our failure to live up to the truth that has been placed within our reach. . . . In this work there should be no indolence indulged in, for God calls upon men for the exercise of every power, that He may work with their efforts” (Review and Herald, Feb. 25, 1890).

Jesus said it best: “To the Jews who had believed him, Jesus said, ‘If you hold to my teaching, you are really my disciples. Then you will know the truth, and the truth will set you free’?” (John 8:31, 32).

If I choose to keep up the groundwork, prepare and stretch myself (and help bring truth and light to others), not only will I be ready to run in heaven, I’ll be unfettered, unshackled from current constraints. I’ll be ready to run. Being primed for that is worth every effort now.