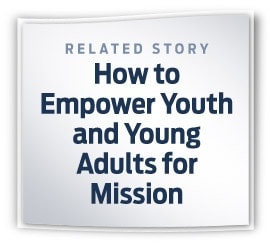 BY SANDRA BLACKMERSixteen-year-old Kaury Allen isn’t the typical student colporteur. Growing up in a low-income area of New York and then later Philadelphia, Kaury spent most of his time hanging out with friends on the street and frequently getting into trouble. His mother did her best to keep him “on the straight and narrow,” but times were tough.

One night Kaury was arrested for being out after curfew. The police officer who hauled him in, however, agreed not to call Kaury’s mother and to keep the infraction off his record if Kaury would go to PAL (police athletic team) meetings and do community service every day until the end of the school year. That’s what Kaury did; but it didn’t end there.

“Even after I was finished with community service, Officer Jones* would check on me,” Kaury says. “He would come to my school and say, ‘Kaury, how are you doing?’ He was really looking out for me.”

Three years later Kaury was again standing on a street corner in Philadelphia—but this time with a fellow colporteur. He was one of 30 youth selling Seventh-day Adventist publications called magabooks (books that are printed in a magazine format) door to door in order to earn money to attend an Adventist academy or college. Pointing down the street, his partner said, “Kaury, why don’t you go to that house where the guy’s outside and then work your way down that side of the street?” Kaury picked up his bag of books and headed for the house.

Kaury introduced himself to the homeowner, and then the man asked, “You’re Kaury Allen?”

“Yes, sir. My name’s Kaury Allen, and I’m working on a scholarship project.”

What’s this guy talking about? Kaury thought. Then the man said, “You don’t remember me? I’m Officer Jones.”

“I looked at him in shock,” Kaury says. “I couldn’t believe it was the same person who had been so good to me.”

Kaury explained to Jones that he was working on a scholarship to attend a Christian school and shared what God had been doing for him—that the Lord had changed him, that God had a plan for his life, and that he had made the decision to be baptized that summer. When Officer Jones heard this, he started to sob. Finally he blurted out, “I’m constantly arresting youth. I’m constantly being nice to them—doing things so they can see that I actually care about them. But then I see them getting locked up again, getting arrested again, committing crimes. I was starting to think that my job as a police officer was worthless. But now you, the same kid I arrested and gave another chance to—I see that you’ve turned your life around. I can’t believe it.”

After they talked for a few minutes, Officer Jones purchased two books, and Kaury also gave him a copy of Steps to Christ. Kaury then prayed with him.

Kaury explains the encounter with a simple philosophy: “God spoke to my partner so she would tell me to go to that house,” he says. “God is constantly setting up our paths in life.”

What Are Magabooks?
The summer magabook program in Philadelphia, called Pennsylvania Youth Challenge (PYC), is headed by Tara VinCross, senior pastor of the 200-member Chestnut Hill Adventist Church and REACH church plant since 2008. For nine weeks academy- and college-age youth walk the streets of Philadelphia knocking on doors to sell books written by Ellen G. White (such as Christ’s Object Lessons, The Desire of Ages, and others), as well as children’s books, cookbooks, and health journals. They’re designed as large, soft-cover books—an amalgamation of a book and a magazine. Students can earn up to $5,000 in scholarship funds. Adventist academies and colleges then match this with a percentage of the student’s earnings, some up to 100 percent.

Earning tuition money is only one of PYC’s goals. VinCross also encourages the student workers to pray with the people they meet.

“This last summer the students prayed with more than 12,000 people,” VinCross says. “It’s an amazing ministry. I tell the young people to watch for where God might be trying to speak through them to someone’s life. And we’ve gotten more Bible studies this summer than ever before—about 75 to 100 a week.”

PYC also focuses on the spiritual health of the students themselves. VinCross is committed to helping Adventist youth grow in their relationship with Jesus and to training them for evangelism.  For the past three summers—?2009-2011—with the help and support of her church and local conference and union leaders, she has been able to accomplish both those goals.

“My mission is for the students to meet Jesus Christ and to be transformed,” VinCross explains. “Then they go back to their schools and local churches to be youth leaders or to serve on their boards or to get involved in their communities. They become instruments of God—watching Him transform others through them. What they learn through PYC makes such a tremendous difference.”

How Does It Work?
VinCross spends a week training student leaders before everyone “hits the pavement.” She also has Bible studies with the group throughout the summer.

“We study salvation, the Sabbath, righteousness by faith, the state of the dead, the sanctuary, spiritual gifts—and we study these topics based on Scripture,” VinCross notes. “I give them time for prayer journaling, reflection, and learning about how God speaks to them from the Word. I pair them up so that they have a prayer partner, or spiritual companion, throughout the whole summer.”

While canvassing, the students have a different work partner each day. They canvass across the street from each other so that “they can keep an eye on where the other person is,” VinCross says. They also carry radios to contact the group leader, who transports them to their territory each day. “Safety is a prime concern,” she says.

The students distribute brochures with contact information for the local Adventist church in the territory in which they’re working. They also make a note of those who say they’re interested in Bible studies, health and cooking classes, children’s ministries, or Christian education. The local church members are trained ahead of time to follow up interests promptly.

“Our Columbia Union Bible trainer, Lillian Torres, begins meeting with church leaders six months before the kids arrive,” VinCross says. “She trains and works with the pastor and the local leadership so that everyone is ready for follow-up.”

At the end of the nine weeks several of the PYC workers, who were also involved with both a local and an international evangelistic series of meetings, went to Kenya, and 400 people accepted Jesus and were baptized. The group also is scheduled to hold a series on the Temple University campus in Philadelphia in the spring of 2012.

“Young people should do something like this every summer,” says Cody Smith of York, Pennsylvania, a three-year PYC veteran. “We see ourselves as soldiers for Christ on the front lines. . . . [The experience] goes from testing our faith to strengthening our faith. It’s a privilege to do this.”

How Did It Get Started?
The idea to help students earn tuition money by selling magabooks originated in 1987 with Glenn Aufderhar, president of the Michigan Conference at the time. Based on Ellen White’s statement that Christ’s Object Lessons is a book that she expected would defray student tuition costs and help schools with their debts (see Counsels to Parents, Teachers, and Students, pp. 526, 529), Aufderhar and Review and Herald Publishing Association marketing director Dick Thomas came up with a plan to publish 12 chapters of Christ’s Object Lessons in a magazine/book format and make it available for students to sell door to door. They partnered with Adventist-laymen’s Services and Industries (ASI) to fund the project, and in 1988 asked Cindy Tutsch, at the time a Bible teacher at Great Lakes Adventist Academy in Cedar Lake, Michigan, to direct the first student summer program selling magabooks from the Cedar Lake base.

Tutsch served as youth director for the Washington Conference from 1994 to 2000, where she continued the program. VinCross worked with Tutsch on magabooks for six summers there, eventually becoming associate director of the program. Tutsch then accepted a call to be an associate director of the White Estate in Silver Spring, Maryland. The magabook program is now run each summer by several conferences in the North American Division as well as in other divisions.

Tutsch’s continued support is evident. “I can’t think of any better way for students to learn responsibility, punctuality, leadership skills, positive attitude, accountability, and, most of all, the love of Jesus and how to serve Him as a true disciple than through literature evangelism and the student magabook program,” she says.

What Do the Students Think?
Walking city streets and knocking on doors in temperatures teetering at 100 degrees Fahrenheit is not for the faint of heart, especially when person after person expresses no interest in purchasing the books. But the students say that they are prepared for this, and that their faith rests in Jesus.

“It’s discouraging at times, especially when people reject you,” says Steve Maaliao of Philadelphia. “Every day I have to go back to Christ, to the reason this work must be done. . . . The gospel message has to be spread.”

Cody Smith agrees: “Even if people reject you, know that you are doing this for Christ,” he says. “How hard is it to take that rejection when Christ gave His life for us?”

The success stories, however, are abundant. With a total of 10,000 books sold on average throughout a summer in the Pennsylvania program alone, these young adults take home many encouraging reports.

Dana Connell of Berrien Springs, Michigan, one of PYC’s leaders this past summer, says her experience opened her eyes to the many people who want to know more about God.

“It makes my heart beam to hear all the stories and see how God uses each one of the students uniquely to reach others,” she says.

Delon Lawrence of Philadelphia, for example, went to the home of a man who described himself as an atheist. He told Delon that God didn’t create the world; rather, it came about through evolution. Although Delon explained that he believed in creation, he didn’t debate the issue. Instead, he talked of God’s love and what He had done for Delon personally. By the time Delon left, the man had purchased two books: The Great Controversy and The Desire of Ages.

“The guy made such a turnaround,” Delon says. “You could just sense the presence of the Holy Spirit.”

Gerard St. Hilaire of Apopka, Florida, says those who are interested in applying to PYC should consider three points: (1) Do you want to learn more about yourself and about God? (2) Do you want not only to have a relationship with God but also to commit your life to Him? (3) Do you want to be challenged?

“If you answer yes to those three questions,” Gerard says, “then you’ve got to do this work. You will experience all these things—I guarantee it.”

To learn more about PYC, go to payouthchallenge.org.