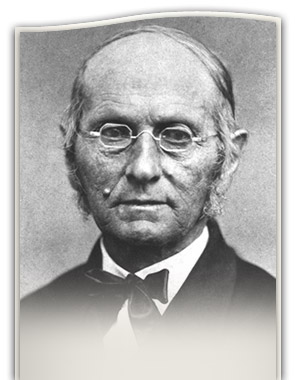 The most remarkable man in our early church was also the first Seventh-day Adventist. An ex-sea captain, he was affectionately called “Father Bates” by Ellen White and the younger generation of believers. Without question Captain Bates was the father of the young Seventh-day Adventist Church—and it is possible that without him there would not be a Seventh-day Adventist Church today.
Born on July 8, 1792, in Rochester, Massachusetts, young Joseph moved with his parents, Joseph and Deborah Bates, to New Bedford, the whaling capital of the world, when he was just 1 year old. Named after his father, Joseph was the fifth of seven children.
Fishing, whaling, trade, and shipping dominated all aspects of New Bedford life. On nearby Johnny Cake Hill stood the Whaleman’s Chapel, with its pulpit built to represent the prow of a ship. This pulpit was ascended by a minister, a former whale harpooner, by means of a rope ladder, which he drew up after him.
Growing up in this atmosphere, young Joseph wanted to go to sea as soon as possible. His parents tried to dissuade him, but in 1807 he shipped out to sea as a cabin boy at the age of 15. For the next 21 years he would be a seaman, and he retired a fairly wealthy man.

In his autobiography written for the Youth’s Instructor, Bates recalled many of his sea adventures. One of the most exciting was his encounter with a shark. He had been out to sea just three weeks when the sailors spotted a huge shark following on one side of the ship. They fastened a large piece of meat to a rope and tried to get the shark close enough to harpoon it, but without success. That evening Joseph, in the course of his duties, had to climb up the main masthead. On his way back down he lost his footing and fell overboard where the shark had been all day. The first officer saw him fall and saved his life by hurling a rope that Joseph was just able to grab. They dragged him in, and he was not hurt. Then they all remembered the shark! The crew ran to the other side of the ship, and there was the shark gliding serenely along. Bates always believed that it was a miracle how the shark “came to change his position to a place where he could neither see nor hear what was transpiring on the other side of the ship.” That was just the first of many times that the life of Joseph Bates was spared.
Prisoner of War
Probably his most trying experience was as a prisoner of the British during the War of 1812. At that time the British used impressment to fill the ranks of their Navy. One April evening in 1810, 12 men and an officer entered a boardinghouse in Liverpool, England, where they “seized and dragged” Joseph Bates and some other Americans and put them in jail. The next day Bates and those with him were forced into the British Navy. Bates served on two large Royal Navy fighting ships. In 1812 the United States declared war on England because of the impressment issue and maritime rights. Bates and his American companions demanded to be made prisoners of war, as they refused to fight against their own country. The British granted their request, and as prisoners of war they were confined on various prison ships. After numerous escape attempts, Bates and his friends were sent to Dartmoor Prison, a damp and dreary place near Plymouth, England. While there, Bates witnessed the “massacre,” when British guards opened fire on the prisoners, killing seven and wounding 60.
Finally the Treaty of Ghent was signed, and in April of 1815 Bates returned home a free man. After an absence of more than six years, Bates received a warm welcome. Among those who welcomed him was a childhood friend, Prudence Nye, who in 1818 became his wife.
Between 1815 and 1828 Bates set out to make money. Maritime trade boomed, and his sea knowledge was in demand. He was away from home much of the time, and he eventually became captain and part owner of his own ship. By the time he retired in 1828, Bates had made a fortune and could have lived comfortably the rest of his life.
Millerite Preacher
Captain Bates retired from the sea at the age of 36, determined to devote the rest of his life to his family, his community, and various reform movements. He soon heard about William Miller, obtained a copy of Miller’s book of 19 lectures, and studied it thoroughly. He had known Joshua V. Himes, famous in the Millerite movement, when he lived in New Bedford for a time and the two had worked together on temperance and anti-slavery reforms.

Prisoner of War: Entrance to Dartmoor Prison, near Plymouth, England, where Joseph Bates suffered under miserable conditions during the War of 1812.

Bates entered wholeheartedly into the Millerite movement and was one of the original 16 signers of the call for a general conference of believers in 1840. He also arranged to have Miller lecture in Fairhaven in March 1841, and chaired several regional conferences of the Millerites.

Wholeheartedly believing in the Millerite movement, Joseph Bates gave his entire fortune to the cause, finally even selling his home. He lived the rest of his life with the motto “The Lord Will Provide.” He then set out to take the Second Advent message south to Maryland. This trip had some dangers, since most Advent preachers were identified as abolitionists. He encountered much opposition, but his courage carried him through some very dangerous situations.
When Christ did not come in the spring of 1844, Bates began preaching the “Midnight Cry” in earnest in New England. He spent the final date set for Christ’s return, October 22, 1844, at home with his wife and family. When Christ did not return, he was devastated, not realizing that an important part of his life was still ahead of him.
Seventh-day Adventist Leader
In March of 1845 Bates read an article by T. M. Preble about the seventh-day Sabbath. Convinced that this was truth, he accepted the Sabbath and proclaimed it, even though his wife did not accept the seventh-day Sabbath until 1850.
Shortly after accepting the Sabbath truth, Bates wrote a 48-page tract entitled The Seventh-day Sabbath, a Perpetual Sign. Hearing of some Sabbathkeepers in northern New Hampshire, he traveled there to meet with Frederick Wheeler and studied all night with him. These two men then proceeded to Washington, New Hampshire, to see William Farnsworth and some others in what has been called the first Seventh-day Adventist conference. That visit reinforced Bates’ belief in the Sabbath. He had already accepted the sanctuary doctrine, as well as the belief in Christ’s second coming. Wanting to share his convictions, he set out to publish on the doctrines of the Sabbath, the sanctuary, and the Second Coming, and thus began the publishing work of the Seventh-day Adventist Church.
He was also the first Adventist preacher to combine these three distinguishing doctrines with the recognition of the gift of prophecy in Ellen White. At first skeptical about her gift, Bates questioned Ellen regarding a vision she had involving astronomy. As a former sea captain, he was familiar with the subject, while Ellen admittedly was not. Nevertheless, Bates could see that her vision, despite Ellen’s own lack of knowledge of astronomy, was completely accurate. He became convinced that the gift of prophecy was real and became a staunch supporter.
Having fixed these doctrines in his mind, Bates set out to find the “lost sheep” of the Millerite movement and present to them the new light. He set out on foot, using trains when possible, to take his message to every ex-Millerite he could find, traveling across New England and into Canada, as well as into the western frontier states of a young America. Wherever he went he organized the believers into groups and prepared leaders for them. People naturally trusted this kindly gentleman, and his sincerity was never doubted.
Later on Bates helped organize churches and conferences, often as chairman. In those years there was much opposition to any attempt at organization. As one of the Millerite ministers had stated: “The minute a church becomes organized, it becomes Babylon.” But both Joseph Bates and James White, another early church pioneer and husband of Ellen White, knew that there must be an organization with an official name, or all would be chaos. The debate on organizing continued until a conference was held in Battle Creek, Michigan, in September 1860, which Bates chaired. After the point that the church’s rights to hold property could be secured only by incorporation under the laws of the state was made, the tide turned in favor of organization.

Popular Book: Joseph Bates' book on the Sabbath, originally published in 1846, is still being ready today.

After more debate a name was chosen and the first big step toward organization was taken in May 1861, in incorporating the Seventh-day Adventist Publishing Association under the laws of Michigan. In October 1861, at a meeting in Battle Creek, the Michigan Conference was organized, with Joseph Bates again as chairman. In 1863 the General Conference was organized. One wonders, given the heat generated over incorporation, if any organization could have been achieved without the influence and steady hand of Joseph Bates.

The Reformer
Joseph Bates was a natural reformer. Perhaps his years at sea with rough sailors convinced him of his need to reform his private life. As early as 1821 he resolved never to drink another glass of strong liquor. The next year he included wine in his resolve. The following year he ceased using tobacco. In the early 1830s he stopped drinking tea and coffee. Ten years later he had given up meat, butter, grease, cheese, pies, and rich cakes. Back in 1827 Bates had helped organize the Fairhaven Temperance Society, one of the first such societies in the U.S.
In the early years of the Advent movement, Bates became the leading health reformer of the church. Years before Ellen White had her health reform vision of 1863, Bates led the way, mainly by example, as the perfect specimen for health reform. He remained remarkably free from illness, except for bouts of malaria, which was common among those living in Michigan at the time. Only a short while before Bates passed away, John Corliss, a young man who agreed to travel with him, stated that Bates “stood as straight as a marble shaft and tripped about as lightly as a boy.”
It would be hard to overestimate the significance of this great man in the founding of the Seventh-day Adventist Church. With his energy and influence in the initial foundational period, and with his complete acceptance of Ellen White as a prophet, Seventh-day Adventism was given the jump start it needed to succeed as a denomination.
__________
Nathan G. Thomas is a professor emeritus of Pacific Union College in Angwin, California. He taught history at PUC from 1967 to 1994. This article was published April 28, 2011.
Advertisement
Advertisement