As Things Unravel: An Adventist Ponders the Middle East 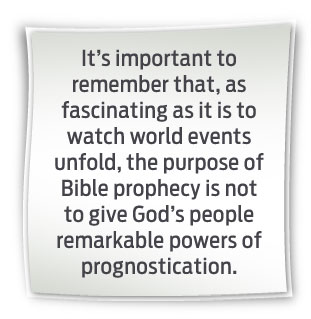 Shawn Boonstra
When the first Gulf War broke out, I discovered that my little black-and-white television was good for more than late-night reruns of Bonanza. I found myself glued to footage of anti-aircraft tracer bullets over the night skies of Iraq, half-wondering if some of the evangelicals I knew at the time were right. Would Saddam Hussein launch a Scud missile at Jerusalem? Was Armageddon a literal battle in the Middle East, and was I watching its opening moments?
My gut said no - but still, I couldn’t help but wonder. Talk of World War Three and the inevitable rapture of the church was everywhere, and so, like millions of people, I took careful note of every new development. I had, after all, thumbed through a copy of The Late Great Planet Earth at some point in the past. The war in Iraq provoked a lot of questions, and my re-awakened interest eventually led me through the doors of the Seventh-day Adventist Church.
Nothing demands world attention quite like trouble in the Middle East. There are African nations that have struggled with far worse internal problems than either Egypt or Libya, but they don’t get nearly as much airtime in Western media. For example, in the first quarter of 2011, more than 70,000 people desperately made their way to a refugee camp to escape the fighting in Darfur.1 That’s fourteen times as many people as lived in my hometown, and that larger group was tragically displaced and living in tents. Yet it doesn’t arrest attention or provoke Western response like Gaddafi’s struggle to retain power.
Why? There’s no question, in my mind, why evangelical America is watching Libya and Egypt so carefully. They’re expecting this path to eventually lead – somehow – to Israel. There’s also little question why secular America is watching: any political shift in Muslim nations becomes important when there are multiple anti-American groups that would love to seize power. (Of course, there’s also that uncomfortable tether we have to oil producing nations.)

But Seventh-day Adventists watch the Middle East from a unique perspective. Revelation 13 describes a coming religious coalition – one that involves the “whole world.” We have an easy time imagining how Christian America might coalesce, and we can see building pressure from Rome in Europe. But those nations have a long history of Christianity, even if the faith is no longer widely practiced in some. The question that leaves us scratching our prophetic noggins is how rapidly expanding Islam might factor into the picture – a broad and complex faith group that has frequently been at odds with Western Christianity.
It’s not that there hasn’t been some motion in the expected direction. Rome has at least one door through which to build dialogue with the Muslim world: the Virgin Mary. She holds a place of high regard in the Koran, and it hasn’t entirely escaped the notice of Muslims that she chose to supposedly manifest herself, in 1917, to three young girls in the city of Fatima, Portugal—a city indirectly named for Mohammed’s daughter. According to some Muslim accounts, Fatima (the girl, not the city) occupies a position of honor in heaven second only to Mary. The late Bishop Fulton J. Sheen made this observation:
Since nothing ever happens out of Heaven except with a finesse of all details, I believe that the Blessed Virgin chose to be known as “Our Lady of Fatima” as a pledge and a sign of hope to the Moslem people, and as an assurance that they, who show her so much respect, will one day accept her divine Son too.2

Thus far, however, mutual respect for Mary has yielded little in the way of building a meaningful relationship between the Vatican and the Muslim world. There have been reports of Muslims paying their respects at Marian festivals in North Africa, and of Muslims eager to visit the shrine in Fatima, but there has been nothing yet to signal a certain end to historic Christian-Muslim tensions.

The recent decision by U.N. forces to establish a no-fly zone over Libya has done little to quiet tensions, either. Military intervention by an international coalition will be seen by many in the Middle East and North Africa as a Western – Christian – attack on Islam. Not surprisingly, Gaddafi is already labeling the intervention as an attack by “crusaders,” and is calling on Islamic nations to come to his defense. “Long live Islam everywhere,” he stated recently, “all Islamic armies must take part in the battle, all free [people] must take part in the battle....” 3

It is doubtful that anybody will come, and it is likely that Gaddafi’s regime is finished. If it is, that would mean that three popular Middle East uprisings have succeeded in overthrowing their governments in a matter of weeks. And that might be all that happens.   It may not spread to other nations.

But what if it does? What would happen if popular unrest spread to some of the larger power centers of Islam? What if it happened in Iran? How would that change the playing field? What propheticdevelopments might ensue?
Honestly, I have no idea. Maybe nothing. The current situation may simply fall under the heading of “wars and rumors of wars.” We may even discover when it’s over, that Jesus returned without the Muslim world ever coming into any particular alignment with Western Christianity.4

It’s important to remember that, as fascinating as it is to watch world events unfold, the purpose of Bible prophecy is not to give God’s people remarkable powers of prognostication. Prophecy is not a crystal ball that allows us to fill in minute details of the future on a timeline. Jesus once said, “Now I tell you before it comes, that when it does come to pass, you may believe that I am He.”5Our faith builds as we see God’s word come to pass.

When the Seventh-day Adventist movement was born, the vast majority of the predictions in Daniel and Revelation were already in the rearview mirror. We were (and still are) in the toes of the statue of Daniel 2. The 1260 days had already come to a close. We were standing on the far side of the sixth seal. Our confidence as a movement was built on prophecy that had already been fulfilled. Our future confidence will grow as we watch how the remaining events play out. God has provided enough of an outline to keep our senses sharp.

Prophecy is not about placing bets against the future; it’s about recognizing the future when it happens. Final events are important trail markers. When all visible evidence appears to be against us in the last moments, we will be able to return to the prophecies of the Bible and see that we have not been following, as Peter puts it, “cunningly devised fables.”6Only those who have been diligent students of the Scriptures and who have received the love of the truth will be shielded from the powerful delusion that takes the world captive. By the Bible testimony these will detect the deceiver in his disguise. To all the testing time will come. By the sifting of temptation the genuine Christian will be revealed. Are the people of God now so firmly established upon His word that they would not yield to the evidence of their senses? Would they, in such a crisis, cling to the Bible and the Bible only?7

Watching world events is fascinating. But as they steadily move in the direction God has shown us, it is not so that we can smugly cross them off a prophetic checklist, satisfied that we know something nobody else knows. God has laid out the future to keep our feet on the ground and our hearts safely riveted to Christ. He is, after all, the purpose and focal point of prophecy. Daniel and Revelation aren’t about knowing the future nearly as much as they are about knowing Jesus. And God has given us a clear mandate: to share with the world what we know of Him.

Nothing demands world attention quite like trouble in the Middle East. I know full well that I was not the only one glued to a TV set during the first Gulf War, starting to wonder if the events I was watching might not have broader implications. My questions eventually led me to a Seventh-day Adventist church, and I thank God every day that the church in my city was committed and caring enough to show the community what they believed. Naturally, they couldn’t give me specific prophetic details about the Middle East, but they were able to demonstrate – convincingly – that our planet is headed somewhere definite, and that God has given us plenty of reason for hope.
Since that time, I’ve seen tens of thousands people all over the world end up at the doors – and in the baptisteries – of Adventist churches. With confidence, I can tell you that right now, in your community, there are people whose hearts have been stirred by the Holy Spirit to ask important questions about the world around them. I’ve noticed that evangelistic audiences are growing, and that people are more sincere in their pursuit of truth.   They’re coming from every walk of life, every demographic imaginable.
We have a lot to share with them. We can’t tell them what will happen in Libya next week or next year, but we do know something about the real struggle being played out behind the scenes in every world event. We can paint an astonishingly beautiful picture of Jesus using a palette of colors that God provides in the remnant message – a picture that draws people irresistibly to the foot of the cross.
Take careful note of world events, and always keep your Bible open next to your news feed. Take heart as you watch things unfold. But take even more careful note of the awakening hearts around you, and be ready to give “a reason for the hope that is in you, with meekness and fear.”8

You might just be surprised to discover how many of them there really are.

1 http://af.reuters.com/article/worldNews/idAFTRE72L1Q220110322
2 You can find his thoughts posted in greater detail at http://catholicexchange.com/2010/11/01/92999/
3 Evangelicals Fear Libya May Become ‘Another Iraq.’ Christianity Today, March 23, 2011.
4 The first half of Revelation 13 took place primarily in the West. Is it possible that the remainder of that chapter will also be Western? Personally, I doubt it. Many thoughtful observers believe that Rome is seeking a dominant role across the planet.
5 John 13:19