y the time the worship service began the large third-story room was filled to capacity. The first portion of the service was devoted to singing hymns and psalms, interspersed with testimonies and much prayer. Finally Paul stood up to speak to the assembled believers. In his heart he knew this would be the last time this side of heaven that he’d see this group in person, and there was still so much he wanted to impart to them.

Clearing his throat he began where he always did, sharing his personal testimony of what Christ had done and was doing in his life. As he began to speak, a young man who’d been standing in the back throughout the worship service surveyed the room. He’d been standing for some time and was eager to find a place to sit. His eyes fell on one of the windows that overlooked the street below. Making his way to the window, he sat on the sill and leaned against the side of the window frame. As he did, a smile covered his face and he let out a sigh; it felt good to be off his feet. Now he could sit back, relax, and enjoy Paul’s sermon.
Because he knew this was his last chance to talk in person to the believers in Troas, Paul found it hard to stop talking. In fact, we’re told that he “kept on talking until midnight” (Acts 20:7).
As midnight came and went, Paul kept going. In fact, he was just warming up. It was a little after midnight when Eutychus, sitting on the windowsill, felt his eyelids getting heavy. For a while he fought a valiant battle to keep himself awake, but finally he succumbed. 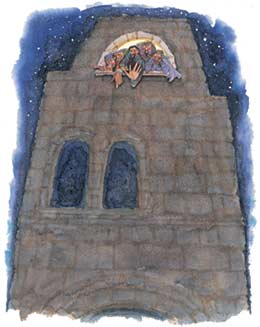