A God for All Seasons

top the four-drawer file beside my writing table stand two 3 x 5 photos of my mother and father during their teen years. Looking down at me from their individual frames, each seems to be expressing both interest and encouragement. Now that I am engaged in disseminating the remnants of their earthly possessions, I am keenly mindful of their silent witness to my stewardship.

We humans are like that, aren’t we? The hallways and dens of almost every home I visit today are adorned with multiple photos of the occupants’ parents. And someday their own children will doubtless display pictures of them in their future dwellings.
We have this thing about our ancestors—as if at a certain age we somehow sense the silent wisdom they must have gleaned from their quest for survival. In learning more about their lives, we apparently hope to learn more about our own inner resources, especially how we might live beyond the setbacks we too often bring upon ourselves, and how we might find the strength to reenter the fray, though the whole world seems to be laughing at us.
Like Father, Like Sons and Daughters
Our heavenly Father has implanted a similar drive in each of us for discovering all we can about Him. The reformer John Calvin chose to begin his catechism with a review of humanity’s need to know God, because we believed it to be “the chief end of human life.” And because he believed true wisdom combined both God-knowledge and self-knowledge, Calvin held that we cannot satisfactorily comprehend either without knowledge of the other. But such insights must do more than flash through our consciousness without examination. God-knowledge takes root in the heart. “It is necessary . . . that the principal care and solicitude of our life be to seek God, to aspire to Him with all the affection of our heart, and to repose nowhere else but in Him alone.”1 Thomas à Kempis expressed a similar concern about the searcher’s lack of commitment: “A pious and humble search after truth is to be allowed, when it is always ready to be taught, and striving to walk after the wholesome opinions of the fathers.”2
Contemplating God
Both philosophers and theologians have been challenged in their attempts to circumscribe God. Logicians have characteristically equated God with first cause, natural law, and cosmic force. But Scripture makes it clear that God possesses a personality and has filled various roles in His interaction with humans: Creator, Sustainer, Law-giver, Judge, and Ruler. The existence of God is universally affirmed by His creative work, and further supported by human nature. Says Paul: “Even Gentiles, who do not have God’s written law, show that they know his law when they instinctively obey it, even without having heard it. They demonstrate that God’s law is written in their hearts, for their own conscience and thoughts either accuse them or tell them they are doing right” (Rom. 2:14, 15).*
The God of the Bible presents Himself foremost as a God of love, describing Himself as “the God of compassion and mercy.” “I am slow to anger,” God says, “and filled with unfailing love and faithfulness. . . . I forgive iniquity, rebellion, and sin. But I do not excuse the guilty” (Ex. 34:6, 7). This same merciful-yet-exacting God is also echoed in the New Testament: “Notice how God is both kind and severe. He is severe toward those who disobeyed, but kind to you if you continue to trust in his kindness” (Rom. 11:22).
The Father’s massive compassion continues to offer hope even when His face seems hidden. He is just, yet merciful; and angry, yet forgiving. The prophet Micah gives voice to his wonderment when he exclaims: “Where is another God like you?” (Micah 7:18). “This is a God who, it appears, cannot stay mad,” adds Richard Elliott Friedman.3 Though portrayed in Scripture as the most hidden of deities, He is also the most intimate. While His divinity seems to require us to be held at arms length, this separation grieves Him to the heart.
Our view of our Father would never be complete, however, until we see Him revealed in the person of Jesus. “No one has ever seen God. But the unique One, who is himself God, is near to the Father’s heart. He has revealed God to us” (John 1:18). Paul expresses this revelation even more clearly in Hebrews 1:3: “The Son radiates God’s own glory and expresses the very character of God, and he sustains everything by the mighty power of his command. When he had cleansed us from our sins, he sat down in the place of honor at the right hand of the majestic God in heaven.”
God Needs No Defense
Profound thinkers have often struggled to defend God’s behavior—or lack thereof. In Paradise Lost (1667), John Milton attempted to justify the ways of God to human beings, while in An Essay on Man (1734) Alexander Pope sought to vindicate God. Milton solemnly intoned: 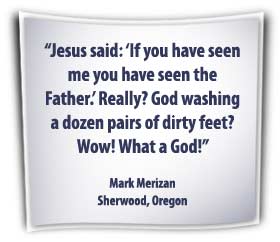 In their efforts to explain God, Pope and Milton took slightly different paths. Milton contended that humans may rectify their faults through faith and decency. On the other hand, Pope, with the cadence of heroic couplets, urged his readers to accept their fate, even going so far as to call their ignorance of the future a blessing! He wrote:

“O blindness to the future! kindly giv’n,
That each may fill the circle mark’d by heav’n:
Who sees with equal eye, as God of all,
A hero perish, or a sparrow fall,
Atoms or systems into ruin hurl’d,
And now a bubble burst, and now a world.”
David and God
When contemplating God’s attributes, it is only natural to think of “the sweet psalmist of Israel.” Although David would later commit grievous sins, God early identified him as “a man after his own heart” (1 Sam. 13:14). The principles taught in the schools of the prophets were those that molded David’s early character and life. Scripture truly became his textbook, and God his teacher: “Your commandments give me understanding,” he sang. “I am determined to keep your decrees to the very end” (Ps. 119:104, 112).
In examining David’s references to God in Psalms, I isolated four broad categories: caretaker, counselor, teacher, and master. More specific attributes included commanding, creating, deciding, defending, healing, judging, knowing, leading, protecting, revealing, shepherding. These divine attributes of our heavenly Father are also the ones to which we may justly aspire. Not surprisingly, such virtues are intrinsic to those esteemed by Paul: “love, joy, peace, patience, kindness, goodness, faithfulness, gentleness, and self-control” (Gal. 5:22, 23).
I confess to having had concerns about David, primarily because he played the fool among the Philistines, mimicked heathen kings in multiplying wives and concubines, and failed to discipline his children. Yet I cannot help being inspired by his constancy in pursuing God. We moderns would do well to exhibit such single-mindedness for even a fraction of the time.
Both God-knowledge and self-knowledge are important for us today. But by far the more important is God-knowledge. Nor should we ever again descend to the level of nineteenth-century England, where thousands of children endured extreme physical and mental jeopardy at the hands of greedy textile, mining, and industrial captains.
Philanthropist Robert Owen, a Welsh manufacturer, once interviewed a 12-year-old breaker boy, black from head to toe with coal dust, and weary from unbroken hours spent chipping shale from broken coal. “Do you know God?” Owen asked.
After pondering a moment the lad replied, “No, sir. He must work in some other mine.”