Step Out of Your Box

n his book God Works the Night Shift Ron Mehl writes: “If you don’t feel your current assignment is really that difficult, then you simply don’t understand your assignments. If what you’re doing today doesn’t require the help of God, then you’re probably out of the will of God. Because what He assigns you will be bigger than you are.”
Late in my 30s I found a vocation in life perfectly suited to the odd components that make up the being that is me. Three to four months, sometimes longer, depending on
the season, I step out of the box that is my ordinary life. I exchange the mundane for the extraordinary. I am a wildlands firefighter.
It’s the very seasonal aspect of firefighting that allows me to leave behind the mundane: washing dirty dishes, vacuuming pet hair, confronting piles of soiled clothing, the ordinary schedule that is mine and that of many others the rest of the year. And yet it’s those same mundane chores that seem inviting once again at the end of a very physically challenging fire season.
It’s All in My Mind 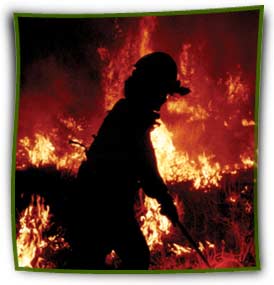 The physical challenge in taming a fire almost goes without saying, but it’s especially challenging for a small-boned female. I have to be at the peak of my game in order to be up to the tasks a firefighter faces: grueling hours of backbreaking work in the hottest part of the day, using muscles that were exhausted five or six hours earlier, using them well into 20- or 30-hour shifts, stretching oneself beyond what normally was thought possible. That challenge to the body then becomes one of the mind.
Can I keep swinging this Pulaski (a tool similar to an ax with a scraping tool on one end), and at this pace? Will my legs take me over the top of this slope? My hard hat seems too heavy for my head to hold up any longer. I’ve slugged down the last of my canteen water, and I’m still parched.
Starkly, my world is uncluttered on the fire line. There is but one goal. Put the fire out! Prioritizing life boils down to my body’s most basic needs: Food, water, and sleep as I battle the elements of earth, wind, and fire. The comfort of a shower to wash off the black soot becomes less important than a cold drink of water or an hour to nap.
When my body and mind are strained to the limit of my reserves, it is revealed to my innermost self that strength outside of my being is immediately required. It becomes abundantly clear that this situation is bigger than I. As my pleadings are uttered to God—“Get me through this shift,” or “Swing this Pulaski for me, Lord”—He reveals Himself. God assures me at those times that He is there and has been all along. This gives me renewed strength.
Beauty and the Beast
One of the ways God reveals Himself is in my surroundings. The fire itself, with its awesome heat, gases, and destructibility, displays a power that, to my understanding, could only originate with the Maker Himself. To see a fire whirl being born of the flames directly in front of me is to witness glory contrasting with a ruinous energy ready to race off in a frenzied path of randomness. Watching a flame front two miles wide speeding off to eat anything within the next eight miles within minutes is to watch the partnership of wind and fire, basic God-given elements with the ability for good or evil.
Away from the distractions of city life with all its noise and clamor, God gives us a window into the quieter, less schedule-oriented life of the lower creatures. My seasonal job gives me the privilege of opening that window.
I’ve put out lightning strikes that have reached the door of a home of owls we found in an upturned stump. My heart has tugged at the sight of the tiniest field mouse scurrying out of her habitat on fire, only to race back in again after her young; seeing the largest of moose crash out of the brush to safety with what seemed like a look of astonishment on his face. They have no problems prioritizing: Danger, food, water, sleep.

Never is fire more glorious than at night with its red, orange, and yellow flames, combined with bluish gases visible against a black backdrop. The most memorable evening of fire that stands by itself in my mind is of a July night on the top of Garfield Peak on the Cheyenne Indian Reservation in southern Montana.

My crew had just finished digging in a hand line to keep the fire contained in a rugged bowl and not overrun the ridge. We had patrolled the line making sure no fire had crossed our line. After many hours of swinging our tools it was now dark as we finally collapsed in a heap of yellow shirts to rest. Most of my crew fell fast asleep on the ridge above the bowl, but I looked out across to the southern ridge. In characteristic single-file the Indian firefighters’ headlamps shone like orderly fireflies stretched along the top of the bowl as they dug more line. The full moon above them showed bright pink from the smoke. Off to the northeast the lights on the tall towers of the power plant at Colstrip, Montana, were visible. But it was not the man-made that struck me with awe but the dancing of the northern lights across the sky on that side of the fiery bowl. That night of light—the Indian fireflies, the pink moon, the orange fire with the green and blue of the northern lights dancing over the entire scene—is indelibly printed in my memory. Had I not stepped out of my conventional box, I’m sure I would have missed out on the view God gave me that night, and the many others given me in my seven years of fighting fire.
I’m not necessarily advocating that all women step out of their conventional roles as far as I did. Many find daily challenges in more traditional careers. But I write to those yet unchallenged, whose lives have stagnated and who no longer see God working.
Have you not seen God working lately? Step out of your box. God is big enough to handle it. Don’t underestimate Him. He’s too big to fit into a box of any kind!
_____________________________
Kim Schutz is a wildlands firefighter, budding author, and grandmother, who lives in Billings, Montana.
Advertisement
Advertisement