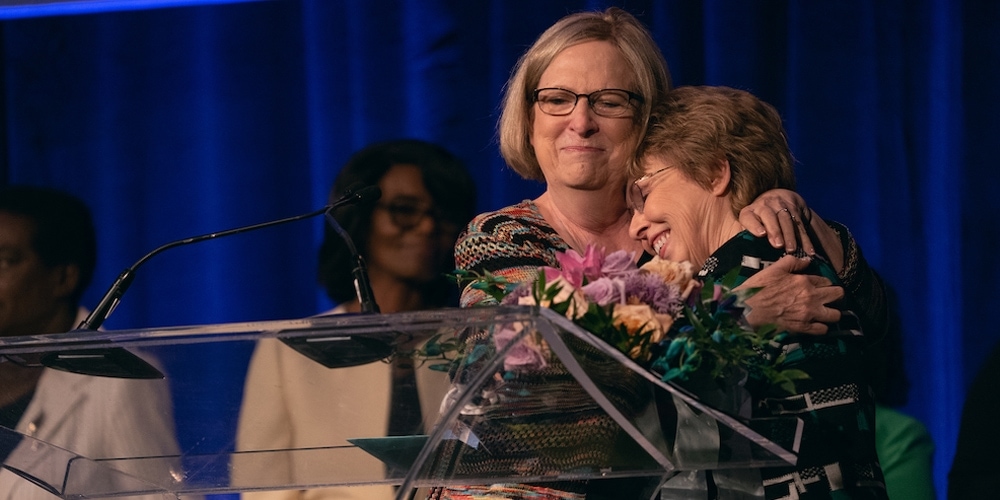 More than 1,000 women were given the opportunity to enrich their lives spiritually, mentally, and physically during the 2019 North American Division “Whole and Holy” Women’s Convention.

The four-day event, which included general sessions, breakout seminars, and worship services, was held at the Rosen Shingle Creek Convention Center in Orlando, Florida, United States, September 26-29. The convention also featured a full day of community service activities, organized by the “God in Shoes” ministry, that took place across the city of Orlando.

“We’ve known for several years that we wanted this convention to be about women’s health,” said Carla Baker, director of NAD Women’s Ministries, which hosts the convention every five years. “It gelled about a year ago when I read this wonderful text in the Message Bible paraphrase, 1 Thessalonians 5:23: ‘May the God who makes everything holy and whole, make you holy and whole, [and] put you together — spirit, soul, and body.’”

Daniel Jackson, president of the North American Division, who was a featured speaker during the 2014 convention, also greeted the attendees and encouraged them to continue ministering to others.

“The work of God on earth would never succeed without women,” Jackson said. “The work of the Seventh-day Adventist Church is the work of heralding the gospel of Jesus. You must never escape from that reality into a notion that you don't count because God is counting on you.”

A common theme highlighted by the general session speakers was the need for healthy interpersonal relationships. The speakers addressed the necessity through the lenses of their various disciplines and expertise.

Kiti Freier Randall, an internationally recognized pediatric neurodevelopment psychologist, spoke on the powerful effect relating has on the mind and body; Katia Garcia Reinert, associate director of health ministries for the General Conference of Seventh-day Adventists and a family nurse practitioner, spoke on the role emotional intelligence plays when relating to others; David DeRose, an internal and preventative medicine physician, presented on interpersonal relationships as one of the many ways to promote long-term health; and Adly Campos, an international evangelist and founder/president of Well-Being International, explained being mindful of the influence of others and how it’s important to be transformed by God.

Hyveth Williams, professor and director of homiletics at the Seventh-day Adventist Theological Seminary at Andrews University, delivered the Saturday (Sabbath) morning message, “Your Promise Is on the Way,” based on the biblical story of Abram and Sarai — who would become Abraham and Sarah — and how God promised Sarai would get pregnant with a son even though Sarai was barren and well beyond child-bearing years.

“Sometimes to make us mentally, physically, emotionally, and spiritually healthy, God will push us beyond our narrow perspectives by putting promises in our hearts that don’t make sense to our minds and seem impossible in our own bodies,” Williams said.

“A key to being whole and holy is to let the impossible seeds God plants in our mind take root in the depths of our soul and permeate the pathway of our heart to ultimately flourish and bear fruit. All we’ve got to do is believe, trust, obey, and be patient.”

A program specifically curated for high school girls was offered for the first time in the convention’s history. Erica Jones, assistant director of NAD Women’s Ministries, spear-headed the programming in response to the growth of Gorgeous2God, the ministry’s teenage outreach initiative.

“Gorgeous2God has grown so much that when we started planning, it was clear teen ministry needed to be a cohesive part of the convention. Teen ministry is one of the things we should be doing best,” Jones said. “Yes, it’s important for the girls to be part of the general session during worship and praise time and to also have that intergenerational experience, but they also need to hear topics that are relevant to them and where they’re living now.”

Approximately 20 girls participated in the teen track, which covered topics of dating, sex, identity, self-image, and experiences from their local churches. Three speakers led sessions: Novella Smith, a youth pastor who spoke on trauma and how the negative experiences they may have endured do not define them; Heather Thompson-Day, a professor, author, and speaker, who empowered the girls to persevere through difficult times; and Amie Regester, a digital media evangelist, who encouraged the participants to remember that Jesus will never hurt or abandon them, even when fellow church members cast judgment.

“One of the biggest things we see in our local church is the sad fact that a lot of girls feel judged based on what they’re wearing. They do want to be in church, but they want it to be an authentic experience [without judgement]. A lot of times, we fall short in that area, so this was a chance for them to engage and ask pertinent questions,” Jones said.

“I hope [teens] learned that their church, despite its flaws, really cares about them and loves them, and that they are mentors who are willing and want to journey alongside them,” she said.

Angeline David, NAD Health Ministries director, gave a presentation on an alarming trend that’s directly impacting physical health — obesity. David said the rate of obesity has nearly tripled worldwide since 1975. Statistics also indicate that 13 percent of adults are obese, and 39 percent are overweight. In addition, 340 million children and youth are either obese or overweight around the world.

David explained that the problem began in the Garden of Eden after Adam and Eve ate from the tree of life. When sin entered the world, it introduced brokenness to our physical stature and to spiritual communion with God, to the desire for a relationship with an equal, and to cognitive, creative, and leadership abilities.

“For some of us, that brokenness is manifested as hypertension, diabetes, or anxiety. It can also show up in relationships that are hurtful, harmful, and damaging, and in emotions that drive us into despair,” David said. “For some of us, it’s so much more obvious because we wear it. The bottom line is that we all have that same brokenness.”

“When it comes to factors causing obesity and overweight, it’s very complex, and there are severe and intimate situations involved in it,” David continued. “But the message of God for each one of us today is, ‘I have the power to make you whole, but I’ve given you some tips. Will you do your part so I can strength you?’”

NAD Health Ministries provided an opportunity to improve physical health by sponsoring the convention’s first 5K race. The race was also introduced as the inaugural event for the ministry’s “Made to Move” campaign that will unfold next year.

Once the 5K run concluded, David commented, “We all felt the Spirit of God. It was precious, beautiful, and sweet.”

Another important highlight of the convention came during the Saturday (Sabbath) afternoon program, which featured a violinist, saxophonist, and vocal groups. In between the musical performances, Jones and the women’s ministries leaders of the NAD’s unions, along with the women’s ministries directors of the Bermuda Conference and the Guam-Micronesia Mission, surprised Baker, who is preparing to retire next year, with a farewell appreciation ceremony. Each leader presented her with a gift, gave well-wishes, and thanked her for many years of service. Baker has been with NAD Women’s Ministries for 14 years.

“We’re all sisters. It’s not work when you’re working with such lovely people,” Baker said after her colleagues finished their remarks. “I’m going to miss all the friends I’ve made all across the NAD, Bermuda, and Guam-Micronesia. It’s been the best 14 years of my life. I thank God for giving me the privilege of serving North America with such a wonderful group of women.”