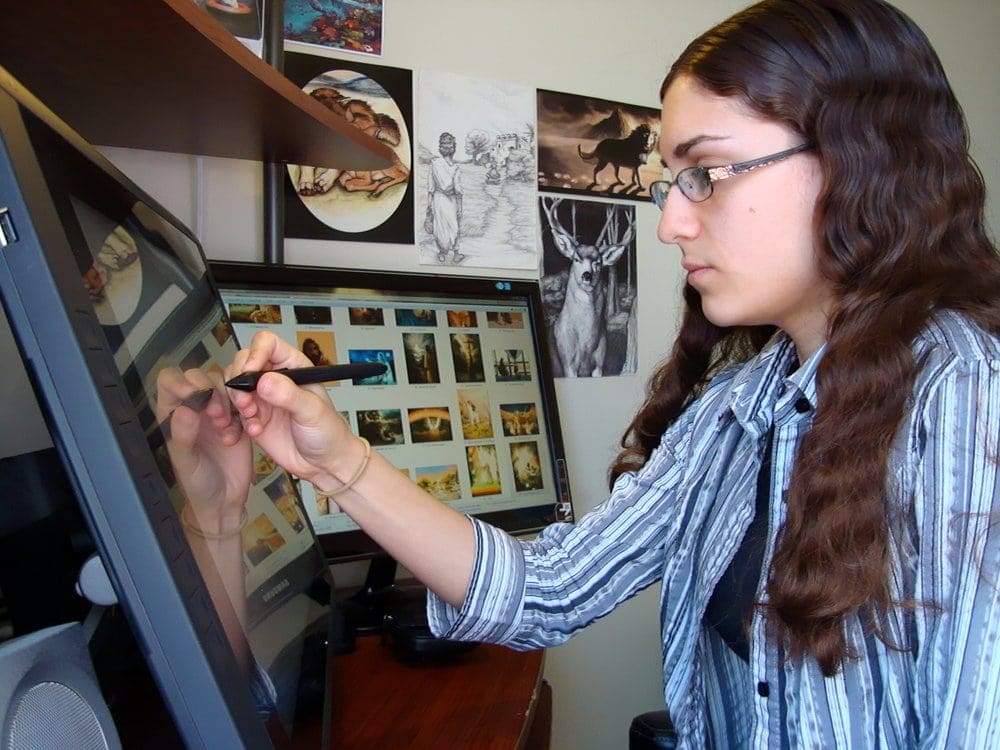 A conversation between a brother and sister about life on the New Earth has inspired one of the most ambitious series of paintings that an Adventist artist has ever produced of the story of redemption.

Sarahi Remolina, who held the pivotal conversation with her brother while in high school several years ago, has created 30 digital paintings tracing the redemption story from Lucifer’s fall to the New Earth as a student at Southern Adventist University.

Several paintings in “Eternal Redemption” remain unfinished after two years of work. But people flocked to view the paintings at Southern Adventist University’s gallery, which were on display from early December through last week, making them the most-viewed student art exhibit ever organized by the university.

“We had more visitors than ever for a student show,” said Giselle Sarli Hasel, Remolina’s mentor and the gallery coordinator.

“It was an incredible blessing to all who came,” said Hasel, an assistant professor at the university’s School of Visual Art and Design. “Many people said that knowing our students were so committed to Christ had warmed their hearts toward the art department. Others asked for Sarahi’s contact and have commissioned work from her already.”

Remolina said the story of redemption was the best possible theme for her senior thesis.

“From the fall of Lucifer to the restoration of the Earth, the whole theme of redemption is the most worthy story I have ever seen,” she said.

Remolina said the idea for the paintings was rooted in a conversation that she had with her brother about what they would do on the New Earth. She told her brother that she would set up a memorial to Jesus’ work of redemption, a series of painting that would line a wall in her home.

As a university student, Remolina decided that she didn’t want to wait until the New Earth.

“It makes more sense to do it now since now is the time that counts,” she said.

Remolina began to draw the paintings finding her inspiration in the Bible and three of books from Adventist Church co-founder Ellen G. White, The Desire of Ages, Patriarchs and Prophets, and The Great Controversy. The result is one of the most definitive collections of redemption-themed artwork since artists Harry Anderson and Russell Harlan illustrated the popular 10-volume Bible Story children’s books in the 1950s.

Remolina’s vibrant illustrations, however, are in a category of their own. Rather than using watercolors or oils, she turned to a Wacom drawing tablet and Photoshop to digitally create the paintings. Remolina, who graduated in December and plans to finish the paintings in the coming months, also intends to make a series of time-lapse YouTube videos of the process of each painting being created and to set the videos to music. She has made several similar videos and published them on her website.

Remolina learned to draw animals by watching nature films on the Animal Planet television channel as a small girl. Born in Caracas, Venezuela, she was raised in an Adventist home in the mountain city of Merida and moved with her family to the United States in 2000 after they won residency permits in the U.S. visa lottery program.

The 30 illustrations that comprise “Eternal Redemption” begin with “I Love You,” a view of starry heavens filled with luscious golden and dark-green hues, and end with “You Are My Witnesses,” which features two winged beings flying in starry heavens. The series also includes scenes from the Bible, a touching depiction of a modern-day man clinging to the cross of a dying Jesus, and a young woman reading her Bible as a video game joystick pokes from a nearby trash can.

Remolina said the joystick represented her own struggle to put God first. While in high school, she longed to know God personally and ultimately decided to abandon video games and fictitious stories, both of which had occupied much of her time and dominated her artwork.

“I want young people to see that the history of the Bible is more exciting and infinitely more worthy than movies, video games, and all the entertainment that the media can provide,” she said. “God has amazing things prepared for us. He alone is worth more than anything else. I want everyone who sees the paintings to consider God, His interests, and think about joining His side.”