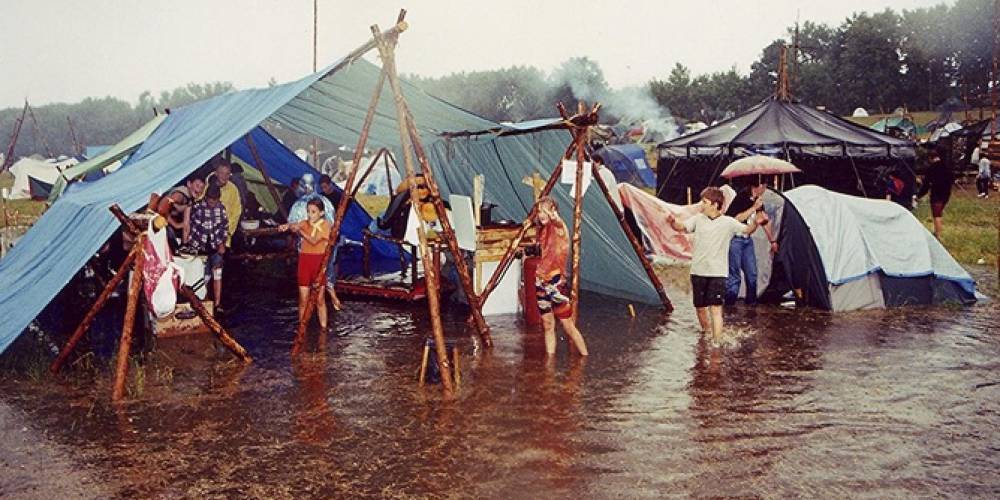 Rain risked ruining the biggest day of the year for Latvia’s Pathfinders.

Fifteen minutes remained until the annual Pathfinder camporee was to open with a pomp-filled ceremony last July. But a downpour was drenching the campground as Pathfinders huddled in tents with non-Adventist friends, younger children from the Adventurers club, and adult leaders.

It looked likely that rain would spoil the weeklong camporee of 750 people for the first time in the camp’s 19 years in Latvia.

“So we started to pray, ‘You created rain, and You can stop it,’” said Guna Rimane, the Seventh-day Adventist Church’s Pathfinder director for Latvia.

She and other Pathfinder leaders prayed in the camporee office that the rain would stop before the 3 p.m. opening ceremony. The children were worried. Many were anxiously asking what would happen next.

Rimane’s walkie-talkie squawked. It was a Pathfinder leader from the other side of the campground. He said he was praying with his team of marching Pathfinder drummers who were supposed to kick off the opening ceremony.

But the rain fell harder.

The leader of the drummers announced via walkie-talkie: “We’re going to start. Guna, please pray for us.”

All the children listened as Rimane prayed over the loudspeaker. Then the drummers marched out into the rain and toward the marked-off center of the camp where the ceremony would be held. Just as they stepped into the center area, the rain abruptly stopped.

“It was two minutes before the opening ceremony,” Rimane said. “And it never rained again during the camporee.”

The astonished children — and their parents — could talk of nothing else.

“For the kids, it was something else,” Rimane said. “We had parents who were present and were saying, ‘What is going on? God is so real.’”

No one knows how many hearts were touched that rainy day. But church leaders said the story illustrates how God is using Pathfinders as a powerful witnessing tool in Latvia, a small Baltic country of 2 million people and only 4,000 Adventists.

“The Pathfinders are very good missionaries,” said Vilnis Latgalis, president of the Adventist Church in Latvia. “They have a lot of passion.”

The first Pathfinder club was organized in Latvia shortly after Rimane returned from her first camporee in summer 1994. She was deeply impressed by the event, which was hosted by the church’s Trans-European Division, whose territory includes the Baltics, and wanted to bring it to her homeland.

Today, Latvia’s Pathfinders learn survival skills like their counterparts worldwide but also engage in community outreach activities. They distribute ADRA-provided gifts to children from low-income families at concerts. They bake gingerbread cookies for neighborhood children. They invite non-Adventist friends to become Pathfinders and to join them at the summer camporee, their most-anticipated event of the year.

“The camporee really unifies our club. It makes us like one,” said Maija Paulina, 22, a leader of the Pathfinder club at Seventh-day Adventist Church No. 7 in Latvia’s capital, Riga. “Some children come and some don’t during the school year. But they all come to the camporee, and you get to know each other so well. You can really see how God is leading because there are many answered prayers at camp.”

Paulina told of how her club began praying when only seven Pathfinders showed up at the start of the 2015-16 school year. Then three neighborhood children, including a friend of one of the Pathfinders, started attending. By camporee time, 30 people signed up to attend.

The club saw a second prayer answered at the camporee. Every day, club leaders prayed that the children would have a memorable experience, Paulina said. On the last evening of the camporee, the club leaders invited the Pathfinders to share their impressions of the past week.

“Everyone really loved it, and we didn’t expect that, especially for the children who were not from the church,” Paulina said. “They asked questions about God. They were thinking about God. It was really amazing.”

Four Pathfinders from Paulina’s club spoke enthusiastically about their love for one another and God.

Krists Circens, 12, said he first went to a Pathfinders meeting at his mother’s suggestion two years ago but now is a member because he likes the other children and adult leaders.

“They are kind and they feel for other people,” he said. “If you have an accident or feel bad, they will always help you and understand you.”

Anna Reznikovs, a kind-faced girl with long, blond hair, said she liked learning from the club’s young adult leaders. Her older brother, Konrads, 12, said he had enjoyed practicing survival skills at the camporee this summer. A non-Adventist friend joined the club at Konrads’ invitation this past year, Paulina said.

Some Pathfinder clubs are packed with non-Adventist children, Rimane said.

“Here the Pathfinders invite their friends and neighbors to join,” she said. “If you are excited about something, you want others to join. We get many, many Pathfinders this way.”

Latvia currently has about 300 Pathfinders and 150 Adventurers, she said. About 400 children attended last summer’s camporee of 750 people in Salacgrīva, located about 60 miles (100 kilometers) north of Riga.

Lives have been changed through the Pathfinders. Rimane told of a father who tried to stop his daughter, Krista, from attending her local Pathfinder club. He complained that the club was changing her behavior. Pathfinder leaders began praying for Krista and her parents. When the camporee arrived two years ago, the father reluctantly allowed Krista to go if the mother drove her to and from Salacgrīva.

But troubles with the mother’s car forced the father to drive to the camp on a Sabbath afternoon. He saw uniformed Pathfinders bustling about Salacgrīva as they hosted a health expo and engaged in other activities as part of a community outreach program.

“When he saw what was going on, he changed his mind,” Rimane said. “Both parents ended up being baptized, and Krista was, too.”

This year, camporee organizers were surprised to receive a phone call from the mother of a 17-year-old boy, Eralds, who had attended the camporee several years earlier.

“We sometimes invite people who are not Pathfinders, but only a few,” Rimane said. “He was invited. Then we invited him to join the club afterward. He didn’t.”

The mother told Rimane that Eralds wanted to go to the camporee.

The Pathfinders club is meant for children aged 10 to 15.

The mother said she had traveled abroad to work for several months and had returned to find that he son was a completely different person.

“He says he wants to be with God,” she said. “He wants to leave his friends and find a new group of friends. He wants to go to the camp. He has good memories of what happened at the camp.”

Eralds attended the camporee last July and was baptized there. Five to 10 people are baptized at every camporee.

“We reviewed Eralds’ case,” Rimane said. “He had only attended a camporee once. But it left such an impression on him that when he reached this turning point in his life, he knew where to find friends and God.”