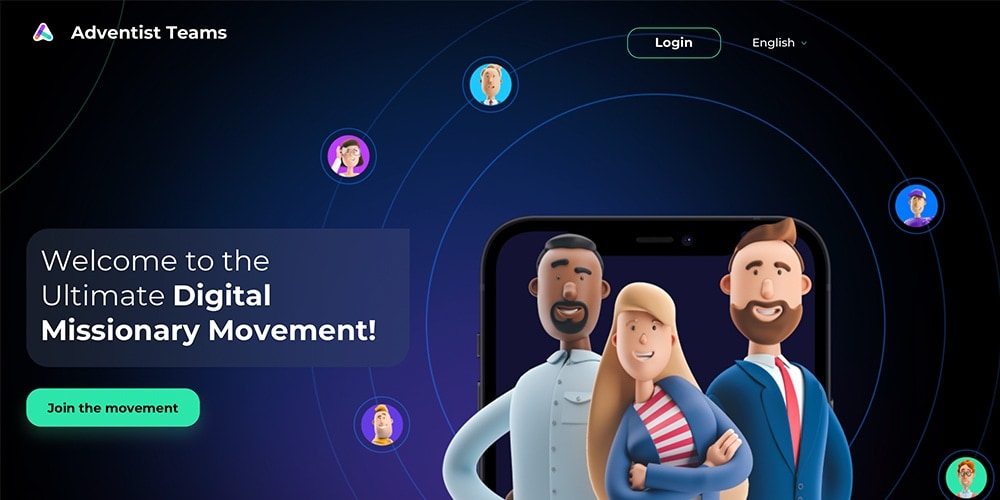 The app will allow members around the world to source and distribute high-quality and biblical content for friends and family in the digital space, church leaders behind the initiative said.

“We wish God’s blessing on Adventist Teams as this app reaches out, through church members, to those around you and, yes ... the world,” Wilson said. “Your personal involvement will be directed by the Lord and will be a great part of Total Member Involvement. Jesus is coming soon … stay close to Him, His Word, His righteousness, and help proclaim the three angels’ messages of Revelation 14 as you participate in Adventist Teams.”

Adventist Church communication associate director Sam Neves emphasized the central importance of equipping every Adventist with the capacity and tools for online involvement in the Great Commission and the proclamation of the three angels’ messages. “Our mission is to proclaim these three final warnings to the world. Even though our mass communication models are important, God called each of us to be the ones delivering the message,” Neves said. “After all, God could appear in the sky and announce the Second Coming in seconds. He doesn’t do that because we are the ones who can best communicate His love without causing fear.”

For Neves, this “why” behind the “how” is imperative. “Adventist Teams,” he said, “is the most fun way of fulfilling this mission with a team of like-minded people who cannot wait for Jesus to come back.”

“The success of digital evangelism efforts depends on how engaged and involved church members become,” she said.

After a successful digital evangelism campaign in 2020 run by Adventist World Radio with the support of the General Conference Communication Department, it became evident church members needed a set of tools to equip and enable them to work collaboratively in digital mission activities. Since then, the department has been developing Adventist Teams. The app aims to impact the algorithms of all social platforms by having thousands of Adventists consume and share the best Adventist content.

The big questions include the topic of the (Saturday) Sabbath, Jesus’ second coming, and the mark of the beast — all very popular topics given the climate of the world.

“We wanted to find a way to continue to engage [members] and help them find great content they could share with their friends,” Truman said.

The app isn’t just “another resource” for church ministry but rather is a tool for each of God’s people connecting in the digital space, Truman explained. “God has asked each member to proclaim the three angels’ messages to the world. For those that want to answer this call, especially in the digital world, Adventist Teams is a tool they need,” she said.

How Does the Adventist Teams App Work?

Anyone can use the app — they don’t have to be a digital wiz or a Facebook, Twitter, or Instagram user (to name a few of the many social media platforms available). Once a new user has been invited and signed up, they can begin browsing the different resources available from the local church level to the Adventist Church and associated organizations such as Hope Channel, Adventist Media, and the Adventist Development and Relief Agency, for content that is relevant and helpful to the intended audience.

Truman went on to say, “Whether [members] are looking for resources on doctrinal beliefs or health or family, we are always trying to find new, fantastic resources that they can share.” Those working behind the scenes are continually looking for content that is doctrinally sound and supports a cross-section of queries and questions from the public on how to live a better life here on earth now and to prepare for eternity.

Apart from providing existing resources to share, the app will allow users to share their own created content, content that Truman said is intended to be “evangelistic in nature, with members worldwide, who in turn can share it with others.” In essence, the Adventist Teams app is a one-stop shop for trustworthy and relevant content for a world in need of Jesus and a deeper knowledge of God’s Word, and His heart, she explained.

Truman emphasized that “it is of the utmost importance to help raise up more leaders in the church, people who inspire and motivate others to share their faith.” She shared that this app has multiple purposes: to create, to source, to share, and to inspire and empower. She added, “Adventist Teams is invite-only, so that people are encouraged to invite others to join and take a personal interest in helping and encouraging them to proclaim the good news to the world.”

According to Truman, there are different levels of leadership within the app. These levels come with extra perks, incentives, and corresponding responsibilities. They can be achieved by an individual digital missionary or through the work of a team. “You can’t be a leader if you aren’t inspiring and supporting others,” Truman said, “nor can you be a leader if you aren’t leading by example.”

Inspiring a Generation of Digital Missionaries

For Truman and Neves, it is a deeply personal project, but they believe that it is a passion shared by millions of Adventists around the world. “As a lay church member, one of my struggles in sharing my faith was finding resources on specific topics that I could share when I saw people asking questions,” Truman said.

“There’s a knowledge that right now, in this world, in this social climate, we are called to minister in the online space,” she added. “This ministry may look like sharing existing content and engaging with the circle of friends and family online that God has placed us into special contact with, or it could be to steward creative talents and create for the great commission.

“We have so many incredibly talented people sitting on our pews wanting to use their talents,” she continued. “Now we will have a place for these creative people to share with the world church, thus allowing them to reach more people.”