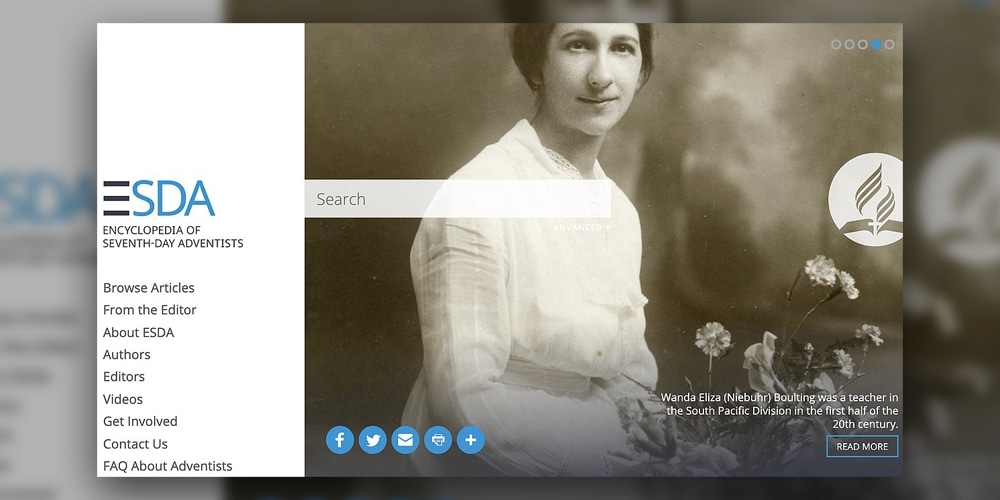 “Today is a historic day in the history of the church,” said Artur Stele, vice president of the Seventh-day Adventist Church. “Today we witness a moment Adventist scholars have been waiting to see for over 40 years. The significance of this new reality cannot be overstated.”

In the past, church historians and scholars have struggled to find accurate and up-to-date information about the Adventist Church. As of July 1, 2020, that situation has changed. Thanks to the new ESDA, researchers will have access to the most current data.

In 2014, General Conference administrators recognized that decades had passed since the printed Seventh-day Adventist Encyclopedia had been updated. Originally published in the 1960s, the book had been updated in the 1970s and again in the mid-90s. As a result, the Encyclopedia didn’t reflect the church's growth and development over the past 25 years.

“I believe the Bible has very specific historical information, which has been shown by archaeology to be accurate,” said Ted Wilson, president of the Adventist world church. “It gives us a picture of why history is so important.”

Quoting Adventist Church co-founder Ellen G. White, Wilson said that Seventh-day Adventists have nothing to fear for the future unless they forget how God has led in the past. “And so,” he continued, “it is very important we have accurate information about how God has led us as a church in the past. This is why the Encyclopedia is such an important resource.”

With the plan to update the Seventh-day Adventist Encyclopedia came two ideas: first, to create an entirely new reference work rather than simply add articles to the existing one; and second, to make the Encyclopedia an online resource, ensuring that future updates and additions could be more easily made and it is more readily accessible to more people. Accessibility has remained an important consideration throughout the entirety of the project.

“For some people, the word ‘encyclopedia’ can be quite intimidating,” said Dragoslava Santrac, managing editor for the new Encyclopedia. “It sounds scholarly and advanced and full of dry information. With this version of ESDA, we had in mind the everyday person who wants to learn more about Adventists and Adventism—everyone from church members who want to explore more about their heritage to people who are not familiar with our church and want to learn about Adventists.”

ESDA includes biographies on influential people in the history of the Adventist Church and histories of church institutions such as conferences, schools, publishing houses, and hospitals. They are not written in dry textbook style, Santrac said, even though they are based on detailed research and have gone through a rigorous editorial process. Instead, most articles are written as inspiring and engaging stories.

“Through these biographical articles, we learn of the sacrifices, the commitment, the passion of the individuals who came before,” she said. “And reading through the stories of how various church entities came to be and what they've gone through is quite fascinating.”

Every article for the ESDA was written specifically for use in this new resource and is original content never before published. A list of sources is included for each article on the website for those interested in further research.

And what is a story “book” without pictures? The ESDA also contains (to date) more than 3,500 images of people and places significant to the history of the Adventist Church. Some are the traditional photos church members are used to seeing, of Ellen and James White, Uriah Smith, and perhaps a sanitarium here and there; but many are images most have never seen before.

“There are thousands of photos demonstrating the richness of our church and its history,” Santrac said. “This is what we tried to encapsulate with the Encyclopedia.”

After five years of work spanning the globe and involving dozens of people, including editors, writers, programmers, and designers, the ESDA is ready to go live. As of Wednesday, July 1, 2020, this extensive online resource is officially available to the public.

“I’m feeling both relief and elation at reaching this milestone,” said David Trim, director of the office of Archives, Statistics, and Research for the Adventist Church and overall editor of the ESDA project. “This has been a huge project, but despite many challenges, we have finally brought it to this point, and we’re ready to share it with the world.”

Among the challenges the team faced was the global lockdown due to COVID-19, which meant the planned in-person launch during the General Conference Session in Indianapolis was no longer possible. It also meant that several senior members of the editorial team around the world had to step away from the project due to personal or family illness. Additionally, other members of the global team were rendered unavailable at various times due to political issues in their regions.

Despite the setbacks, Trim said, the encyclopedia has “a critical mass of articles which will inspire” all who read them. This, after all, was the ultimate goal of the ESDA.

“We want church members to be inspired by the stories of how God has led and the incredible commitment and sacrifice of many men and women who built up this church around the world,” Trim said. “I hope and believe church members reading the articles will be inspired by the lives of personal devotion, and be moved to spiritual revival and renewal, recommitting themselves to the mission of the church and asking what they can do to make a difference and to share hope in Christ.”

ESDA isn’t only for Adventists, Trim pointed out. Both he and Santrac feel strongly that the Encyclopedia could be a powerful and insightful resource for those not yet familiar with the church. The idea is that anyone Googling “Adventists” will find the ESDA at the top of the list of hits and begin to explore the articles within it.

“They will find truthfulness and honesty, and they will find extraordinary men and women who were completely committed to God and the mission of the church,” Trim said. “Ultimately, my goal has always been that the ESDA would be both a work of great scholarly authority and a work that is faith building.”

In addition, he said, the Encyclopedia can be useful to various missions around the globe.

Bob Folkenberg, president of the Chinese Union Mission, said ESDA will help strengthen the faith of the people in his region, reminding them of how God has led His church in the past. Si Young Kim, president of the Northern Asia-Pacific Division, agreed.

“I believe this information will broaden the knowledge of pastors and fellow believers,” Kim said, “but will also help them know how they can serve God’s church.”

Rick McEdward, president of the Middle East and North Africa Union Mission, said that although the church has been operating in that region for more than 100 years, few people realize this is the case.

“By having this encyclopedia, when we meet with public officials, community leaders, we will have an easy reference point,” he said. “We can use it to show that we are here, we’ve been here, and we want to touch our community with God’s love.”

Alex Bryant, executive secretary for the North American Division, pointed out the importance of the ESDA to understanding a lesser-known part of the church’s history: the development of the church’s work among the African American community.

“This is a very important thing for Adventists to understand today,” Bryant said. “This encyclopedia will help share this important and vital part of our past.”

The editors are planning for an ultimate goal of about 7,000 articles for the Encyclopedia, and more than 2,100 entries are already available. Though many articles are already being written or are in the review process, many topics are still available for research and writing. The ESDA editorial team said they welcome interest from authors around the world, as well as contributions of historical artifacts such as diaries, letters, or photographs to be considered for inclusion in the ESDA. Inquiries may be made via the Encyclopedia site.

“When I take a few steps back and look at everything, it's just an amazing project,” Santrac acknowledged. “This is a historic project for the Adventist Church. It’s not anyone’s project — it’s the church’s project. And as the church, we should be proud of what we’ve accomplished here.”

The team hopes to complete the original ESDA plan by mid-2022; then the focus will be on updating and maintaining on a regular basis. Santrac admits she already has plans for the future of the ESDA.

“This resource has the potential to grow in so many ways,” she said. “I already have ideas I can’t yet share, but the ESDA truly has such huge potential to serve not only as an encyclopedia but also as part of study materials for students, and daily devotions. I’m thrilled about where we can go from here, and look forward to making it happen.”

Erton Köhler, president of the South American Division, summed up the resulting benefits of the Encyclopedia.

“This resource can be used not only for inspiring sermons and seminars for the church,” Köhler said, “but also in helping church members learn how pioneers overcame challenges and crises similar to those we face today. This will bring certainty and encouragement, and will help us to keep moving forward without fear, trusting in the miracles God performed in the past and those He will continue to multiply in the present and through eternity.”