Former Rebels Baptized in the Philippines after Listening to the Radio 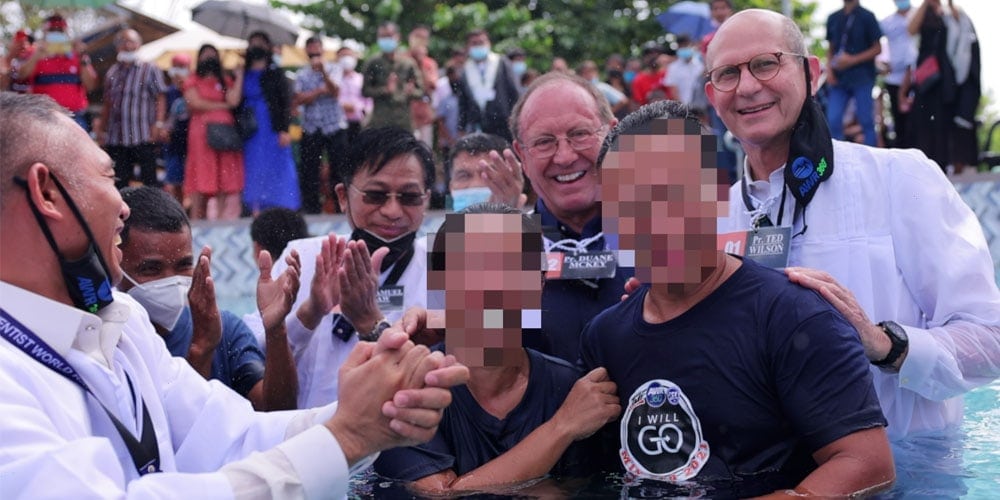 Then the rebels, holed up in the lush green mountains of Mindoro, began listening to Adventist World Radio (AWR).

A bloodstained chapter of Philippine history drew to a close on Saturday (Sabbath), November 13, 2021, when many former rebels, including their leader, laid down their weapons and gave their hearts to Jesus in baptism. In all, more than 2,000 people were baptized at the conclusion of island-wide evangelistic meetings.

“This is the amazing work of the Holy Spirit through Adventist World Radio,” General Conference president Ted N. C. Wilson said. Wilson baptized the former rebel leader and others at a mass baptism.

“We give God all the glory for turning the hearts of the former rebels to Him,” he said in an interview.

Preaching to an outdoor crowd of 2,500 people before the mass baptism, Wilson emphasized that everyone has been a rebel at some point in their lives.

“All of us were rebels at one time, not embracing God as closely as we should,” he said.

“Today, by God’s grace, you are no longer former rebels,” he said. “You are now new creatures in Jesus Christ. You are part of God’s great family that is looking forward to Jesus’ soon coming!”

Loud “amens” echoed across the vast muddy field that had been transformed into a meeting site. Heavy rain drenched the field shortly before Wilson stood to preach on a large stage flanked by two giant screens.

AWR president Duane McKey described the day as historic, and he warmly welcomed the former rebels into the Seventh-day Adventist Church.

“With that welcome comes a responsibility to fulfill the gospel commission in which Jesus said, ‘Go, preach, and baptize in all the world,’ ” he said, standing near Wilson on the stage.

McKey called attention to the blue shirts that the former rebels and other baptismal candidates were wearing. The shirts read, “I will go!”

“Your shirts say, ‘I will go!’ ” McKey said. “So that is the commission you are accepting from Jesus. ‘I will go!’ Today, leaving the past behind, we accept that commission, that charge, of Jesus to go to your friends and neighbors and tell them about Jesus, that He is coming soon.”

At McKey’s lead, the crowd roared after him, “I will go! I will go!”

A senior Philippine military leader expressed his gratitude to the Adventist Church for its role in bringing the rebels to peace. The Philippines has granted amnesty to the former rebels.

“Thank you to the Seventh-day Adventist Church,” General Jose Augusto Villareal, commander of the 203rd Infantry Brigade, which has operational jurisdiction over Mindoro Island, said from the stage in the muddy field.

The Philippines has been mired in conflict with rebels in Mindoro since 1969. A seemingly endless cycle of ambushes and counterattacks has killed 40,000 people even as the government unsuccessfully offered numerous incentives. The rebel leader was a man who goes by the alias Ka Martin for safety reasons.

But then, a number of rebels began to listen to AWR in 2019 and, as COVID-19 swept the world in 2020, they decided to surrender to Jesus, McKey said. Martin, a short man of about 40, could not understand what was happening to his fellow rebels and started to listen to AWR.

“He was hiding in the jungle, watching and trying to figure out why his fighters were leaving him,” McKey said in an interview. “So he started listening to the radio.”

AWR began broadcasting over local radio airwaves in Mindoro in 2017 as part of an Adventist Church initiative known as Total Member Involvement evangelism. Despite facing skepticism in some quarters about the ability of radio to reach hearts in the 21st century, AWR leased time on local radio stations for sermons and Bible studies ahead of evangelistic meetings that year. The broadcasts were a smashing success, with each daily program offering a question of the day to which listeners could call in answers and receive prizes such as religious literature. About 1,400 people were baptized after the June 2017 meetings, and the broadcasts have continued until today.

“We won’t stop the broadcasts,” McKey said. “The local churches are now running the broadcasts, and we provide the sermons. The laypeople make this happen. This is a perfect example of Total Member Involvement.”

Saw Samuel, president of the Southern Asia-Pacific Division, said God is not only working through Total Member Involvement but also “Total Mindoro Involvement.”

“We praise God for Total Mindoro Involvement,” he told a group of church leaders assessing the impact of Mindoro outreach on November 14.

AWR is working with the Philippine government and a nongovernmental organization, Adventist Laymen’s Services and Industries (ASi) member Farm Stew, to help the former rebels earn a livelihood through farming. The government has given plots of farmland to the former rebels, and Farm Stew will help teach them how to cultivate it and live healthily.

The former rebels organized a special program of appreciation for the Adventist Church on the evening of November 14. At the program, former rebels sang, prayed, and stood up one by one to share personal testimonies about how they fell in love with Jesus.

“It was really an incredible experience,” Kathy Proffitt, former U.S. ambassador to Malta and a board member of AWR, said. “They were incredibly sincere. The things that they said were from the heart. If anyone ever doubted that the conversions were real, they only had to hear these testimonies.”

Early Saturday (Sabbath) afternoon, dozens of Adventist pastors entered a large swimming pool in the muddy field to baptize 500 former rebels, including Martin and his wife, and about 200 other people.

That evening, the former rebels gathered around the pool for a worship service at which members of the AWR team encouraged them to be faithful. Robert Stotz, chief videographer for AWR, picked up a small rock and threw it into the pool. The former rebels watched as the rock hit the water and ripples spread across the pool. 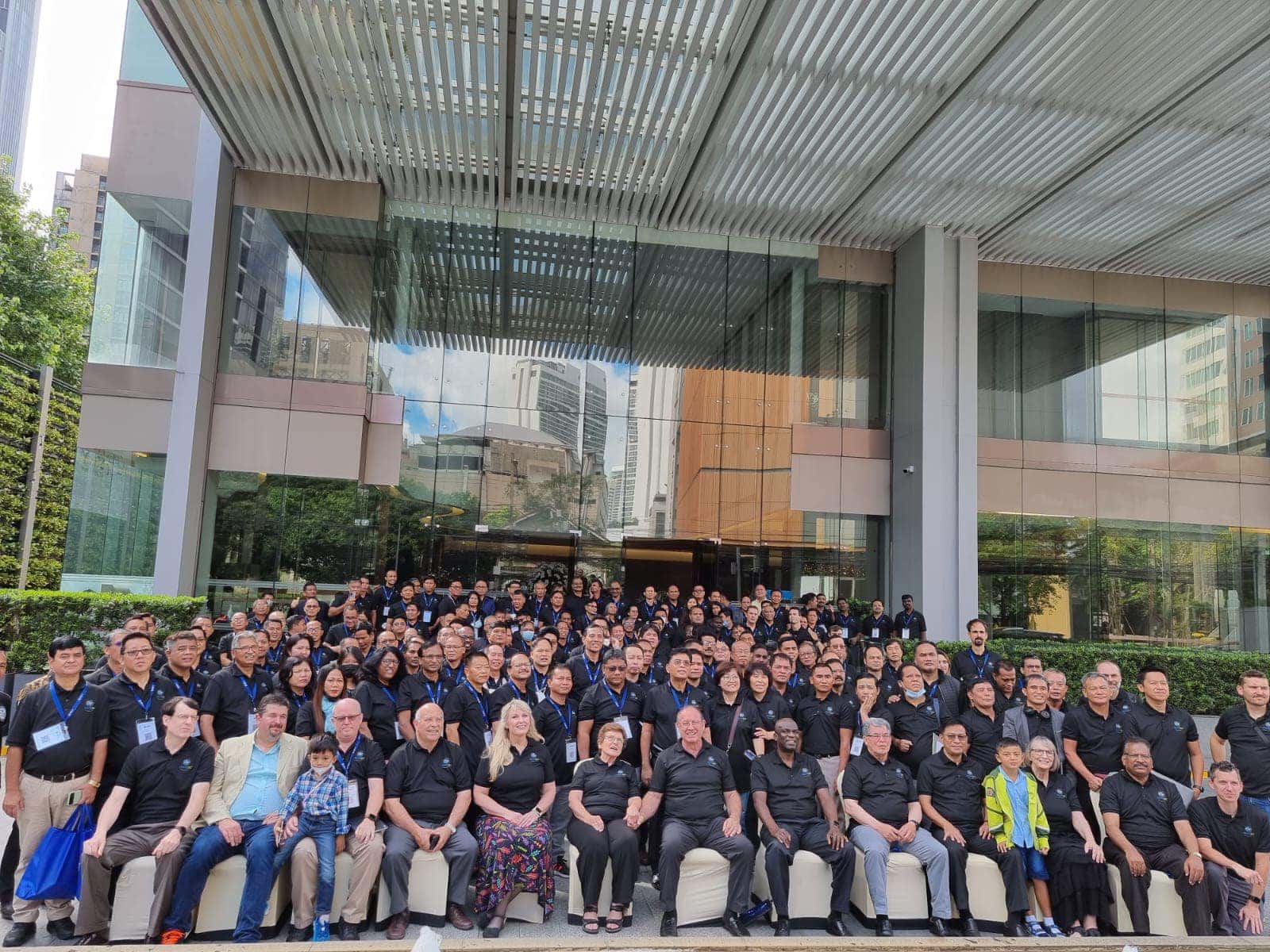