A Baptism Marks 150 Years Since the First Baptism in Switzerland 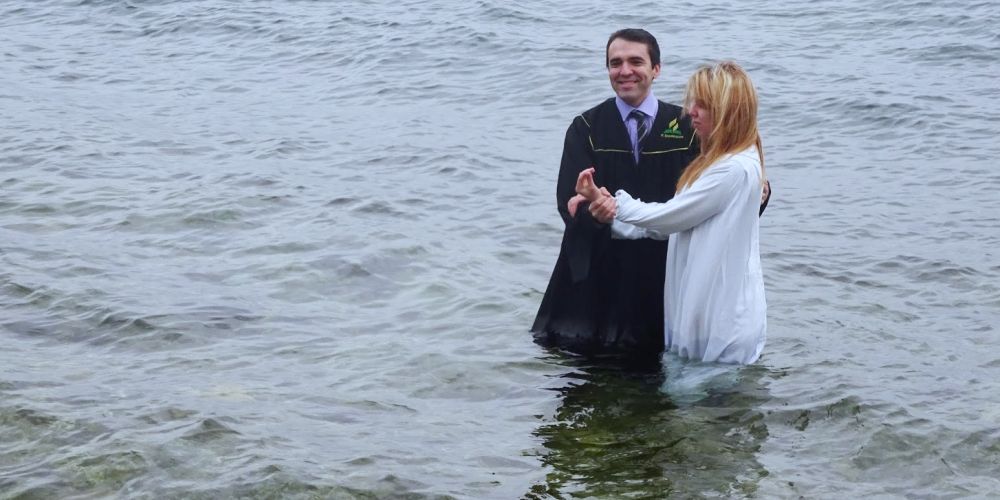 It was only a simple baptism.

But Seventh-day Adventists in attendance say heaven rejoiced with them as they celebrated the occasion and an accompanying milestone: the 150th anniversary of the first Adventist baptism in Switzerland and perhaps all of Europe.

Adventists from around Switzerland’s western Jura region gathered this month at Lake Neuchâtel for the baptism of Fatima Servin, a native of Paraguay, who has lived in the area for years.

The Feb. 7 baptism came exactly 150 years after the Adventist Church’s first Swiss baptisms took place in the same lake on the cold night of Feb. 7, 1866. Missionary pioneer Michael Czechowski, who brought the Adventist message to the region and other parts of Europe, baptized Jean Geymet and Louise Pigeront, the first fruits of his work in Fleurer village. The ceremony happened at night because the Adventists did not dare to baptize during the day because of fear of religious persecution.

“My mother asked to be baptized, which occurred on Feb. 7 in Lake Neuchâtel near Grandson,” she said. “It was at night, by the light of lanterns, because we couldn’t baptize during the day. Brother Jean Geymet also was baptized.”

Little is known about the first two believers. Geymet lived in the Vaud valley, while Pigeront was known for her intelligence and considerable influence in the region, the Swiss Adventist Church said.

The baptisms may have been the church’s first in Europe. Scholars are divided whether those baptisms were the first, or whether an earlier baptism took place in Italy. To prevent any confusion, the Swiss Adventists decided to mark Feb. 7, 2016, as the 150th anniversary of the first baptisms in Switzerland, said Andrey Ostrovsky, an assistant local pastor.

The anniversary commemorations began with retired pastor J. Frei relating the history of the church in the region during a special program at the Neuchâtel Adventist Church on Feb. 7, a Sabbath. After special music, a children’s story, and remarks by the local conference president, Fatima shared why she wanted to be baptized.

“She become interested in studying the Bible after the Caleb project,” Ostrovsky said, referring to a local initiative to reach residents of Swiss cities. “She has a relative who is an Adventist and invited her to participate.”

Fatima told the congregation that she had grown to love Jesus deeply as she studied the Bible and worshipped with Adventist believers.

“She said she had searched for Him for many years and now had finally found peace, hope, joy — Him,” Ostrovsky said.

After she spoke, church members prayed in small groups and departed to the lake for the afternoon baptism. Later they returned to the church for a celebratory meal.

Guillermo E. Biaggi, a general vice president of the Adventist world church, said the baptism serves as a reminder that God’s Spirit is still at work in Europe, an increasingly secularized continent where the church has struggled to make inroads.

Biaggi urged Adventists everywhere to share Jesus, especially in the cities, and noted that church cofounder Ellen G. White cautioned already a century ago that time was running out for the cities. He pointed to a passage in White’s book Evangelism, page 33.

The passage reads: “My brethren, enter the cities while you can. In the cities that have been already entered there are many who have never heard the message of truth. Some who have heard have been converted, and some have died in the faith. There are many others who, if they were given an opportunity, might hear and accept the message of salvation. … These, our last efforts for the work of God in the earth, must bear decidedly the impress of the divine.”

It’s a message that the Swiss Adventists no doubt have made their own.