What’s in It for Me?

The answer to this question packs a life-changing surprise. 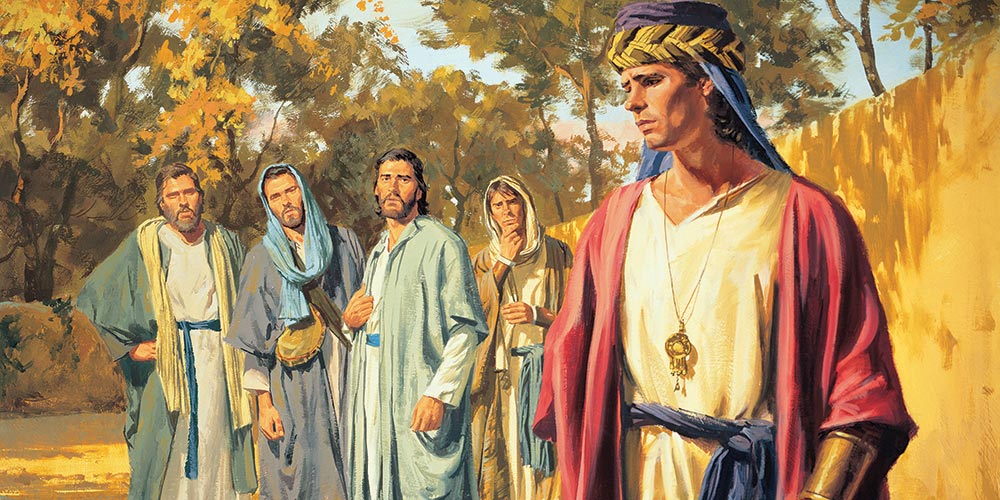 One day an earnest youth overflowing with earthly possessions, hubris, self-confidence, and curiosity engaged Jesus in dialogue about eternal things and places, expecting unmodified confirmation that he was kingdom-ready. Stunned by Jesus’ disqualifying response, he departed disheartened (Matt. 19:22).

Then Peter, spokesperson for his team, made his own compelling pronouncement: “We have left everything to follow you” (verse 27). His motivation? The firm conviction that by their deeds he and his colleagues had surpassed Jesus’ enunciated qualification for kingdom entry. Of the many insights that Jesus’ response provides, this article considers three: God’s purpose for His ambassadors, the disciples’ expectations of reward, and the truth about service and surrender that embraces us all.

A diplomat is a state appointee whose skill and tact serve their country through their intentional association with other states or international organizations. They conduct the foreign policy of, and represent the political and economic interests of, their country, while interacting with governments, private business, and civil society in its varied articulations, to create links through common ideals and united actions. The gospel commission is definitively a diplomatic assignment: “Go into all the world and preach the gospel to all creation” (Mark 16:15). Every follower of Christ is His ambassador, a diplomat of His kingdom to all the nations of this world.

God emphatically outlined his ambassadorial honor and duties to Jeremiah: “Before I formed you in the womb I knew you, before you were born I set you apart; I appointed you as a prophet to the nations” (Jer. 1:5).

And hundreds of years prior to Jeremiah’s conception, He explained the basis of their ambassadorial selection to Abraham’s descendants through Isaac: “The Lord did not set His affection on you and choose you because you were more numerous than other peoples, for you were the fewest of all peoples. But it was because the Lord loved you” (Deut. 7:7, 8).

The God who is love explains to His appointees that the basis of their appointment is Himself, His own nature. Nothing outside of Him, no virtue inherent in the objects of His affection, persuades Him to act. He acts according to His nature of love, to commission His chosen to represent their celestial country in communicating to all those with whom they interrelate, His character and principles of unselfish love.

Naive or uninformed, Jeremiah thought it appropriate or helpful, perhaps, to raise objections to his selection (Jer. 1:6), as had Moses at Midian several centuries earlier: “I do not know how to speak,” Jeremiah argued (Jer. 1:6). He had not learned from his people’s history: “I have never been eloquent” was Moses’ manner of raising the same objection (Ex. 4:10). To Moses, the Lord directed pointed rhetorical questions: “Who gave human beings their mouths? Who makes them deaf or mute? Who gives them sight or makes them blind? Is it not I, the Lord?” (verse 11).

Admittedly, unlike Jeremiah and Moses, Peter would not at any point have been found bashful or slow of speech. Perhaps it would be this distinction on his part that facilitated his daring where others before him had been apologetic. Yet his courage and their fear are both at fault for implying that God needed to be reminded of something—whether of human inadequacy (You’ve forgotten who we are) or divine obligation (Don’t forget: You owe us something). Their common flaw does remind us all that divine diplomats are not immune to weaknesses, so that our own do not disqualify us from serving as representatives of His mercy and grace (Rom. 8:29, 30).

Commenting on Matthew’s Gospel, Leon Morris asks, “If it is true that a person can gain salvation and enter the kingdom only by God’s power, then could the disciples be completely sure that they were saved?”1 The celebrated assertiveness of Peter’s challenge may also conceal a note of uncertainty: they had indeed given up everything (Matt. 4:18-22), but had they really done all that was necessary?

Peter’s challenge both drew on résumé (“we have left everything to follow you”) and pulled rank: his first person plural “we” differentiated his group of insiders from others who shared no such closeness to Jesus. Whereas it is through His power that eternal life is obtained, Jesus should not lose sight of the fact that they had left everything to follow Him. They had not just spent some brief while before turning away, as had the rich youth, and perhaps other members of the community (see Luke 9:57-62).

Moreover, Peter’s concern, voiced for all, is quite distinct from the secretive effort of his ambitious best friends forever (BFFs), James and John, who sneakily attempted, with the aid of their mother, to secure highest places in the coming kingdom (Matt. 20:20-23). And Peter’s inquiry is also significantly broader than the rich youth’s challenge: he does not just ask about the end, for he and his fellow disciples were already giving Jesus all of now in full-time mission service. They were interested to know what they were in line for, having sacrificed much for Jesus’ sake.

Considering that someone had just chosen earthly possessions over Christ, Peter’s was a legitimate question. Unlike the rich youth who made the poor choice, he and his companions had demonstrated sacrificial obedience at Christ’s command to follow Him (Matt. 4:18-20). In practical terms Peter was calling Jesus’ attention to what they all, Jesus included, were engaged in doing: attending needs of the poor, liberating prisoners, restoring sight to the blind and release of the oppressed from captivity (Luke 4:16-20). They had also gone out in pairs to reap the spiritual harvest He indicated was awaiting them, healing the sick and preaching the imminence of God’s kingdom (Luke 10:1-12). They had returned home animated about demons being subject to them.

In spite of those positive outcomes, they still anticipated quantifiably more. Jesus’ comment about how difficult it is for the rich to enter heaven (Matt. 19:23) constituted a significant complication. He had mentioned no specific incentives at the time of their commissioning, except, perhaps, for catching men (Matt. 4:19). So Peter’s question would bring everything into proper and deserved focus.

As Ellen White wrote: “They had been taught to look upon the rich as the favorites of heaven; . . .if the rich were to fail of entering the kingdom, what hope could there be for the rest of men?”2 Their interest in money was no doubt as normal then as it is now. But Peter’s question “revealed a spirit that uncorrected would unfit the disciples to be messengers for Christ; for it was the spirit of a hireling.”3

The Truth About Service

To the disciples’ question “What will we get?” Jesus gave a straightforward response. Your reward is in heaven: “you who have followed me will also sit on twelve thrones” (verse 28). When God sent us into His vineyard, He already knew the endgame. But the disciples’ fixation on position and sequence had to die before they could ever appreciate His prize. For He does not think of us as peddlers. Neither should we think thus of ourselves. We are servants whom His grace has privileged with ambassadorship to all the peoples and nations of earth. He needs no coercion to reward us. He responds to Peter’s emphatic “we”with His own emphatic “you”: “you, you will sit enthroned” (verse 28, author’s rendering). But it would not be because we aspired to exaltation. Rather, because His magnetic love so controls our hearts and minds that we abandon convenience, family, and all material possessions to follow the one who abandoned everything for us.

All Jesus’ followers are His ambassadors and destined for eternal reward. The kingdom of eternal life is predestined for everyone who meets the conditions He has determined. We bear no badges of superiority, and our only glory is in His cross, by which the world is crucified to us and we to it (Gal. 6:14). We may leave all to follow Him. But we can never forget that only by His unmerited grace can we find entrance into His kingdom.

Balvin B. Braham is field secretary for the Inter-American Division of Seventh-day Adventists, and assistant to the president for evangelism and leadership development.