The End Is Near

The future is not all dark. 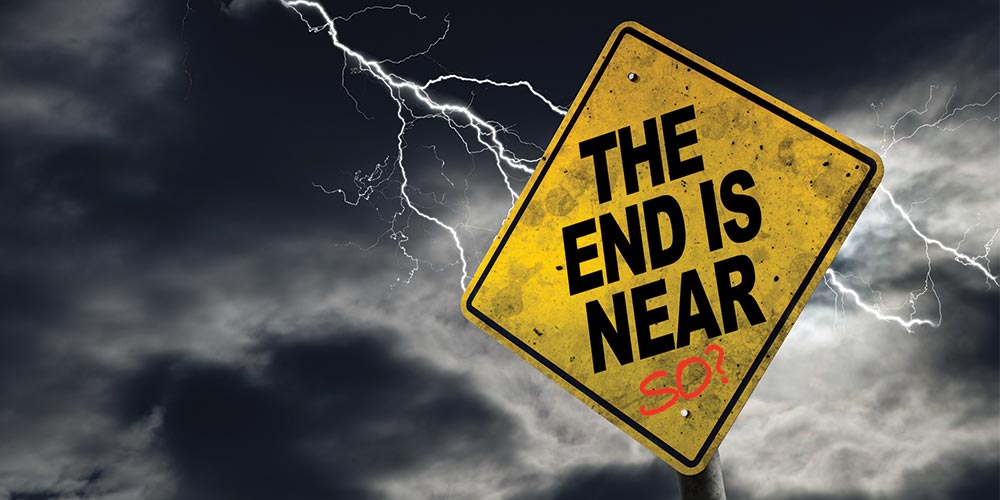 For 38 minutes in January, people in Hawaii were pushed to the edge of finality on the authority of five little words: “This is not a drill.”

It’s easy to see why. For months national leaders on both sides of the Pacific had traded taunts and insults. So surely nobody was surprised when the following words appeared on their smartphones and caused people to imagine the worst: “Ballistic missile threat inbound to Hawaii. Seek immediate shelter. This isa not a drill.” Their world was about to come to an end.

According to USA Today, roads were packed with cars (with people trying to go where?), and people crowded concrete structures. Some people hid in bathrooms or stairwells; one family hid in a steel shipping container. Others knelt in churches and began to pray; all natural and predictable responses.

There was also a desperate rush to contact family and friends with words of love and regret(?). One can only imagine what was on people’s minds as they spoke what they thought were their final words this side of eternity.

Fear as a Motivator

For Christians the concept of the end of the world is nothing new. For nearly 2,000 years we’ve lived with Jesus’ promise “Look, I am coming soon!” (Rev. 22:12), and known that we’re living on borrowed time. With each new natural disaster, massacre, genocide, and refugee crisis, Christian voices are there to proclaim: “The end is near.”

For a lot of people, like those in Hawaii, the primary emotion is one of fear. In January the Bulletin of the Atomic Scientists addressed a letter to “leaders and citizens of the world” that stated: “In 2017, world leaders failed to respond effectively to the looming threats of nuclear war and climate change, making the world security situation more dangerous than it was a year ago—and as dangerous as it has been since World War II.”* Accordingly, the Doomsday Clock, which predicts the end of the world, has been moved 30 seconds forward, and is now set at two minutes to midnight.

Understanding that the end is near shouldn’t lead to fear or resignation.

And lest Christians be tempted to feel smug about preying on people’s fears, Adventists may recall those leaflets and posters used to announce upcoming evangelistic series to our communities: the ones with lightening, mushroom clouds, hourglasses, fantastic beasts, and graphic illustrations of the number 666.

But fear motivate most whenthere is a threat. When the doctor says a scan reveals something suspicious, that’s when we’re most likely to embrace health reform. But when we receive the all clear, we too often fallback to eating carelessly and habits of inactivity.

Preparation as the Focus

“If the owner of the house had known at what time of night the thief was coming, he would have kept watch and not have let his house be broken into” (Matt. 24:43).

“Everyone who hears these words of mine and puts them into practice is like a wise man who built his house on the rock” (Matt. 7:24).

“Who then is the faithful and wise servant, whom the master has put in charge of the servants in his household to give them their food at the proper time? It will be good for that servant whose master finds him doing so when he returns” (Matt. 24:45, 46).

Along with these imperatives about preparation is the implication of surprise. And for the faithful it’s a surprise based on joy, the joy of being found doing our duty.

“The kingdom of heaven is like treasure hidden in a field. When a man found it, he hid it again, and then in his joy went and sold all he had and bought that field” (Matt. 13:44).

The man was simply doing his job. He had no expectation that this day would bring anything different from the weeks, months, and years that had come before. It was so far from any reality that he had to be discreet when selling his possessions lest anyone suspect anything out of the ordinary.

One can only imagine how this man’s life was changed as a result of finding that treasure. But it may not be that hard to imagine, especially when we think that after a lifetime of service, Jesus has another surprise in store: “Well done, good and faithful servant!” He will say. “You have been faithful with a few things; I will put you in charge of many things. Come and share your master’s happiness” (Matt. 25:21).

To which we will say, When did I do anything out of the ordinary? I was only doing my best to look after Your interests, just as I was supposed to do.

When we say the end is near, our focus shouldn’t be on the persecution and deception about to be set loose in the world. We should focus less on the tragedies and outrages perpetrated between humanity and humanity, and between humanity and nature, and focus more on how we can surprise others (and ourselves) by doing our duty as followers of Christ.

Of course, there’s always that tension between trying to make a difference and giving up in resignation. If the world is coming to an end and there’s nothing we can do to stop it, why even bother?

Why bother, for example, about poverty? Jesus already said, “You will always have the poor among you” (John 12:8).

He didn’t say we shouldn’t help them, however. Indeed, early Christians went out of their way to make sure to care for those who had less. “All the believers were together and had everything in common. They sold property and possessions to give to anyone who had need. Every day they continued to meet together in the temple courts. They broke bread in their homes and ate together with glad and sincere hearts, praising God and enjoying the favor of all the people. And the Lord added to their number daily those who were being saved” (Acts 2:44-47).

While today we have social programs for people in poverty, the safety net seems to be becoming smaller and weaker. If the end is near, those who are citizens of the better world to come will gladly and naturally do all we can to ease poverty rather than exacerbate it.

And if the day of God will truly “bring about the destruction of the heavens by fire, and the elements will melt with fervent heat” (2 Peter 3:12), why do anything about rising sea levels, shrinking polar ice caps, and more disastrous natural calamities (wildfires, hurricanes, floods). Shouldn’t we celebrate them as indications that the end is near?

As we realize the indescribable suffering experienced through today’s storms and calamities, and understand that it affects primarily those with the most to lose, loving others as we love ourselves means that even if we can’t undo climate change, we can at least be sensitive to the suffering it causes and try—individually and collectively—to have a smaller global footprint, to be better stewards of the planet with which we have been entrusted.

Understanding that the end is near shouldn’t lead to fear or resignation. Instead, we should be agents of hope. Given our understanding of Bible truth, Adventists are uniquely poised to bring messages of hope to our communities by both word and deed.

Let’s start with Creation. We can all trace our ancestry to one couple in the Garden of Eden. We’re all one human family.

Imagine this: an earthquake strikes a major metropolitan area. As soon as the dust clears, survivors flood the streets, looking for victims in need of help. Their first question is not “Are youChristian,” but rather “How can I help?” Disasters are color-blind and indiscriminate. And people who respond to them should have
only one thing in mind: rescue.

But after a few days, certainly after a few weeks, too many go back to their own enclave. The crisis is past; awkward reality is ready to return to us versus them, Christian versus Muslim, believers versus nonbelievers.

Let’s look at the Sabbath. In Isaiah God said the Sabbath is supposed to be “a delight” (Isa. 58:13). But by the time of Christ, the day had been encrusted in so many human restrictions and prohibitions. That’s why Jesus had to remind people: “The Sabbath was made for man, not man for the Sabbath” (Mark 2:27).

Imagine being commanded to relax, to put aside physical, emotional, and economic concerns and worries for 24 hours, to focus on our relationship with God and with others. Seen that way, the Sabbath becomes 24 hours of opportunities for fellowship and service, rather than 24 hours of restrictions. What could we do if we shared a message like that with our communities?

Planning for the Delay

Of course, the greatest reason to acknowledge that the end is near revolves around our Deliverer, Jesus Christ. Yes, the world is an ugly, violent, often dark place. But imagine what it would be without the influence of Jesus and His followers.

During the past 2,000 years Christians have been behind some of the greatest advances in science, education, medicine, art, service, and discovery. Jesus taught by word and example that Christianity is a life of joy and service. As the world grows darker, those who swear allegiance to the One who said, “I am the light of the world” (John 8:12) will remember that He also said about His followers, “You are the light of the world” (Matt. 5:14).

Light doesn’t try to shine; it just shines. It can’t keep from shining. Light, by its nature, shines. Jesus didn’t say, “Try to be light”; He said, “You are light.” In a world darkened by sin and fear, Christ’s followers reflect His light.

One of Jesus’ great stories centers on 10 wedding attendants (Matt. 25). During the past 2,000 years preachers have mostly chosen to focus on the attendants who ran out of oil before the bridegroom arrived. Those attendants have been excoriated for their foolishness and lack of preparation, and for being caught napping. Sleeping is, of course, not bad. The five wise attendants slept too. But they in the end,they were prepared for the bridegroom when he appeared.

When I was young, the idea of the time of the end filled me with dread. The way some people talked, when He returned Jesus would be more focused on leaving as many as possible than saving everyone possible. As I examined myself I was fairly certain I didn’t have anything to commend myself for His approval.

And I was right. Years later I learned the tremendous truth of Jesus’ statement “I am the vine; you are the branches. If you remain in me and I in you, you will bear much fruit; apart from me you can do nothing” (John 15:5). Our struggle is not to do good things to make Jesus love us. Jesus already loves us. All we have to do is stay connected to Him.

Our preparation for the time of the end may never be complete, but at least when we hear that the end is near, that the Bridegroom is coming, we can embrace His return with five simple words: “Come out to meet him” (Matt. 25:6).