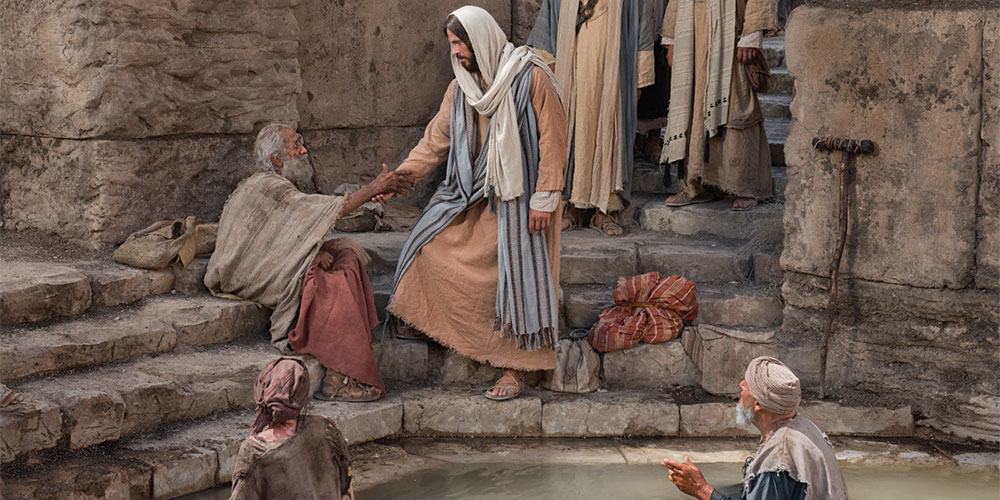 I tried snowboarding once. “Once,” here, is not to be taken as introduction to a fairy tale. It’s not about once upon a time. It is reality; it means what it says; and it gives you a clear idea of how amply successful my experience was. It was “once.”

When I awkwardly slid off the ski lift and onto my behind, a huge board strapped to my feet on top of slippery snow, it dawned on me that I would need my nonexistent ab muscles to be able to heave myself up. There is nothing quite as demoralizing as sitting on the freezing snow unable to move, while watching other snowboarders effortlessly rise up in one fluid motion and gracefully glide off into the sun. Yet no matter how hard I tried, I simply could not get up on my own. I might as well have been glued to the frozen earth beneath me. Think of me in my sad (and awkward) immobility as being temporarily paralyzed.

There is a character in the Bible who understood that helpless feeling of not being able to stand, though for him it was a lot longer than I found myself on that cold mountainside: not a matter of minutes of discomfort, but a lifetime of discomfort—38 years. We do not know his name, but we meet him in John 5. He lies paralyzed by the Pool of Bethesda, along with “a great multitude” who were sick; for legend had it that at certain times angels stirred up the water; then whoever stepped in first was healed.

Their ailments may have differed, but they were one in their goal of being the first into that pool. Much like our world today, every broken person around Bethesda was waiting for their big break, trusting that if they were to succeed, they would be healed, and their lives would be transformed.

The House of Merit

It’s ironic that the name Bethesda means “house of mercy,” while here in actuality it was much more of a “house of merit”—a tragic misconception of the character of the God of life and wholeness; a distortion that came to be part and parcel of a community’s thinking, and a deception that was most punishing to the society’s most vulnerable. After all, the prize went to the one who had the sharpest eyes or ears and could first detect the angelic ripple; the one with the fastest legs that could propel them in. In it you could hear a first-century expression of sociobiology more firmly established by our world’s mid-nineteenth century and forward establishment of the theory of evolution with its mantra of “survival of the fittest.”

The pools of Bethesda around which we lounge may take varied forms and engender any amount of modern and different lamentations from those of the paralytic and his close yet unfriendly company. But their moral, intellectual, and spiritual similarity to his distressing first-century experience are still quite recognizable. Many of us still spend our lives camped out by our houses of merit: if only I could just be smart enough; if only I could be good enough; if only I could be the perfect son/daughter/parent, then God would heal whatever is wrong with my life.

The first problem of the house of merit is believing that we can heal our brokenness through our efforts.

Jesus comes to this paralyzed man, and asks him a seemingly crazy question: “Do you want to get well?” (verse 6).

Here was a pointed, dramatic question. How would the man respond? In answer to Jesus’ out-of-the-ordinary question he also departs from the standard “Yes, of course!” or “Not really!” or even “What do you mean, sir?”

The pools of Bethesda around which we lounge may take varied forms and engender any amount of modern and different lamentations.

Instead, he responds glumly, “I have no one to help me into the pool when the water is stirred. While I am trying to get in, someone else goes down ahead of me” (verse 7).

That’s a pretty lame excuse (pardon the pun) to give the Great Physician standing right before you. Yet it’s the kind of thing we often say to God. Do we really want Jesus to heal the hurts in our lives, or is it easier just to hold on to the hurt? When God asks if we want to be loosened from our chains of addiction, do we whine, “But God, it’s too hard to give up!”

As much as we may hate to admit it, the reason many of us find ourselves stuck where we are is that there are actually benefits to our brokenness. Why else would we stubbornly cling to our hurts, habits, and hang-ups? Let’s face it: we sin because it feels good!

For the paralyzed man by Bethesda, I can think of many worse places to be than sitting by a pool every day. If he were healed, would he have to start working? to stop depending on others to bring him food and do his laundry?

All too often we hold on tightly to the things that paralyze us spiritually. Our lame excuses belie our belief that there are benefits to being broken, that the rewards of staying outweigh the advantages of leaving.

The second problem with the house of merit is basically preferring the bondage of our efforts to the freedom God offers. It’s worth taking a moment to pause and think: Do we truly want Jesus to heal us and release us from the bondage of our brokenness?

So how do we get out from the house of merit? For the paralyzed man, “Jesus said to him, ‘Get up! Pick up your mat and walk.’ At once the man was cured; he picked up his mat and walked” (verses 8, 9). It was as simple as that!

It would have been easy for the man at the pool to laugh off Jesus and dismiss Him as a nut. But fortunately, he had enough faith to take Jesus at His word and act on it.

It takes faith to trust God enough to leave our house of merit. But Jesus gives us the grace we need to walk in newness of life. The apostle Paul reminds us, “He who did not spare his own Son, but gave him up for us all—how will he not also, along with him, graciously  give us all things?” (Rom. 8:32). Jesus died on the cross to pay the penalty for our sins. The blood He shed washes us from sin and its bondage. The very fact that He rose from the dead demonstrates His victory over Satan’s oppression, and we can be part of that victory if we only reach out to Him in faith. He still calls to us: “Get up and walk!”

If you saw a man who had been bedridden for 38 years suddenly start walking, I’m sure the first thing you would say to him—after your initial shock—would be “How come you’re walking?!”

Yet there were people in the streets he walked who apparently missed the obvious. In the story’s turn from physical paralysis to commentary on its spiritual dimensions the first thing out of their mouths was, “It is the Sabbath; the law forbids you to carry your mat” (John 5:10). Jesus’ command to the man to take up his mat on the Sabbath was His bold and headlong dive into spiritual and theological controversy with His society’s religious elite. Even though this bed was no Tempurpedic, memory foam, 1,000-coil spring mattress but rather just a thin mat, Jewish traditional law provided strict regulations regarding the carrying of objects on the Sabbath.

Jesus intentionally used this dispute to invite the religious leaders to dialogue with Him. It enraged them and made them all the more determined to kill Him (verses 16-18). But Jesus felt it was important enough to engage the Jews in this, and it also provides a lesson in comparison between them and the paralyzed man. After all, just as the paralytic almost missed the fact that he was talking to the Master Healer, the Jews missed the fact that they were talking to the Creator of the Sabbath. The paralytic had initially limited how God could work through the stirring of the waters, just as the religious authorities limited how God could keep the Sabbath.

Do we have a paralyzed religion as those religionists did? When God has provided abund
antly for us out of His mercy, do we miss the obvious and complain about what we don’t have? Do we look so long at the closed door that we miss the open window?

The Sabbath is a chance to look at things with the eyes of faith and trust that God will give us all we need.

When someone comes to church who hasn’t been there for a long time, do we miss the obvious and say, “Why is your skirt so short?”

When a church leader shares a prayer request about a struggle over sin, do we miss the obvious and gossip, “How can someone like that be a leader?”

Rather than being a religion founded on mercy that resulted in a growing faith walk with God, the religion of the Jews had become a works-based, critical, and harsh religion that limited God and stunted spiritual growth.

The Sabbath: Symbol of Merit or Mercy?

In a real sense, Jesus’ hostile contemporaries occupied a house of merit that brought them much pride. Their evaluations included some of the highest points that could be earned for not breaking the law, including the Sabbath.

Ironically, God created the Sabbath to be a house of mercy. We may spend all week trying to inch toward our pools of merit. But God’s gift of the Sabbath is our chance to stop and rest in God’s pool of mercy. Whether we are striving for better grades, a higher promotion, extra cash, or additional fun, the Sabbath is a chance to look at things with the eyes of faith and trust that God will give us all we need.

Living in the House of Mercy

Do you want to be made well? Do you long to bid your house of merit goodbye forever and join the once-paralyzed man in God’s house of mercy? To live in the house of mercy means leaving behind our tired efforts to heal ourselves, seeing with eyes of faith how God can provide in better ways than our houses of merit ever can. It means looking at ourselves, our situations, the people around us, and at God with eyes of faith without limiting how He is going to work. Then acting in faith to get up and walk with Him daily into a new life.

Hannah Koh Luttrell is a producer at Hope Channel.