Lean In a Little Closer 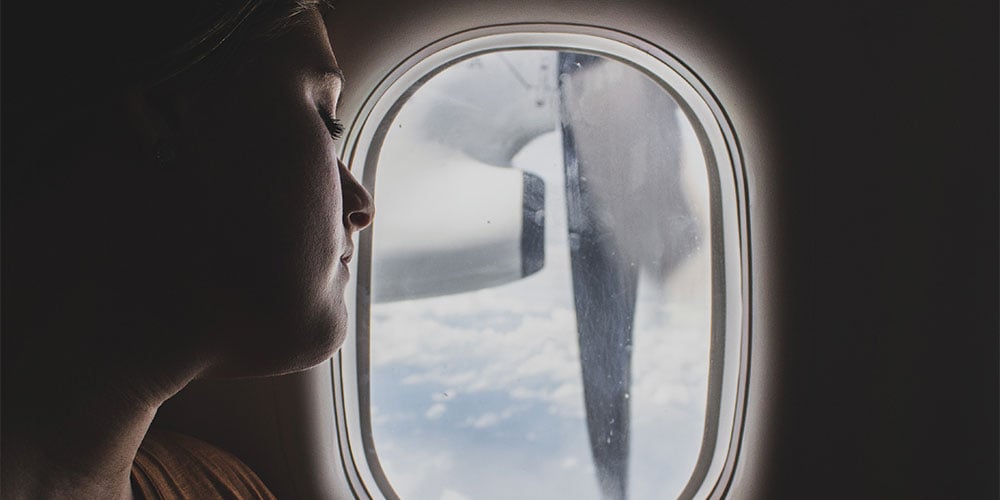 I boarded a puddle jumper flight to our little town. As I got to my window seat, a man was already sitting in it. There he sat, disheveled, looking out the window.

His head jerked toward me unsteadily. “Oh, are you supposed to sit here, ma’am?”

He slid out of the seat so I could climb in next to the window. As he sat down he was clearly pretty well boozed up. “Where are you headed?” I asked, a little too cheerfully.

“Penneldon,” he slurred loudly. The woman in front of us winced.

He smiled broadly at me, revealing the remains of his last meal caked on his front tooth. “How ‘bout you, ma’am?”

Before I could reply, he continued, “I’m just coming back from Alaska. I’ve been up there for four months. Just got out before the ice came. I could’ve been snowed in; then I never would’ve been able to get out.”

He leaned into me, pressing me even further into the corner. “So I’m very glad to be sitting beside you on this plane today, little lady!” His breath was nauseating, and his voice was entirely too loud for polite conversation. Seconds later my seatmate’s head was back on the headrest and he was asleep, mouth wide open, snoring.

As I busied myself grading papers, I eyed this vile-smelling man. His clothes were clean but rumpled. His personal hygiene—well, he had very little. He appeared to be in his 60s, but as with many drinkers, he probably looked older than he actually was. The stubble on his chin, his gnarled hands, and the lines in his face seemed to distract from his obvious desire to connect with other people. I found it sad that maybe he was a friendly guy with lots of promise who had simply gone in the wrong direction at some point in his life.

My musings were interrupted as the man began to lean into me even more. His arm and left leg pressed against me, and his head began to lag in my direction. Oh, please, no!

Just as I pressed myself against the window to get away from him, the flight attendant came through the cabin with in-flight beverages. My seatmate roused himself, his face lit up, and he asked for wine. I should have known. He looked delighted as he gulped it down before drifting off again.

The man’s bloodshot blue eyes had somehow touched me. I asked myself what Jesus would have done with someone like him. Engage him in conversation about his eternal soul? Touch on the very pains that made him turn to drinking? Reassure him somehow? Would Jesus have talked to him about other aspects of his life, to point out that his value and experience is about much more than what he drinks? Would he have offered some suggestions about how to stop drinking?

If Jesus were to chat with my seatmate, He’d probably talk to me, too. I knew what I’d want to hear from Him: reassurance that I am loved by God; that my past has been forgiven; and that there isn’t anything my imperfect soul might devise in the future that would cause God to stop loving me. I would want to know that no matter what, Christ would hold me close, cover my imperfection with His grace, and empower me to overcome my troublesome character flaws.

As I sat studying the tip of my pen, it dawned on me that I might be like this man in many ways: I eat too much (gluttony, it’s called), and it doesn’t seem to go away but is a constant, vexing battle. What makes me so different from my seatmate? Clean teeth, minty breath, clear skin, the ability to think clearly, a bank account, and probably much less pain in my life. But if the flight attendant had offered us chocolates, I’d have gobbled down a couple and wished for a third. I am no different, really.

Maybe the only thing I could do was to stay with him—shoulder to shoulder, as one more sinner, one more member of the human family for whom Christ died.

So the drunkard and the glutton rode quietly together for the duration of the flight: one slender, the other sober.

As the plane lurched and soared toward its final destination two people greatly in need of God’s grace sat shoulder to shoulder, waiting to see what God would do in their lives. Wherever my seatmate is now—waking up from a bender, or on his way to church—God is as merciful to him as He is to me. He is loved of God no less and no more than I am.

As I lean back from the table at a church potluck or lay out a balanced meal for my family, God’s goodness and love bathe me as much as it flows to my seatmate, wherever he is.

We’re really all the same, all in need of what Jesus came here to give us. Every one of us.