It’s not only for children. 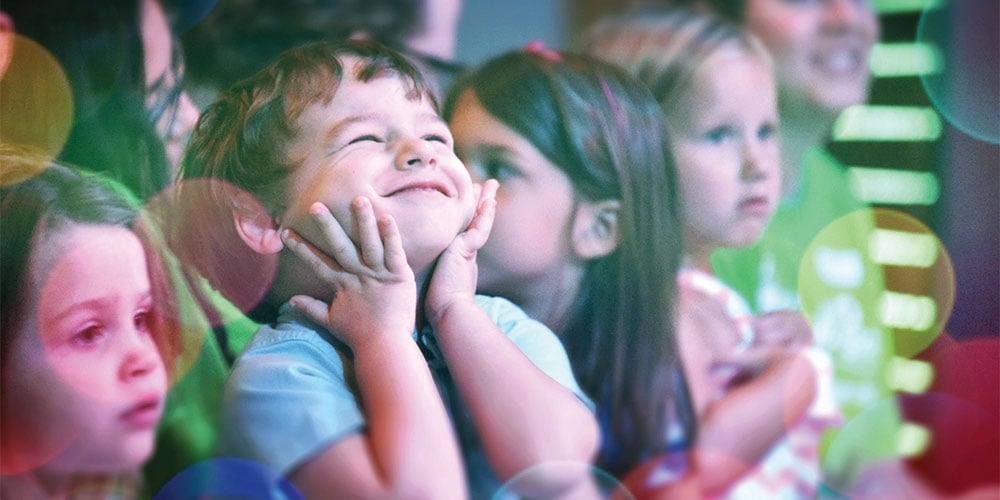 Almost every week in churches across North America and the world, children come to the front of the sanctuary during the worship service to enjoy a story told just for them. A well-told children’s story is appreciated by young and old alike. Little ones enjoy the opportunity to get up and move about, see their friends up close, and hear a story they can relate to before the “adult-targeted” part of the worship service begins.

In too many cases, though, the story that is intended to be of interest to the younger group completely misses the mark. This is sometimes evidenced by children who sit there staring at the ceiling or floor, fidgeting, or exhibiting general restlessness. While there are many reasons individual children might not be paying attention, when the whole group is disconnected the problem may be the story rather than the children. Many children’s stories are too complex and not structured for the level of cognitive development of the children they are intended to reach. Before we discuss what can be done to correct this problem, let’s unpackage it.

In the early twentieth century a Swiss psychologist, Jean Piaget, identified and described four stages of cognitive development. Simply stated, cognitive development is a field of study in neuroscience and psychology that focuses on how the brain processes and understands information, language, and other aspects of neurodevelopment.

It is the second stage of cognitive development Piaget describes—the preoperational stage—that is relevant to this discussion. This stage defines the cognitive development of children ages 2-8 years, approximately the ages of the children who generally come forward for the children’s story. In these early years children have begun to have pretend play but still think very concretely about the world around them. They do not have abstract thought, and they struggle with logic and taking the point of view of other people. They are concrete thinkers, they have trouble with concepts of constancy, and they will not develop abstract thinking skills until their teen years.

The worship service should be utilized to demonstrate God’s love; not hold over children the threat of punishment.

Concrete thinkers, for example, might think about their individual parents; whereas abstract thinkers might think about parenting and its associated responsibilities. If you ask concrete thinkers why they want to attend college, they might say it’s because their parents did. Abstract thinkers might say that going to college and performing at a very high level would be necessary for them to become a veterinarian.

How does this apply to our children staring at the ceiling during the children’s story at church? Consider the concept of the substitutionary sacrifice of Jesus for our sins. Most adults have a hard time grasping the concept. For a concrete-thinking child (approximately 2-8 years old), this concept is way beyond their comprehension. This would be the equivalent of asking a first-grade student to solve a quadratic equation. Their minds just cannot grasp the concept, no matter how competently we explain it.

When young children are told that they are sinners worthy of death, but that they can be covered in Jesus’ blood, which cleans them from all unrighteousness and makes them acceptable to God, we can only imagine what this may mean to them. Is it possible they are thinking, I pulled my sister’s hair; is that why I have to die? I took my brother’s toy car; is that why I have to die? Do I really need to have blood poured on me? How does blood clean me? That’s gross! Why does God like me best when I’m covered in icky blood? Wouldn’t a shower be better? Or maybe they don’t ask these questions. Maybe they just stare at the ceiling.

Another trap to avoid is telling Bible stories as sanctified Aesop’s fables. “Here is the moral of my story: Don’t do this bad thing, or this bad thing will happen to you. If you ride your bike when your parents tell you not to, you might fall off and break your arm. Don’t disobey your parents.”

Lessons in childhood obedience and consequences are essential to child development. Behavior and consequences for the preoperational child, however, are best understood in natural consequences within the love and boundaries of caregivers. The worship service should be utilized to demonstrate God’s love; it is not the appropriate place to hold over children’s heads the threat of punishment for disobedience.

What can we tell kids instead? Here are a few suggestions:

Nature nuggets are wonderful ways to tell kids about an amazing God who makes amazing things for His amazing kids.

Bible stories can be told in such a way that they reveal God’s love for us. For instance, when telling the story of Jonah and the whale, emphasize God’s love and patience for all people, rather than “Don’t run away like Jonah, or a big fish will gobble you up.”

Choose stories that focus on the positive aspects of the basic Christian life, such as faith, hope, love, kindness, politeness, forgiveness, and so forth, rather than on the negative aspects of disobedience, doubt, hatred, and anger.

Instead of a story, perhaps consider singing an energetic action song that talks about Jesus’ love. Songs with hand motions are a wonderful experience during which the congregation can stand and participate with the children. Including actions with singing also strengthens the neural pathway between both hemispheres of the brain—an additional plus. When adults stand and join in with the actions, they create a wonderfully affirming experience with their children.

Those who tell children’s stories have absolutely no intention of hurting or boring the children. We applaud those who are willing to lead our children in worship. Our hope is that we realize that children are not just younger versions of ourselves; rather, they are developmentally at a completely different level and need their stories gauged accordingly.

Lift up Jesus. Tell the children again and again how much they are loved by the King of the universe, and you just might see little eyes come off the ceiling as you “show and tell” them Jesus.