God’s prophets had a lot to say about social justice. 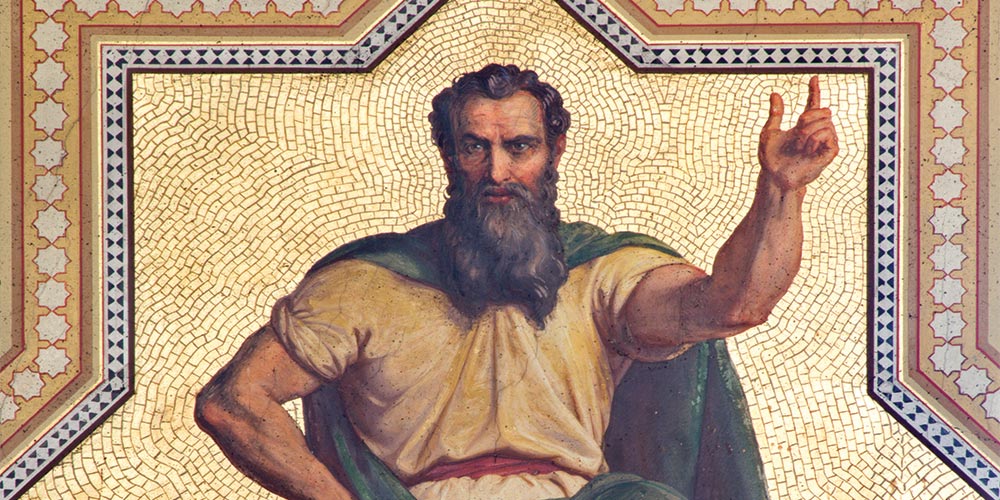 Sabbath is a happy day; I love every Sabbath": sing it or say it, I do. But does God?

The details evade my proper recall, but not the occasion or the student involved: it was, in all likelihood, from Isaiah’s opening salvo. One outraged student of mine felt that my quotation and commentary, whatever they were, misused God’s Word. I sounded too hostile; whatever I had said gave not enough deference to the sacred Sabbath institution. Sabbath was very precious to him. As it is to me.

Sabbath is a happy day. I love every Sabbath: regular sunset-to-sunset Sabbath; even fasting and prayer Sabbath, where you spend the entire day at church, and go out at midafternoon to share faith on an empty stomach; and, of course, Thirteenth Sabbath, the one at the end of every quarter (whether Thirteenth or not!) that you need to pick if it’s your first random attendance at what Adventists call Sabbath School.

For Thirteenth Sabbath may well be Adventism’s most consistently spectacular Sabbath around the world. It’s the Sabbath when the church’s finest—cutest babies, irrepressible 3- to 5-year-old toddlers from kindergarten, the primary division’s 6- to 9-year-olds, juniors and teens from 10 to 14 years old—all get to parade, sing, distract, amuse, and totally entertain adult attendees for 30-45 minutes or so of Sabbath School time; they and the precious, unsung saints of our congregations—those gentle, sensitive, untiringly patient women (mostly) who dedicate themselves, year upon year, to teaching rambunctious and vulnerable tiny tots who Jesus is. So, yes, I love God’s gift of Sabbath.

But the God of Sabbath has come, at times, to such outrage about my Sabbathkeeping that He repudiates it in absolute terms. Feel the fury: “Stop bringing meaningless offerings! Your incense is detestable to me. New Moons, Sabbaths and convocations—I cannot bear your worthless assemblies. Your New Moon feasts and your appointed festivals I hate with all My being. They have become a burden to me; I am weary of bearing them" (Isa. 1:13, 14, author's rendering).1

Fighting, unsettling words! Words of “some of the most disturbing people who have ever lived,” writes Abraham Joshua Heschel: ancient Israel’s prophets.2

Their royal blood, sacerdotal heritage, or access to the king’s ear may establish that prophets were people too—with relatives, backgrounds, and friends. But none of these details is definitive of prophecy or the prophet: Isaiah’s royal blood didn’t protect him from being murdered by his youthful cousin, evil King Manasseh; Jeremiah would hardly care to brag about his priestly background: it simply meant that he had inherited his family’s 500-year-old curse from weak-willed Eli (1 Sam. 3:11-14) and politically bumbling Abiathar (1 Kings 2:26, 27); and Elisha’s great advice to King Joram (2 Kings 6:8-12) didn’t keep the king from swearing to take off his head later on (verse 31). Divine calling notwithstanding, prophets were more the plagues of their society than its heroes.

He was not just another city planner or social engineer: He was their Saviour.

Unlike priesthood and royalty, prophets enjoyed no natural heritage. Nor were they allowed to submit job applications, affirming testimonies, or recommendations, whether glowing or other. Hence the inappropriateness of both youthful Jeremiah’s and seasoned Amaziah’s application forms for and against the role (Jer. 1:6; Amos 7:12). God, by His personal determination, exclusive of Samuel’s and Elisha’s schools,3 or Amaziah’s and Jeremiah’s curricula vitae, called and commissioned, appointed and anointed, His prophets (Heb. 1:1). Neither status, nor ritual, nor some experience of the nocturnal subconscious, established the credentials of God’s prophet (Num. 12:6; Deut. 13:1-5; Jer. 23:27-34; 27:9, 10, 14, 15).

Popular acceptance played no role (Jer. 1:10, 17-19; Matt. 23:34; Acts 7:52), and frauds whose folly exposed their alternative authority could incur the death sentence (Deut. 13:5). In the ninth century B.C. Elijah burst from nonentity onto Israel’s national stage to harangue and humiliate King Ahab with the same humanly unverified yet imperious authority displayed a millennium later by his holy antitype. Crowds poured out to the desert from the region’s secular, religious, and commercial centers to hear the voice of John the Baptizer commanding all humanity to get things ready and to get themselves ready to meet God (Matt. 3; Mark 1; Luke 3).

Divine determination alone established the one variously known as seer, prophet or prophetess, man of God, or servant of God,4 as a messenger appointed to live out and lift up heaven’s truth on earth.

Israel’s prophets thoroughly validate Heschel’s disturbing claim—disturbing because their impolitic metaphor and ethical standard will not adjust to our civilized notions on language and conduct; and disturbing for the level of disruption their intervention brought to their own society. They confounded their contemporaries in more ways than need be listed here—their programmatic uncouthness of manners;5 their choice for public contention at the sites of public reverence and deference;6 their abrasive confrontation with all and sundry authority and power;7 their straightforward exposé of the pretenses of the pretender prophets,8 and the divinely derived authority they exercised to denounce everybody everywhere in the world.9

More often than not, prophets could be counted on to violate the public taste, hew the politically incorrect line, and articulate offensive pronouncements that generated public spats. Thus Jeremiah, messenger of doom, proclaiming imminent destruction and extended exile (Jer. 27), comes up against optimistic Hananiah, who predicts total national restoration in two years’ time (Jer. 28:1-4, 10, 11). The confrontation ends tragically for the nationally inspiring Hananiah.10 But futuristic prediction was not the primary burden of God’s prophets. Their raison d’être was promoting His character among His people. Their rage against ungodliness among their neighbors, indignation against immoral law making, offense at high-level unethical living, and lament on the national degradation to which it led were only what He asked.

Their goal was not desirable political outcomes, and their divinely directed idiosyncrasies only secondarily related to their kids’ peculiar names,11 65-year horizons,12 or being remembered as gauche. Their undergirding, overriding motivation was the glory of the God who commissioned them. The prophets were not “social reformers. They were theological reformers.”13 “What does the Lord require of you . . . ?” (Micah 6:8).

God’s will for His people was no secret: He was not just another city planner or social engineer—He was their Saviour. When He rescued them from Egypt to take them to Himself, He delivered the instructions on their relationship for life with all the visual and auditory reinforcement necessary to convey the uncompromising importance of everything He said. The roar and fire of the encounter overwhelmed and terrified them (Ex. 20:18, 19).

God and Moses wrote it all down (Ex. 24:4; 31:18)—moral rules, health rules; social relationships, including those with strangers: “You shall not wrong a stranger or oppress him, for you were strangers in the land of Egypt” (Ex. 22:21). You must not oppress strangers: you know how it feels to be a stranger (see Ex. 23:9). You must care for foreigner, widow and fatherless, or I shall be angry and "kill you with the sword, and your wives shall become widows and your children fatherless” (verses 23, 24).

Half a millennium later the Sabbath keeping continued , but solicitude for widows, strangers, and orphans had gone by the board. God could see that they thought everything was fine: “They seek me day by day and delight to know My ways,” behaving like “a nation that has done righteousness. . . . They ask Me for just decisions, they delight in the nearness of God” (Isa. 58:2).

In their new status quo some stood in prosperity while others sank into starvation. It had not just happened ex nihilo, but the contrivance was wholly legitimate, and the people were baffled that their fasting didn’t seem to impress God. But God would have none of their postured decency: “Woe to those who enact evil statutes and to those who constantly record unjust decisions, so as to deprive the needy of justice and rob the poor of My people of their rights, so that widows may be their spoil and that they may plunder the orphans” (Isa. 10:1, 2).

Their Sabbath practice proceeded according to the letter of divine law while they made laws to legitimize their ethical abuses. God called them murderers, hands “covered with blood (see Isa. 1:15-17). Their covenant breaking was at its worst here, and God’s prophets were at their most furious. They could not help denouncing the hypocritical legislators who enshrined injustice while calling out “Lord, Lord” (see Luke 6:46).

It was a crude socioreligious ethic that could, each seventh-day Sabbath, celebrate God’s authoritative love for the whole of creation, while disregarding, even extorting, His most vulnerable children. But the voice of prophecy that denounced injustice also taught a better way to fast and keep Sabbath, a way that attended to society’s excluded and marginalized as God Himself attends to all human vulnerability. The fast that God marks out eliminates all the binary dichotomies—between God and me, between us and them (the strangers). It celebrates the end of all sin’s divisive and dividing hierarchies that save some and lose others, feed some and starve others, house some and dispossess others, or include some while excluding others.

It turns to togetherness of the intimate kind—beyond mere handshakes and theoretical consensus. More than visiting the urban center to serve at a soup kitchen, it integrates the margins into my family, bringing society’s desperately wretched home to my house (Isa. 58:7), as He will take us all to His (John 14:3). The genius of the gospel is not accommodation. It is reconciliation (Rom. 5:10; Eph. 2:14, 15; 2 Cor. 5:19).

Glory in the earth renewed will feature no housing projects for the poor or centers for the indigent. It will climax the prophetic message of justice: You fed me when I was hungry; you quenched my thirst; you sheltered me when I was a stranger; you invited Me home (see Matt. 25:35).

Lael Caesar, Adventist Review associate editor, prays not to miss sharing his next cup of water with Jesus.