But What Did Luther Mean? 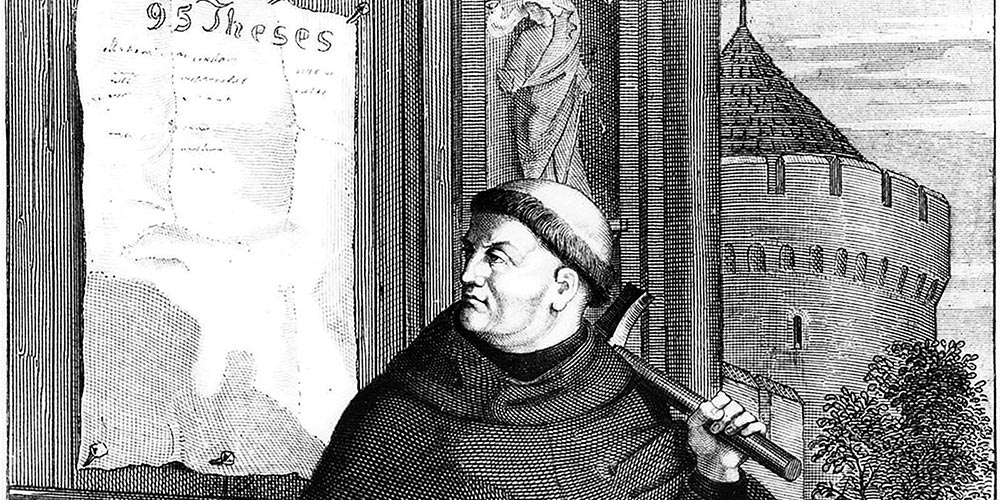 The story of a German monk nailing theses to a church door on October 31, 1517, is the story of the start of the great theological debate that brought us the Protestant Reformation. Paul’s epistle to the Romans bears fair blame for this.

Paul’s Letter to the Romans

Texts such as Romans 1:17 and 5:1, 2 were key to Martin Luther’s theological understanding, of vital importance to his theological argument. In the preface of his commentary to Romans, Luther points out the need to apprehend certain key terms such as justification, faith, peace, grace, hope, and glory, before tackling a study of the epistle.1 These terms, all found in the passages mentioned above, are just so many key words for describing the process of salvation from beginning to end.

According to Romans 5, God can make us different people: “Being justified by faith, we have peace with God through our Lord Jesus Christ: by whom also we have access by faith into this grace wherein we stand, and rejoice in hope of the glory of God” (Rom. 5:1, 2, KJV). Believers can be at peace with God, though for some, finding peace may take a lifetime.

Luther’s wondrous new light that he was driven to shine upon the whole world was how sinners may access grace: not by circumcision; not by our meritorious works; but just by faith in Jesus Christ.

Why the focus on Jesus Christ? Because He makes all the difference: we are “justified freely . . . through the redemption that is in Christ Jesus” (Rom. 3:24, KJV).

Justification is a judicial term. To be justified is the opposite of being condemned. The gospel message is that though sin condemns us, accepting Christ’s sacrifice by faith absolves us. The final judgment permits only two possibilities: justification or condemnation. Without Christ all stand condemned; but everyone who is in Christ is justified. For them there is no more condemnation; they are at peace with God (Rom 5:1; 8:1). This is our understanding from the Bible, which explains itself, and whose explanation is self-sufficient. God would have us apprehend from His Word everything related to our salvation, including such key terms as:

Propitiation—a cultic term, the sacrifice God offered to satisfy justice: God sacrifices His Son as “a propitiation through faith in his blood, to declare his righteousness for the remission of sins that are past” (Rom. 3:25, KJV).

Redemption—a business term, the price God paid for our ransom: we are “justified freely by his [God’s] grace through the redemption that is in Christ Jesus (Rom. 3:24, KJV; see also Col. 1:14).

Justification—a judicial term, God’s legal defense that declares us innocent (as above, Rom. 3:24).

Reconciliation—a family-based term, God’s embrace to restore us to a relationship with Himself: God has “reconciled us to himself by Jesus Christ” (2 Cor. 5:18, KJV).

Understanding God’s use of these biblical terms is reason for profuse thanksgiving: we can thank God for His sacrifice; for the price He paid for our ransom; for declaring us innocent when we know we are not, and for His restoring embrace.

In Jesus’ parable about the prodigal son, we hear, in the story of that father’s embrace of his once lost son, Jesus’ narration of the story of our salvation.

Luther was not the only one interested in the topics discussed in his theses. But he was a masterful interpreter of the pervasive feeling among other scholars of his time. Others had attempted to introduce changes,2 often through church councils, but also through individual and collective efforts.3 Luther’s theses impacted the society of the late Middle Ages the way they did because they embodied the sentiments of many Germans of the day.

Religious motivations powerfully influenced Luther’s internal journey and external action; the Augustinian monk had experienced distressing anxiety about securing his salvation. But then Paul’s categorical declaration, “the just shall live by faith” (Rom. 1:17), brought him out of his deep crisis. He understood that a merciful God justifies us through faith. In light of this principle, all Scripture took on a new meaning. Everyone—indulgence salespeople, indulgence purchasers, preachers (in fact, especially preachers)—was interested in the “how” of salvation. Luther was “scratching where it itched.” His writings spread.

Starting in 1514, Luther preached against the abuse of indulgences, and how they made grace cheap instead of leading to true repentance. In 1517 his parishioners were returning from buying Tetzel’s indulgences, believing that they did not need to repent and change their lives to receive forgiveness of sins. Luther deepened his study on the topic, and sought expert advice. He preached on the topic several times in 1517, explaining that true repentance was better than buying indulgences. He even taught that buying indulgences presupposed true repentance and confession, otherwise it was useless.

Faith had become a mere commodity linked to purchases of righteousness and shortened stays in purgatory.

Between April and October 1517 Luther stopped preaching these sermons, perhaps because he was preparing himself for writing his theses.

On November 1, at the Church of All Saints in Wittenberg, many relics collected by Federick III, elector of Saxony would be distributed. People who visited the church on November 1, “All Saints’ Day,” had been promised indulgences, something the church offered as “a way to reduce the amount of punishment one has to undergo for sins,”4 or even a system of convertibility.5 October 31 was the eve of a day when the church would be full of people attending celebrations, seeing and procuring holy relics, and, in exchange, dispensing with sins.

With much hesitation and anguish, Luther posted the theses. A few friends encouraged him. The theses were an academic proposition expressed in Latin, not German. Luther intended for them to be discussed at the University of Wittenberg, where he taught. Initially, he had nothing else in mind. The document began:

“Out of love for the truth and from a desire to elucidate it, the Reverend Father Martin Luther, Master of Arts and Sacred Theology, and ordinary lecturer therein at Wittenberg, intends to defend the following statements and to dispute on them in that place. Therefore, he asks that those who cannot be present and dispute with him orally shall do so in their absence by letter.” His introduction concluded, “In the name of our Lord Jesus Christ, amen.”

Then followed the 95 theses. After the document was printed in Latin, fixed on the whiteboard of the university, and sent to the authorities, people began to make and share copies of Luther’s theses.

The theses first address the biblical basis of forgiveness. Discussing the value of indulgences, they probe the grounds on which human beings are forgiven their sins. What does the Bible say about it?

Second, they focus on indulgences and the authority to administer them; also, on the possibility of doing favors for those who have already died, and on the efficacy of such means. God’s granting of complete freedom and forgiveness to the truly repentant Christian makes it a blasphemy to consider indulgences as a gift from God.

Third, Luther addresses the relations of these indulgences to Christian ethics, exploring the possibility of abuse from religious leaders.

Of his 95 theses, two in particular, 1 and 62, express Luther’s thought. Both are brief statements. In the first thesis he writes, “When our Lord and Master Jesus Christ said, ‘Repent’ (Matt. 4:17), he w
illed the entire life of believers to be one of repentance.” Luther quotes Matthew 4:17 from the Vulgate [Latin version]. He insists that the true repentance Christ requires for experiencing the forgiveness of sins is an inner, spiritual action rather than an external sacramental confession. Indulgences led Christians to avoid true repentance and pain for sin, believing that purchased indulgences could replace true repentance. Indulgences discouraged Christians from giving to the poor and performing other acts of mercy, since they believed that indulgences were of more spiritual value.

Luther’s own struggles with penance gave him clear understanding of the anxieties and worries of his audiences. In his own life he had fought hard to distinguish between contrition and sincere repentance, a contrition born of fear of hellfire. Following years of torment in which faith had become a mere commodity linked to purchases of righteousness and shortened stays in purgatory, he found the gospel renewing, refreshing, liberating, incomparable. His thesis 62 declares, “The true treasure of the church is the most holy gospel of God’s glory and grace.”

Luther quotes Jesus, who begins His ministry by saying, “Repent: for the kingdom of heaven is at hand” (Matt. 4:17, KJV). In true Christianity the solution to the problem of sin implies repentance. But in the Middle Ages, other elements were added: spiritual efforts, material substitutes, monetary sacrifices. And there were abuses of the system that Luther felt were affecting priestly service. Some people stopped confessing their sins, mistakenly thinking that indulgences had solved their problems.

But living a Christian life requires us to change the wrong course that leads us to sin, turn back to God, and accept His effort to embrace and restore us. It is impossible to purchase entrance into Christ’s spiritual kingdom, or experience “no regrets” about our previous status and conduct in life. Jesus says that entering His kingdom begins with repentance—regretting our past—itself a gift from God, along with His forgiveness of our sins (Acts 5:31).

Another striking point of thesis 62 is that the church has a treasure. Luther discusses merit theology, the treasure chest of merits that could be offered. He writes, “Do not forget that the greatest treasure of the church is the holy gospel of glory and grace.” The treasure of the church is the gospel, that is, the good news of Jesus Christ. There is no other treasure besides Christ and the good news of His grace—the undeserved favor He extends to us to extract us from our disastrous state and condition, and offer us the security of His forgiveness, peace, and hope of eternal glory. In His parable of the treasure, the man who finds it sells everything to purchase the field where the treasure is buried. The treasure of the gospel is worth more than anything else on earth.

Luther’s Theses and Us

Are Luther’s theses from 1517 relevant for us, 500 years later? Can we learn from them a thing or two about salvation? Yes, we can: Luther’s theses explain how Christians can achieve forgiveness, justification, and salvation by faith in Jesus. Even more, they lead us to a better understanding of the God of the Bible.

Luther’s reflections continue to point to the importance of individual study of Scripture. Study of the Bible on its own terms introduces us to the unique God of love who offers forgiveness and eternal life through Christ. Meeting Him through Scripture eliminates all those barriers erected by false teachers and twisted doctrines that stand between God and us, children of His selfless, all-sacrificing love. Hearing His Word tell how He feels about us helps us to respect and value ourselves and each other as God values us.

Luther’s mission continues far beyond his time. His work made the Bible more accessible; religious freedom became important; and many discriminatory social structures were abolished. But too many people still do not know that “being justified by faith, we have peace with God through our Lord Jesus Christ” (Rom. 5:1, KJV).6 Many have yet to be inspired by this foundational text so important for Luther and the Reformers. We who have heard now share his duty of spreading the gospel’s light so that men and women everywhere may savor peace from God that passes all human understanding. The privilege of such work is a debt we owe to the medieval messenger God used to bring us the truth of our own reconciliation.