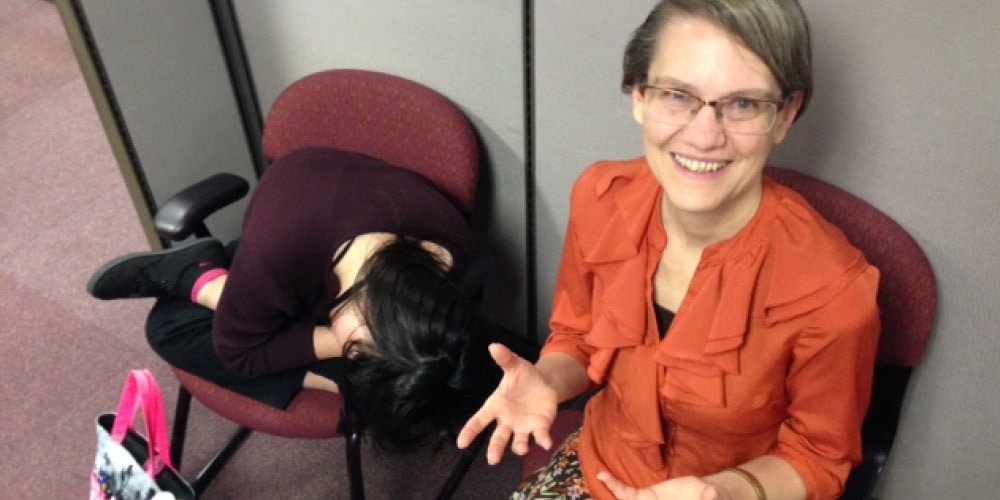 Terri Saelee planned to go to South Korea to teach English after her first year at Union College in her U.S. home state of Nebraska.

But she began to pray about whether she should spend a year working with refugees in Southeast Asia instead after hearing about their plight during a meeting with Union College president John Wagner in 1982.

Saelee became convinced that God wanted her to teach English at a refugee camp in Thailand when a Congresswoman helped her get a much-needed passport in just four days. The fast turnaround, which usually takes two weeks, stunned not only her but also a well-connected family friend who had just been forced to cancel a trip to Japan after failing to obtain a passport within a week.

Initially I experienced some culture shock. I felt a distaste for some of the worldly things that I saw in the culture. So I prayed, “Lord, please give me a love for these people.”

“No one could believe that we got the passport in four days,” Saelee said in an interview. “The friend knew people in government and couldn’t get his passport renewed in the week. This illustrated to me that God was working for me and this was His plan for me.”

Saelee ended up staying in Thailand for four years — and learning two languages — before returning to the United States to complete her studies.

Today she is the director of Adventist Refugee and Immigrant Ministries, a position that she has held since the North American Division entity was founded in 2009. A total of 140 new refugee churches have opened across North America under her watch.

Saelee sat down with the Adventist Review at its office in the Adventist world church headquarters in Silver Spring, Maryland, to discuss her passion for refugees and why she thinks they will play a key role in Christ’s Second Coming.

The interview has been edited for length and clarity.

Q: Why did you stay in Thailand for four years as a student missionary?

A: Initially I experienced some culture shock. I felt a distaste for some of the worldly things that I saw in the culture. So I prayed, “Lord, please give me a love for these people.” He answered that prayer and gave me a love. I became acquainted with people. As Ellen White says in her book Education, “It is acquaintance that awakens sympathy, and sympathy is the spring of effective ministry” (p. 269).

God also wove some things into my upbringing that fit well with that culture. My mother grew up on a farm where you had to yell loudly to get people’s attention. But she always spoke softly to us on our Nebraskan farm. She wanted us to learn to listen for God’s still, small voice. When I went to Thailand, I discovered a whole culture of people who value gentleness and quietness.

Tears streamed down my cheeks as I sat in the post office. I praised God for a mother who loved that much.

I taught English at a camp in northern Thailand that had 50,000 refugees from Laos. A pastor and his wife taught Bible classes, which were offered as a bonus to students who signed up for English classes.

As several students neared decisions for baptism, they expressed fear of becoming Christians and seeing the missionaries leave before they understood Christianity enough to live real Christian lives.

When the pastor shared this with me, I didn’t know what to do. I had lived in Thailand for three years and planned to go home. My mother was looking forward to seeing me. But my main goal was the salvation of souls. So I prayed, “Lord, what shall I do?”

One morning I read during my devotions: “The cause of God is to hold the first place in our plans and affections” (Counsels on Stewardship, p. 220)

I thought, “This passage is pointing right at me.” I wanted to finish school, have a profession, and start a family. But it was like God was saying, “Terri, here is the guidance that you have been waiting for. God needs to be first in your plans and affections.”

I decided that my first responsibility was to my family. But my family already knew God. So I decided to call my mother and follow her advice on whether to stay in Thailand or leave for the United States.

I traveled 35 kilometers (22 miles) to find the nearest post office with a public telephone. I called collect because I didn’t have any money. I knew it was expensive.

I said to my mother, “What would you think if I decided to stay another year or indefinitely?”

Her response was immediate.

Without hesitation, she said: “Terri, I will never tell you to come home. If I told you to come home and even one soul failed to hear the gospel, I would regret it for eternity. But if by staying you can help even one soul to know God and to be in the kingdom, it would be worth it even if I never saw you again.”

Tears streamed down my cheeks as I sat in the post office. I praised God for a mother who loved that much. My mother wanted to see me, but she had already made the sacrifice in her heart. The salvation of souls was so important to her that she would give up seeing me again.

Q: Why did you finally leave Thailand?

Then an idea came to mind. I remembered a student missionary in Bangkok and decided to ask if she would be willing to replace me. She agreed, and we spent a month together before I left. God supplied workers for the refugee camp until it finally closed.

I lived in Thailand from the ages of 20 to 24 and ended up graduating at the age of 27, in 1989, from Weimar College with a major in health education and missions.

Q: How did you get into refugee work in the United States?

While at Weimar, I learned that refugees from Southeast Asia were living in Sacramento, about an hour’s drive away.

Then I read in Acts 19:10 that “all who dwelt in Asia heard the word of the Lord Jesus” in two years because of the missionary work of the apostle Paul. God seemed to be saying to me, “There is a little Asia down the street, and you know the language.”

So I prepared a presentation for speech classes about how Weimar College should have an outreach program for refugees in Sacramento. With fellow students, we formed Southeast Asian Community Outreach Works, which first surveyed the refugees about their needs and their interest in Bible studies. Twelve refugees immediately signed up — just like the 12 disciples.

The program grew rapidly. We started a Bible club that became a branch Sabbath School that met every Sabbath afternoon in a grassy area between four apartment complexes. We brought mats to sit on, and children ran from every direction to hear our Bible stories.

About 100 Weimar students participated in the outreach every year, and two new churches opened in Sacramento as a result. I also met my husband, a church planter, during that time.

In 2005, we accepted a call from the Adventist Church to work with refugees in Wisconsin and Minnesota. But by 2008 I was waking up at nights, wondering how many language groups we didn’t know about and weren’t reaching. At the same time, I contacted the North American Division for help. You see, a refugee pastor from another Protestant denomination had decided to be baptized together with all his congregation, and we needed to know the procedure for bringing a whole congregation into the Adventist Church.

I often used to wonder how God would take the gospel to all the world. Now I realize that we don’t have to wait for the iron curtain of communism to be lifted in Asia.

During my phone conversation with Don Schneider, then the president of the North American Division, I poured out my heart about my desire to do more to assist refugees. That led the division to establish Adventist Refugee and Immigrant Ministries in 2009 and invite me to coordinate it. Funds from a 13th Sabbath Offering in 2011 really jumpstarted the ministry’s work.

Q: What is your vision now?

Fifty percent of our budget goes toward church planting among refugees in North America. God has put us in touch with gifted church planters. One of our hired consultants, a refugee pastor, has opened 45 refugee churches in the United States between 2009 and today.

I often used to wonder how God would take the gospel to all the world. Now I realize that we don’t have to wait for the iron curtain of communism to be lifted in Asia. People are leaving those countries for North America. Refugees will play a key role in Jesus’ Second Coming.

Ellen White said this would happen: “As I have testified for years, if we were quick in discerning the opening providences of God, we should be able to see in the multiplying opportunities to reach many foreigners in America a divinely appointed means of rapidly extending the third angel’s message into all the nations of Earth. God in his providence has brought men to our very doors and thrust them, as it were, into our arms, that they might learn the truth, and be qualified to do a work we could not do in getting the light before men of other tongues” (Evangelism, p. 570).

By working with refugees, it’s like a page from God’s strategic plan in heaven has drifted down to Earth.