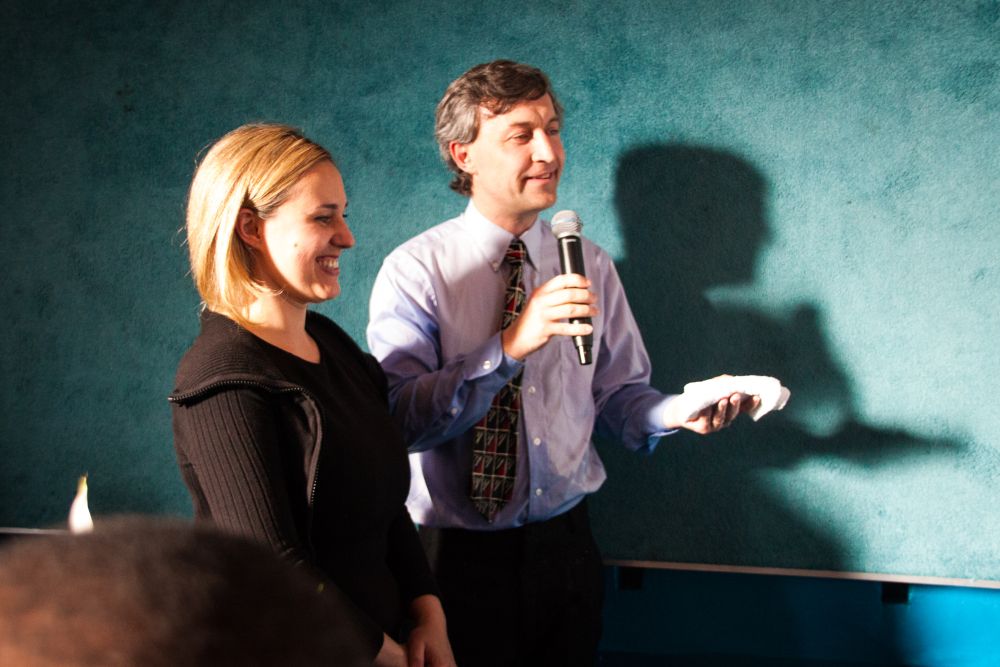 Seventh-day Adventist evangelists seek to share hope, so it was perhaps surprising when a first-time attendee acknowledged that he was scared of Jesus.

U.S. evangelist Mark Finley was speaking during the second night of a four-day series on the life of Christ in Ireland’s capital, Dublin, when the young man had the negative reaction.

“I’m scared of Jesus,” he said in a conversation following the meeting.

The young man acknowledged that he was struggling to like a Christ whom he saw as judgmental and accusatory. This led into a discussion on penance, purgatory, and hell, and the young man left the Crowne Plaza Hotel in a suburb of Dublin with a desire to search the Bible for more answers, church leaders said.

The man was among 10 to 15 new people who attended Finley’s meetings in response to 11,000 advertisements distributed around Dublin, a city where the Adventist Church has struggled to make inroads for years.

Also in attendance were scores of local Adventist members who brought along their neighbors to the Sept. 9-12 meetings, the culmination of Finley’s contribution to a City of Hope outreach effort that the Seventh-day Adventist Church has run in Dublin for the past two years.

“We were really encouraged by the response of the people of Dublin to our advertising,” said David Neal, leader of the Seventh-day Adventist Church in Ireland.

It was Finley’s third visit to Dublin in the past 18 months, and he expressed delight to see how ministers and members have developed a love for evangelism and how the church has grown with almost 70 baptisms over that time.

Finley and his wife, Teenie, also opened a community center in a local church.

On opening night, Finley reflected on the various refugee crises that the world has struggled with over the last few decades, including the ongoing crisis of an estimated 12 million Syrian citizens displaced by the conflict in their country.

Finley quoted Jesus’ words in John 14:8 — “I will not leave you as orphans” — and spoke of the antidote to the pervasive sense of abandonment experienced by many people around the world.

“Scripture brings the hopeful message that we are neither alone nor abandoned, but that there is a greater cause for hope in the life and message of Jesus Christ,” he said.

He also emphasized Ephesians 2:19, which says, “We are no longer strangers and foreigners … but fellow citizens with the saints and members of the household of God.”

Every evening, registered participants had the opportunity to receive a gift such as a study Bible. The audience responded by returning every evening.

On Sabbath, the meeting moved to the Ballsbridge Hotel in central Dublin for a much larger event. The large, 700-seat ballroom filled to capacity as members from across Ireland swelled the numbers of local Dublin church members and their friends for a special Day of Fellowship.

“The music was superb,” said Carol Magee, a church member who traveled 85 miles (135 kilometers) from Banbridge, Northern Ireland, for the day.

Finley spoke about what it meant to identify as a Seventh-day Adventist at this time of the world’s history.

“It is about being part of a message and a project that is much larger than us, a movement to share God's grace with the world that requires the best effort of all of us,” he said.

Many attendees commented that they had never heard the core Adventist message of Revelation 14 — the three angels’ messages of Christ’s soon coming — presented in such positive language.

Attendees shared numerous testimonies during the day about how they were reaching out to others and growing closer to God. A soloist in a local choir told how she had been attending the Adventist church for a year and, as a result of the friendship and care shown, was getting baptized that very evening.

She was not alone. As the day drew to a close, church members converged on the Ranelagh church where pastors Gavin Anthony and Ben Pontanar led them in welcoming six new members through a baptism ceremony.

“The last year has been brimming with outreach events in Dublin,” Neal said, beaming.

He said he was grateful for the support of Mark and Teenie Finley for the City of Hope project, part of the Adventist world church’s Mission to the Cities initiative to share Jesus in the world’s largest cities.

“We have intentionally planned these high-profile events to support the efforts of church members around the Irish Mission,” Neal said. “We are sure that the churches have been energized to continue the outreach efforts. We are extremely excited about the new friendships that we have made over the last two years.”

Neal added: “As the City of Hope project moves into its final phase, our focus is on nurturing the relationships and the new members and to continue the outreach process, albeit on a smaller scale.”

Watch Mark Finley preach about the three angels’ messages of Revelation 14 in Dublin, Ireland, on Sept. 12, 2015.