Where No Missionaries’ Feet Have Trod 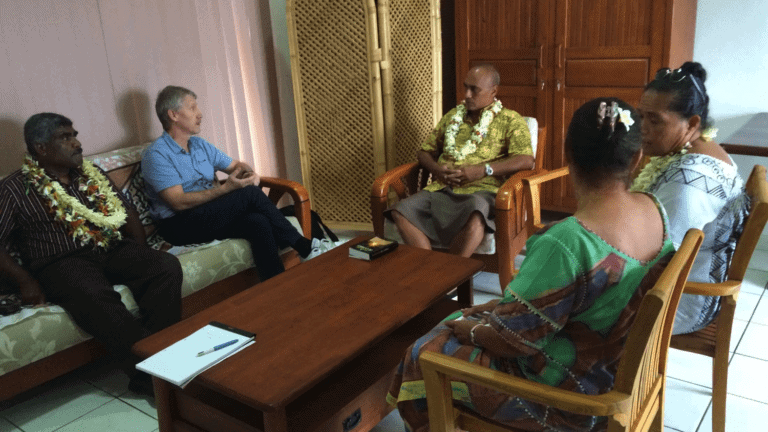 There are many stories of how the gospel entered the islands of the Pacific. One of my favorites is about Mussau, one of New Guinea’s outer islands and today part of Papua New Guinea.

In 1930, Captain G. McLaren and a crew of Fijians aboard the mission vesselVeilomaniarrived at Mussau. They had been warned that they would not be welcome. When they dropped anchor, they were confronted by warlike, loud and threatening warriors, intent on challenging or chasing them away. Under the guidance of the Holy Spirit, McLaren called his crew together, and they began to sing hymns. The din died down, and the warriors listened to the harmony of the music. When they stopped singing the warriors began threatening again and so McLaren and his crew sang again. So it went on and on until sunset, when the warriors left.

Their troubles, however, were not over. The next morning the warriors came back, and this time they brought their chief. He was impressed with the Fijian missionaries. He asked, “What has made the change in your lives? How is it that your teeth are white, your skins are clean and your bodies strong? You tell us what your people did, and we will do the same.” He invited them to stay, saying, “Give us a teacher who can teach us to sing.” The door was opened. The people received the message and Mussau became Adventist.

There was one little spot in the Pacific, however, that was apparently missed by the Adventist Church for many years. This place is the archipelago nation of Wallis and Futuna.

I had the opportunity to visit Wallis recently. Wallis itself has about 10,000 people. It is well-maintained with internet and phone services, good roads, nice houses and an airport. There are 21 tribes with 21 chiefs. And Wallis has two kings.

Why two kings? Because one-half of the island doesn’t like the king from the other half, so they created their own. And so now there is a king of the north and a king of the south. Wallis is a French territory, so most people speak French, and they have strong links to Tonga. But there is no income generation. No exports. Ships come full and go away empty.

With the right government protocols and Jesus leading the way, we finally entered the territory and started to do mission work.

The Adventist work in Wallis has been hard going. The Seventh-day Adventist Church has been refused entry into this country for more than 40 years. After many attempts, the door was eventually opened in October 2008 through a man named Suane, who attended a series of meetings in New Caledonia.

Suane was so touched with our message that he begged the Adventist Church to bring the Advent message to his island, Wallis. As Suane was one of the kings of Wallis’ nephew, he made the impossible happen. With the right government protocols and Jesus leading the way, we finally entered the territory and started to do mission work.

The good news is that today there are 18 baptized Adventist members and on a good Sabbath, there can be up to 30 people in attendance. And we now have a pastor permanently ministering there.

And what of Futuna? At the moment, there is no work on Futuna. There is no Seventh-day Adventist on this island of 4,000 people and we have not been given permission to enter the island.

Even in 2017, these islands are still a frontier for the Adventist mission.

A longer version of this article initially appeared in the Adventist Record.

Commentary
Ted Wilson’s Philippines Trip Was ‘Just in Time’
From visas to rain and a helicopter, God’s timing is called perfect.