This article reproduces notes the Adventist Review printed during its earliest. . . This article reproduces notes the Adventist Review printed during its earliest decades on six leaders of the Protestant Reformation. It concludes with an extended comparison of two of the greatest.

“It is said of John Knox, . . . that it was his frequent custom, while in his own house, to sit at the head of a table, with his back to the window. On one evening, however, he would not take his usual seat, and gave a positive command that no one of his family should occupy it. He took another chair in a different part of the room; and shortly afterward a gun was fired, the bullet of which passed through the favorite window, grazed the top of his vacant seat, and shattered the candlestick that stood upon his table!”

“The bloody Mary is reported to have said that she was more afraid of John Knox’s prayers than of ten thousand of the rebel army.” MARTIN LUTHER (1483-1546), whose biblical discovery of the power and meaning of the cross delivered him from dread of a cruel God, changed his life and altered history.

“He [Luther] had been favored with the best education Europe could afford; but . . . although he sought for the truth as it is in the Word of God, yet he knew not how to obtain it.”

“Very happily . . . for the good, Providence had previously prepared a fit person to give to the distressed Luther, such advice as was calculated to set him free [teaching] him to look to God as to a kind father, . . . with faith in Christ, not in self-mortifications and severe penance.” “Like the Friends, they are opposed to war, and in consequence of their refusal to do military service, they have suffered many persecutions. . . . They are similar to the Baptists in faith, and practice the ordinance of humility. Having suffered much for the truth’s sake, they are favorable to the reception of present truth. The first Sabbathkeepers in Russia were from these and the Baptists.”

“These Germans are the followers of Menno Simons, who taught them to be noncombatants, and baptized by sprinkling adults. As the czar wished to increase the value of his land and elevate his subjects, he welcomed these inoffensive people to his domain, granting them all civil and religious liberty, provided they would not proselyte among the native Russians.” WILLIAM TYNDALE (c. 1494-1536), called the true father of the English Bible because of his success in its translation and distribution; executed, and body burned at the stake.

“William Tyndale, in 1526, printed his English Testament at Antwerp; but those who sold it in England were condemned . . . to ride with their faces to the horses’ tails, with papers on their heads, and to throw their books and themselves into the fire at Cheapside. Tyndale himself was strangled and burned. His dying prayer was “Lord, open the King of England’s eyes.”

Looked in death’s face and smiled, death standing by.

In spite of Rome, for England’s faith he stood,

And in the flames he sealed it with his blood.” 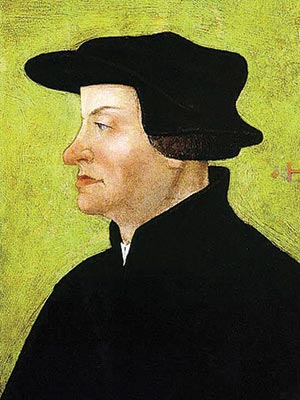 ULRICH ZWINGLI (1484-1531)—Switzerland’s most important Reformer until, and apart from, John Calvin; died in battle against forces resisting his determination to impose the gospel of Christ on all aspects of public and personal life.

“At first he [Zwingli] had the consent of the bishop of Constance, who assisted him in putting down the sale of indulgences in Switzerland; but a rupture occurred in 1522, when Zwingli attacked the fasts as a human invention.” JOHN CALVIN (1509-1564), alternately invited to, expelled from, and invited again to Geneva; eventually remained and ruled until his death; body interred in unmarked grave to avoid the development of cultish veneration.

“Luther was the man of the people—Calvin of the divines. Luther was drawn on to greatness in spite of himself—Calvin became great on system, by a holy energy and an intense feeling of duty. The one was bold, abrupt, impetuous—the other, systematic, accurate, severe. Luther struggled much for sound doctrine—Calvin struggled yet more for piety and holy practice. Luther overthrew—Calvin constructed. The German originated deep feeling—the Frenchman elicited profound thinking from men.

“. . . . Their diverse mental temperaments are exhibited in their views of Satanic agency. Luther, it is well known, thought, or dreamed, or persuaded himself, that he had frequent personal conflicts with Satan visibly—Calvin approached that awful subject with faith as firm, but with the fancy less fixed, than Luther. In this respect, as in others, the Genevese divine may be deemed the complement of the German. Calvin strove as energetically as Luther; but Luther aroused —Calvin tranquilized. The watchword of the one was war—that of the other, order. . . .

“Their mission and their spirit were one. . . . Hence, though they never saw each other, they never felt as strangers, but entertained a mutual respect, while each expressed his belief according to his particular character.”

Editorial
Patience Amid Long Experiments
The pitch-drop experiment teaches our faith community some lessons.
Commentary
Prophetic Denialism:  The High Cost of Ignoring the Warnings
Are Adventists Being Lulled by the Dragon Voice?