A Gift From the River 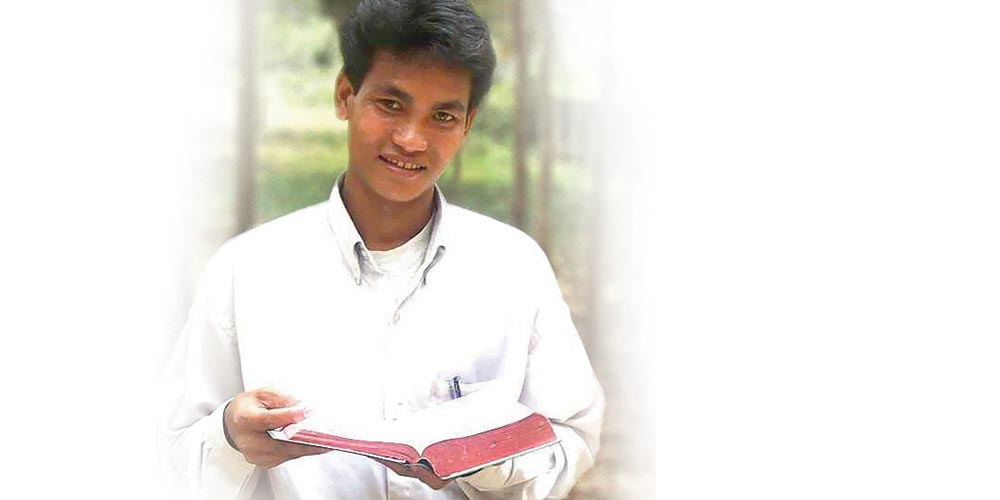 It was such a completely ordinary day that I never expected it would become the most memorable day of my life. I was herding my father’s water buffalo in southeastern Bangladesh. I had recently sat for my final high school examinations, and I was happy and relaxed, enjoying the natural beauty of the area with a friend.

The broad waters of the Chengi River flow by my father’s pasture and the stream is clear and tranquil. Around noon I decided to slip into the water for a cooling dip when something caught my eye. I saw something floating on the water. The current brought this object directly to where I stood. It was a book floating half submerged in the water. On its cover were the words “Pobitro Bíbel.”

“Look!” I called to my friend who was watching from the bank of the river. “It says, ‘Holy Bible!’” We were devoted followers of the Hindu gods, especially Radha and Krishna. Every morning and evening our family gathered to pray and place offerings on their altar. We fasted twice a month and observed the Durga Puja festival with its required offerings and animal sacrifices.

I had heard of the sacred Christian book, but I had never seen one. In fact, I had no desire to look at a Bible or know anything about it, but our parents had sown in our hearts a reverence for holy things. So when I saw the book, I thought, If this is a holy book, I will take it out of the water and treat it with respect. I found a place where I could lay it with its pages open to the sun so it would dry.

Around noon I decided to slip into the water for a cooling dip when something caught my eye.

That evening the book was still damp, so I took it home and, without saying anything to my father, put it in a safe place. For the next three days I carried it with me, placing it in the sun and turning its pages so that they could dry completely.

After three days the Bible was dry, and I began reading it. I read about the Creator God who made everything in heaven and earth. I had read the Hindu scripture, the Gita, but I had never read such things.

I continued reading about the creation of Adam and Eve. The Gita says that the first humans were a husband and wife called Manu and Shataruba. I thought they must be the same individuals with different names. But then I read that the woman was created from part of the man, and when he saw her he joyfully said, “This is now bone of my bones and flesh of my flesh” (Gen. 2:23), a new and surprising idea to me.

One unforgettable day I read the prayer that Jesus taught His disciples (see Matt. 6:9-13). I thought, Until now all my prayers have been selfish. I’ve done nothing but ask, ask, ask, wanting to get a benefit for myself and my family. Now I understand that the Christian concept of prayer is broad. It embraces the world.

As I continued to read I discovered a God who invites people to accept His beautiful offer of salvation. He is patient, and He loves to forgive. My previous life had been an effort to earn the gods’ favor by giving them expensive gifts and by long, exhausting works of appeasement. The rich people I knew could easily win the gods’ approval. But for a poor family such as ours it was difficult to please the gods.

I studied the Gita more than ever in my desire to know the truth. I decided to mark everything in the Bible that was good and helpful with a red pencil and do the same with the Gita. In the Gita I found something to mark only occasionally; but in the Bible I ended up marking entire books.

I made two decisions: First, I decided to read no more in the Gita. Second, I understood that I must become a Christian, although I had no idea how or when that would take place. I had been studying the Bible for a year, and in all that time I had never met a Christian with whom I could talk about the things that were on my heart.

About this time I left home to study at Raozan College in the city of Chittagong. As the pressure of my studies and other activities increased, I dedicated less time to spiritual searching. Five years passed rapidly, and I graduated and returned to my father’s house.

I was helping with family responsibilities when one day I went to Khagrachari, a city about four miles (seven kilometers) from our village, where I met a friend from high school. I asked, “What are you doing now?”

“I work for a Christian church,” he told me.

Great joy came into my heart when I heard this. “You’re a Christian?” I asked.

When we were away from the noisy market, I told him how the Bible had come to me on the river. Then I asked the question that had been so long on my heart: “How can I be a Christian?”

When I asked this, I saw great happiness on his face and he gave me a strong embrace. He told me that in Dighinala, about 15 miles (25 kitometers) from Khagrachari, there was a house of worship where I could receive instruction. He invited me to attend.

The next Saturday I went to Dighinala. When I went inside the building, the people were all sitting quietly with their eyes closed. I didn’t know they were praying. I entered and sat by my friend, but I didn’t shut my eyes. Instead, I looked around to see who was there. I liked what I saw. They appeared to be normal people.

I began to attend church in Dighinala, although I couldn’t go every week because bus fare cost 35 takas (about 50 cents), and many times I didn’t have enough money. But I had great joy in my heart, and I began to talk to my friends about what I was learning. Some of them wanted to go to Dighinala, too, so we agreed to take turns. Two or three of us would go every Sabbath with the money we could get together. Then the ones who had gone would teach the others what they had learned.

Back to the River

For a year we attended church this way. Then I told the pastor, Runat Orbin, that I wanted to be baptized.

The chapel in Dighinala has no baptismal font, so they told us that the baptism would be in the Chengi River. Tears came to my eyes when I realized that I would seal my covenant with God in the same river that had brought me the Bible.

I was baptized with 25 people in the clear waters of the Chengi River. That included seven of my friends whom I had invited. We were the very first Christians among the Tripura people.

I asked the pastor how I could learn more, so I could reach others with the story of Jesus.

He told me about the Bangladesh Adventist Seminary and College and arranged for me to attend.

About a week after I received the Bible from the river, I was working at the house of one of my friends. I heard him speak angrily to his father, “Where’s my Bible? Did you do something with it?”

“I threw it into the river,” his father said. “If you keep reading that book, you’ll become a Christian, and here we are all Hindus.”

When I had a chance, I told my friend about the Bible that had come to me on the water.

“That’s my Bible,” he said. He told me he had received it after completing a correspondence course offered by the Baptists.

To this day he has shown no interest in studying the Bible, the book that changed my life forever.