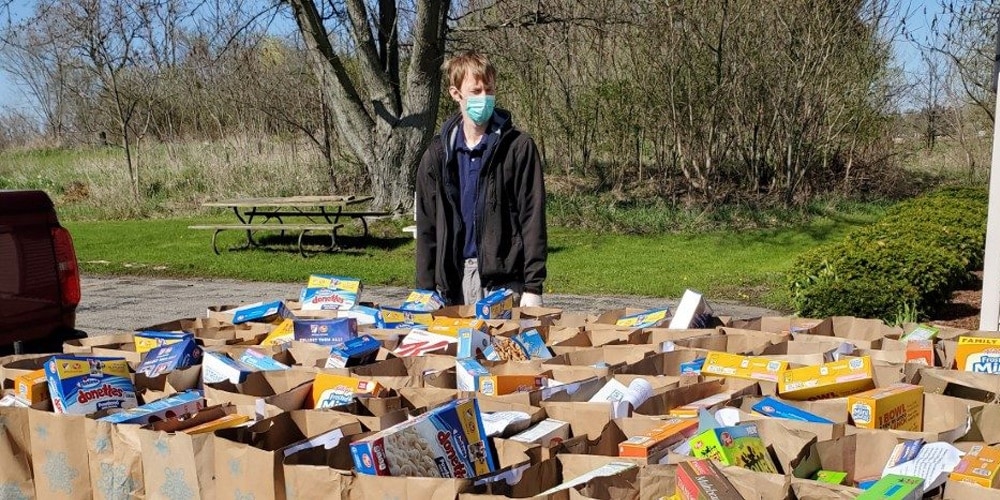 In March 2020, when Janet Allen, director of the Adventist Community Services Center in Jackson, Michigan, United States, realized she would need to shut the doors of the center because of the COVID-19 pandemic, she felt conflicted and worried.

Most of her staff were over the age of 50. There were great needs in the community. Yet she knew she needed to keep her staff safe — as well as the clients they served.

Janet recalled, “I talked to Pastor Raymond Torres [pastor of the Jackson Seventh-day Adventist Church], and he suggested we begin praying and seeking God’s guidance.” The church elders also began praying. In the meantime, Janet watched what other Community Services Center directors were doing, using the drive-by food distribution method.

Miraculously, God began opening doors for serving those in need in the Jackson community. Someone at a food bank in Battle Creek called Janet and offered distribution guidelines plus food at a significantly reduced price. At the time, she had little more than US$900 in the client food account. Janet met with her staff and devised a plan that the center would open to the public as a drive-through food distribution location.

When the word went out that volunteers were needed, several young and energetic members of the Jackson congregation offered to help. A total of 25 people (young and older) showed up for the first drive-through food pantry on May 2, 2020. The drive-through lasted for 24 weeks, and an average of 75 families were served weekly.

Janet and her helpers prayed again for funds, as their money had run out. Again, God worked. The center applied for and was awarded a federal government Emerging Food and Shelter Program grant for US$2,418. The Michigan Conference of Seventh-day Adventists gave a total of US$4,109. The center also received food donations from the Jackson Summit Seventh-day Adventist Church. A “Because It Matters” program in Jackson County donated food. Miraculously, many individuals and churches of other faiths in the county sent money — just out of the blue. When the drive-through program ended on September 29, 2020, a total of US$44,725 worth of food (a semi-truck load) had been given out.

The bags of food were packed each week by a group of volunteers. They placed health information materials in the bags, such as “How to Improve Your Immune System” and COVID-19 guidance tracts.

Each person coming through the drive-through was asked if there was something specific they would like to have the team pray for. Everyone was assured they were all prayed for each week. A few very stressed-out folks, for one reason or another, wanted prayer at that moment. Subsequently, volunteers heard about answered prayers.

The volunteers learned there were very caring neighbors among those going through the long line of cars each Tuesday. One week there were more than 80 cars in line. One woman had been cooking for two elderly shut-ins, and because she had been using her credit card to pay for food (since her employer had reduced her work hours), she asked if she could receive food. She later brought pictures of the people she was ministering to.

One family that received food began attending church. Church members who shared what the Jackson church was doing were excited to see their neighbors and friends affirming them in this ministry.

“My faith was very increased,” Allen said. “It was amazing what God did and how He provided when we stepped out in faith.”