The Spark that Became a GLOW 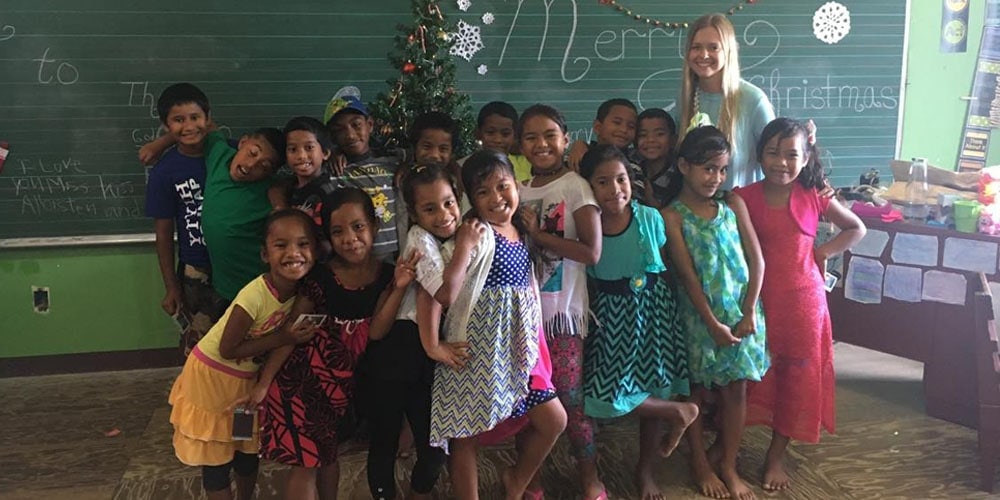 The Marshall Islands in the central Pacific Ocean got a little brighter this summer with the arrival of the first Marshallese-language Giving Light to Our World (GLOW) tract. These pocket-sized pamphletsattract readers by offering information on relevant topics like health, relationships, and biblical truths. This tract is the first one published in the local island language.

It all started with a missionary named Elisa. A few years ago, Elisa was searching for God’s plan in her life when a friend suggested she become a missionary teacher. She could have chosen any tropical setting, but she felt called to go to the congested island of Ebeye in the Marshall Islands. Her love for children led her to the pre-kindergarten/kindergarten teacher position at Ebeye Seventh-day Adventist School and to serve again the following year as the second-grade teacher.

When Elisa visited her students’ homes to meet their families, it opened her eyes to the environmental and emotional challenges that many of them face. This understanding deepened her desire to share Jesus with her students during their hours at Ebeye Seventh-day Adventist School.

Elisa described the work on Ebeye to her mother, Desirée, who worked at the GLOW Literature ministry in central California, United States. Desirée mailed tracts, which were readily available in English, to Ebeye, but she wondered: Could we get the tracts to the Marshallese in their own language?

Inspired by her daughter’s passion for reaching the Marshallese people, Desirée approached the then-principal of Ebeye school, Raian Villacruel, with the idea. Her excitement grew as it merged with Principal Villacruel's own dream to produce Christian literature in the Marshallese language.

After much discussion and prayer, Principal Villacruel and local church pastor Rene Suhot chose “Why I Go to Church on Saturday” as the first GLOW tract to be translated. About 97 percent of the Marshallese population is Christian, but less than 1 percent is Adventist. This imparts an important evangelism work for missionaries who volunteer at the three Adventist schools in addition to the churches in the Marshall Islands.

The biggest task was finding a translator. The long road was blazed by prayer, but after many months of searching, they finally found help. Kamlitha Bulles, a member of the Ebeye Adventist church, happened to be visiting Texas in the United States at the same time as Villacruel, and she agreed to begin the translation. Another local teacher in Majuro, Darrel Riklon, joined the endeavor to finish the translation work.

The completed transcript was delivered to Desirée, who had, in the meantime, raised the entire cost of the printing herself. What began with an evangelism offering of US$600 grew to almost US$2,000 in a little over a year through her faithful personal savings. Finally, in July 2021, the 23,900 GLOW tracts in Marshallese reached the capital city of Majuro and the tiny island of Ebeye.

Desirée said, “It is my prayer that many will be led to the complete, loving truth of the Lord. This tract is in honor of the Lord, as my daughter Elisa listened to His calling to her heart for mission. I pray that her story can be retold to encourage others to leave all and follow the Lord. May it be like the widow's mite, where she gave all, and God multiplied throughout all time.”

And multiplied it has. Selvin Intong and the youth on Majuro distributed the tracts as they invited households in their community to their Vacation Bible School. Alex Riano shared the tract with the king of Kwajalein when he visited his home this summer. “Irooj” (“King”) Michael Kabua translated the tract back into English to Riano and was delighted to discover that Saturday is the Sabbath day!

On Ebeye, church members are distributing the GLOW tracts among their neighbors at home and colleagues at work. Bulles, now back on Ebeye, said, “When I return to Texas next month, I will distribute them to all the Marshallese there. I will try my best so that all the Marshallese people will read them.”

Though this project took several years to complete, it began in the heart of one missionary. Elisa’s motivation was no less than love: “No matter where I go or what I do, I have this never-ending desire to help, heal, love, and give of my time and service to those in need. This is where my passion and heart lie.”

The original version of this story was posted on the Guam-Micronesia Mission news and stories site.