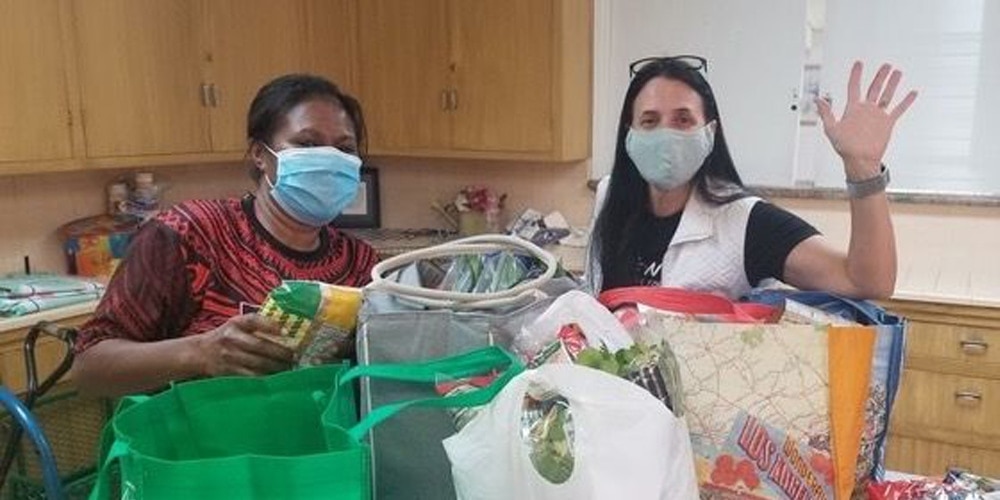 Matongo is among roughly 15 or so La Sierra students who arrive to choose from bags of rice and beans, vegetables, fruit, pasta, cereal, canned goods, and other foods each week. The food pantry, which also provides toiletry items, is organized by the university’s Office of International Student Services, or OISS. It is a donor-supported outreach that has grown substantially since its inception in 2010 with the arrival of OISS director Heidi Weiss-Krumm. For students like Matongo, it offers a safety net from a fall into devastating choices between proper nutrition or necessary textbooks and study resources.

“To be honest, I think I would have to sacrifice some textbooks to try to minimize, but I’ll still try to minimize my food intake because I already do that. I’d have to budget,” Matongo said, noting the cost of one textbook is US$150. “Most of us who stayed in [the residence hall] ended up having to go to the food pantry, which saved us a lot. Most of the girls were in need.”

Prior to the onslaught of COVID-19, a significant number of college students in the United States already had to shoulder those difficult choices — buy textbooks or buy food. Then the pandemic, with its accompanying widespread and sudden economic devastation, substantially worsened these vulnerabilities, and more so for underrepresented groups, research shows.

The OISS food program, which Weiss-Krumm calls her department’s ministry, strives to fill the gap for La Sierra’s students in need, whether they are from the U.S. or other countries. She and Jonathan Finau, OISS Designated Signing Officer for immigration matters, pool financial donations from family members, friends, the OISS office budget, and their own pockets, which Weiss-Krumm uses to buy groceries at discounted rates. Purchased goods are supplemented with contributions of citrus fruit, bread, dairy products, and other foods from individuals, including La Sierra University Church members, non-profits, and government programs.

Generous contributors to the student food ministry have included the late Gary Stanhiser, a long-time advocate of missions and humanitarian outreach, who frequently delivered truckloads of oranges to the international students’ office, and whose wife, Ruth, is a La Sierra alumnus. Another donor is Debbie Banks Austin, a member of the Mt. Rubidoux Seventh-day Adventist Church, who in 2019 began donating large bags of leftover bread from multiple sources.

When Most Students Left

As the pandemic swept across the state and nation at the end of last year’s winter season, educational institutions were forced to close their campuses and move operations online, including La Sierra University. This meant the sudden closure of the OISS food pantry in the Administration Building. Most of La Sierra’s students went home to pursue their studies online. Still, a few international students continued living in La Sierra’s dorms, which were reconfigured under health and safety protocols, or in off-campus housing.

The day before the campus closure on March 16, 2020, Weiss-Krumm boxed up all the food supplies in the office — chips, snacks, yogurt, fruit, and other items — and distributed the food to the remaining dorm students. “COVID changed the whole thing,” Weiss-Krumm said.

With the OISS food pantry temporarily shuttered and the need increasing, the university’s Division of Student Life organized an emergency response initiative called La Sierra Cares in April, in partnership with the La Sierra University Church and assisted by student leaders from La Sierra’s missions and outreach program. The team distributed food and supplies each Wednesday in a drive-through operation set up in the Sierra Vista Chapel parking lot for students and staff who enrolled in the program. The emergency outreach continued through the summer, supported by a significant donation and with the help of the La Sierra University Church food pantry.

Students are allowed into the Sierra Vista Chapel kitchen two at a time in keeping with physical distancing protocol to shop for available food and supplies. “The students are so good about sharing and not taking if they don’t need it,” Weiss-Krumm noted.

Last year rained crises upon Matongo’s family. Her parents in South Africa had operated a successful event management company before COVID-19 brought business to an abrupt halt. Events were canceled, but vendors under contract with the company still had to be paid. Matongo didn’t want to add to her family’s burdens by asking for money to be sent to her in the U.S.

“I know they have their own expenses, things they need, so I try as much as I can not to bother them,” she commented, adding that she is applying through the U.S. Citizenship and Immigration Services for an emergency work permit that would allow her to get a job off campus.

Meanwhile, she and her international dormmates in the women’s residence hall who hail from such countries as Korea, China, Mexico, and Spain, have been enjoying newfound friendships formed over the past months as they have had only each other’s company.

With the intense stresses of the past year beginning to fall away, Matongo casts a hopeful eye on the future. “I actually believe this year is going to be better for us because I trust that God will make this year better than last year,” she said.

In an email interview, Finau said he strives to be the voice for the students in connecting them with the food they need. “That moment feels like a small burden is lifted off my shoulder because I don’t have to worry that students will starve,” he said. “I used to be in their shoes, struggling to pay for my tuition and having limited access to food. The only difference is that I asked around for help, and I have noticed that students are shy to ask nowadays.”

For Weiss-Krumm, the food pantry is a labor of love and an opportunity to pay it forward.

“These are my kids. These are the ones we’re going to help,” she said. “I’ve been blessed way more [than I’ve given].”