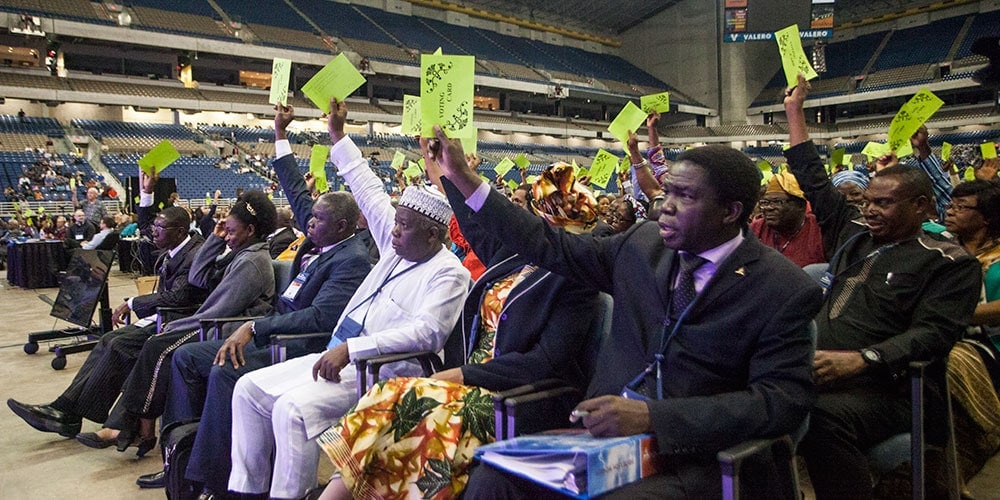 I like numbers, because numbers tell us stories. They don’t tell us all the story, but they do tell us a story. Here are some of the stories I found in the delegate data numbers. Some of these stories may surprise you.

The “oldest” delegate group at the 60th General Conference Session of Seventh-day Adventists is North America, with 47 percent of its delegation 60 or older (38 percent aged 60-69 and 9 percent 70 and older, respectively). From a division that consistently bugles the dangers of an aging church and regularly sounds the alarm “we are losing our young people!” this seems surprising. That is, until we pause to remember this number may not reflect the hearts of the division but rather the structure and policy of our church. Current structure dictates that the majority of church delegates are also officers at some level of the denomination—conference, union, division, or medical or educational institutions. In a division where people live longer and work longer, individuals get into these positions and remain there—thus increasing the age of our delegation. Also, this is a reflection of the church in North America, where the median age of membership is 51 years old. By contrast, the average age of membership in several other divisions around the world is reported to be in the mid-30s.

Why do these two divisions interest me? These divisions were the first and third fastest growing divisions of the world church over the last several years. Is there any correlation? I’ll let you decide.

Numbers tell stories, but only part of the story. The full story is found only in the heart of each individual delegate, no matter what age or gender.

Another story I see is that in a world church that has more women than men within the membership ranks, men still lead the way in decision making. The 60th Session of the General Conference has 1,891 male delegates and 380 female delegates from the various world divisions. No division, even those that are the greatest proponents for women in paid ministry positions, has less than 72 percent male delegates.

In the spirit of full transparency, and so that I will not be accused of hiding information to protect my bias, our fastest growing division—South America—not only is one of the youngest by delegation statistics but also has the fewest women delegates, at just 10 percent. Again I’ll let you decide whether there is any meaning to this statistic.

Numbers tell stories, but only part of the story. The full story is found only in the heart of each individual delegate, no matter what age or gender.

The full story of this session will not be truly found in the demographics of this delegation but rather to the degree each delegate allows the Holy Spirit to guide and direct their thoughts as they make decisions that will lead this church either closer to or further away from the kingdom of God during the next quinquennium.

san-antonio-360-voices-from-the-alamodome
​The Journey Must Go On!