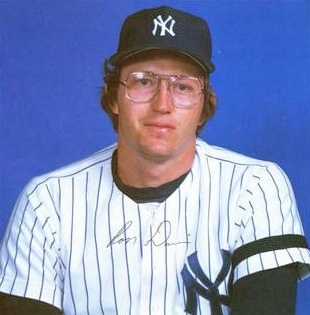 During the magical summers of my childhood, I loved listening to Minnesota Twins baseball games on the radio. When the Twins played a day game, I’d sync my mowing schedule just right. When they played at night, I’d lie up in our loft with my transistor radio pressed tightly to my ear, the soothing baritones of Joe Angel and Herb Carneal describing every curveball in the dirt, every base runner breaking for second—a story better heard than seen. (In her childhood memoir Space, Jesse Lee Kercheval tells about watching the moon landing on TV. The picture was so grainy that she finally walked outside to her dad’s convertible, turned on the radio, and sat on the hood. She said she could “see” it better that way.)

The Twins were never very good during those years. We had an erratic “relief pitcher” named Ron Davis, who brought us anything but relief.

Davis’s job was simply to come in at game’s end, throw a few decent pitches, preserve the lead, and “save the game.” But often, Davis did the exact opposite: he blew the game. Acquired in a trade with the New York Yankees (who always ripped us off), Davis threw the ball hard; but it was anyone’s guess where it was going. I recently came across an old picture of the long-legged, bespectacled Ron Davis in action. The caption read: “Ron Davis needed those glasses to see how far opposing hitters hit home runs against him.”

In 1984, Davis tied the record for blown saves in a single season with 14. That meant that 14 times Ron Davis had a chance to finish the game, and 14 times he blew it. Even today, no one has blown that many chances in one season.

In one memorable game, the Twins had taken a 10-0 lead over the Cleveland Indians. But the Indians mounted a comeback, chipping away at our lead until it was 10-8 in the eighth inning. Predictably, the Twins decided to bring in their “closer,” Ron Davis, who promptly threw wild pitch after wild pitch, walked three batters, and gave up the game-winning hit. We lost 11-10.

After one particularly bad road trip during which Davis had blown several games, the beleaguered Twins were returning home. Everyone wondered how the fans would react the next time Ron Davis was summoned from the bullpen. A couple days later, the Twins led Milwaukee 3-2 in the ninth inning, with two outs and the tying run on third base. Davis got the call.

Listening from my bed, I braced myself for the boos and jeers. But a funny thing happened as Davis loped toward the pitching mound: a group of fans began cheering for him, encouraging him! More fans joined in. The announcers were stunned. The fans were actually cheering for this loser? Before long the entire crowd was on its feet, chanting “RD! RD! RD!”

Feeding off their energy, Davis grabbed the baseball. One wild pitch would blow yet another game.

Ron Davis goes into his windup and delivers. Strrrriiiike one! Fastball right down the middle.

The Twins players mobbed Davis on the mound. I ran downstairs to tell Dad.

Why is it that we like underdog stories so much? In which the loser finally wins? Is it because deep in our hearts we all relate to losing—to hoping that we still have some value? That our day will finally come? That someone out there not only loves us, but needs us?

The beauty of the call of Christ isn’t only that He says, “I love you”; it’s that He says, “I need you.” With His call to discipleship, He dignifies us, gives us worth. In the same way, look for those around you who may feel washed up, beaten down, cast aside. Watch their eyes brighten with an encouraging word. Watch the difference it makes.

Andy Nash is a pastor and author in Denver, Colorado