Religion in a Slice of Tahini Bread 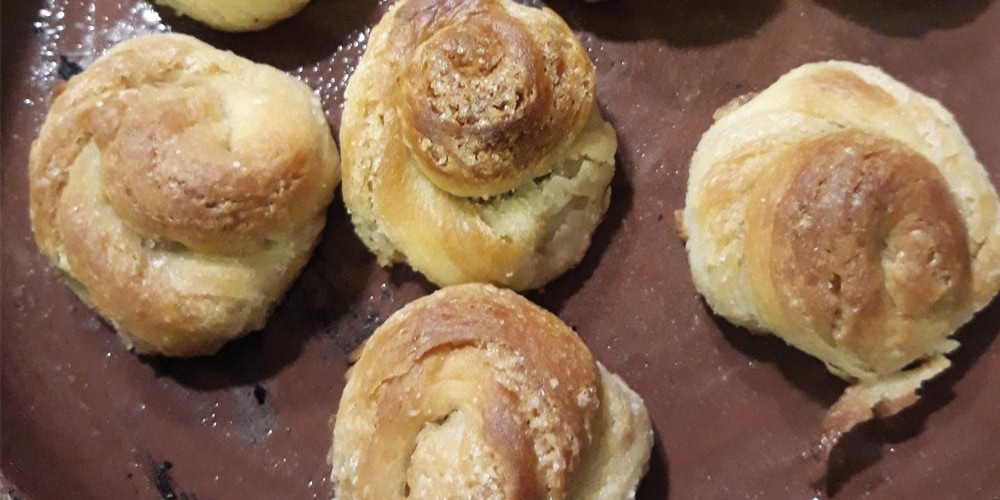 By: Maria Shajiei, for Adventist Mission

“Are you a believer?” the man asked. My husband nodded.

The man was folding individual-sized pizza boxes for the next order, his white apron matching his neatly cropped salt-and-pepper hair. “I used to go to church, but I don't anymore. Not for twenty, twenty-two years now. I'm a believer too.”

Minutes earlier, my husband and I had been walking through the Armenian section of town looking for a curtain shop. We were fixing up our first home and wanted to find the perfect curtains that matched our gray sofa set. After perusing some reasonable options, we started to walk back to our car. Then I remembered that I wanted tahini bread.

It was a little after 2:00 p.m., and I wasn’t sure whether the bakery I occasionally visited was still open, but I persuaded my husband to turn down a side road and check. It was open, but no tahini bread sat on the display shelf, so I asked the owner whether he had any.

“I don’t have any tahini bread, but I can make some for you,” Harry* replied with a friendly smile. “You look familiar. Have you been here before?”

I laughed. “Yes, I come here and order tahini bread to bring to the U.S.” I take tahini bread when I visit my mom and brother every summer.

I decided to order five loaves. Harry invited us to wait on the barstools by the window while he prepared them. About ten minutes later, our order was ready.

As I rummaged around in my purse for change, he exchanged pleasantries with us. He first directed his attention to me as he spoke about the current economic challenges the country was facing.

“You’re still here! Why?” he queried, remarking that anywhere else seemed like a better place to be right now.

“My husband is studying, so we will be here for a few more years,” I answered.

Harry turned to my husband. “What are you studying?”

“So you are a believer then. I thought there was something a bit different about you.” Harry looked at us thoughtfully. He turned to me again. “I noticed it first in you, because I've seen you several times already, but I also saw it in your husband.”

The conversation then shifted to religious things. My husband, who has a natural gift for connecting with strangers (unlike me), encouraged Harry as they spoke about what it means to be a true believer and the importance of God’s call to love others.

Harry and his wife had married young and moved to Scandinavia, where, after they had three children together, she left him for another man. She had been a Christian also, and Harry determined that if this is what Christianity was all about, he didn't want anything to do with it. My husband reminded him that we are all sinners, and we all make mistakes. Harry agreed but was adamant about his decision to leave the church. He did, however, reiterate how he was always happy when he heard that someone was a believer. My husband invited him to church, but Harry declined, saying church wasn't for him anymore.

We left the bakery in silence. I had tears in my eyes as I realized how God had orchestrated a craving for a sweet treat into a divine encounter. I had met Harry several times before, but this was the first time he had spoken about religious things. Though Harry had become jaded with the hypocrisy of people and religion, his heart still longed for God. He shared that he was tired of this world, that he believed we are living in the end times, and that he was waiting for Jesus to come back soon.

I used to be a shy person who never spoke to strangers. Now I’m thankful for a husband who has the gift of talking to others and fearlessly sharing his faith. Please pray that we can be bold for God as we speak with those we meet and seek God’s help to live our lives in harmony with Bible truth. Pray that we can keep a spiritual connection open with Harry as we continue to visit him at his bakery. As Jesus said, “I have other sheep, too, that are not in this sheepfold. I must bring them also. They will listen to my voice, and there will be one flock with one shepherd” (John 10:16, NLT).