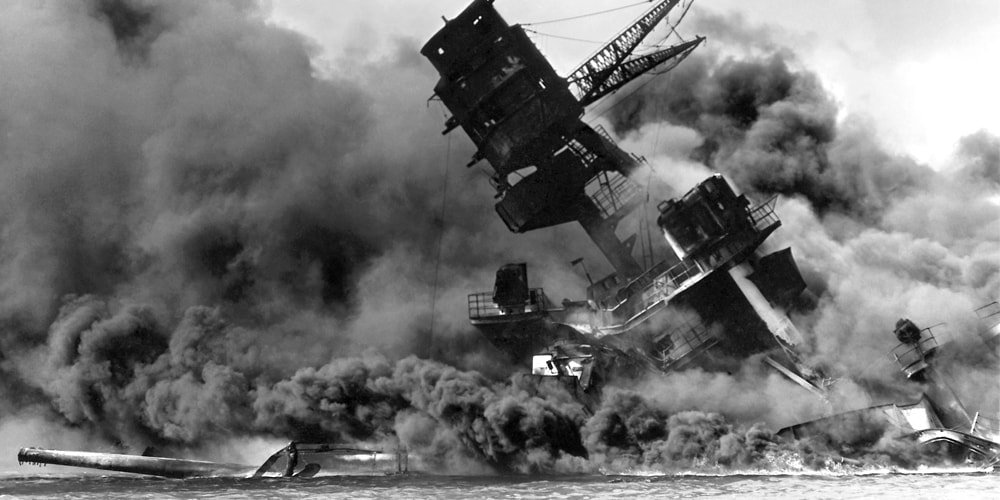 This article first appeared in the March 12, 1942, issue of the Adventist Review. It reports on how Adventists fared during and after the bombing of Pearl Harbor on December 7, 1941. We are republishing it to commemorate this historic event. The article offers a unique perspective of the bombing of Pearl Harbor and its effect on individual Adventists. It also reflects the tone and language of its time.—Editors.

“When they shall say, Peace and safety; then sudden destruction cometh upon them” (1 Thess. 5:3, KJV). This forecast of the apostle Paul met an unusual, literal fulfillment December 7 in the now historic attack on Pearl Harbor, America's largest Pacific naval base. It is true that there was talk of war prior to the bombing, but the incident itself came to all of us as an astonishing surprise. No one in Hawaii felt that war would come so soon. But the unexpected planes of the enemy appeared out of the blue and blasted our ships in the harbor. Antiaircraft units and fighter planes returned the fire, but not before the damage so publicized in the press was accomplished. The lesson of Scripture—“In such an hour as ye think not” (Matt. 24:44, KJV)—was made painfully real to hundreds of sufferers. But in the midst of all the bombardment, and in the days that followed, our God, who neither slumbers nor sleeps, was at work for His people. The following stories of divine providences may interest the readers of the Review.

Nearly 30 of our faithful men and women [Seventh-day Adventists] are working in the Pearl Harbor navy yard. Many of them were on their jobs under fire on the morning of December 7. It is thrilling to hear them tell their stories of deliverance. God mercifully saved one brother who was working on a dry dock from being strafed with machine-gun bullets. A chief petty officer interested in our message was on deck aboard one of the damaged ships when it was struck by a torpedo. He was thrown three or four feet into the air by the blast but was entirely unharmed. On reaching the beach safely, he told us that he felt that his life had been spared by the direct intervening hand of God.

In Honolulu proper a bomb struck on a street corner where five minutes before one of our young men had passed by. The exploding charge killed one pedestrian. Surely God saved this young man from a horrible death. A sister whose husband is a Navy man barely escaped death when a bomb struck squarely in the street outside her home. Four of her neighbors were struck and killed instantly. The shrapnel buzzed through her frail frame house, across her bedroom, and over her head. An ugly bomb fragment landed in the baby's crib nearby, but the infant was not there, having been removed by the mother for feeding only a few moments before. Our sister had been reading her Bible, and the Good Book was open at the place where it says, “In such an hour as ye think not.” This woman was baptized only a few months ago and attributes her escape from an untimely death to her stand for God and the truth.

We have a radio broadcast for half an hour on Sunday mornings that we call The Voice of Hope. Providentially, this program came on while the bombings were still in progress. It was the last program on the air before broadcasts were temporarily suspended because of the emergency. When I called at the studio for the remote-control equipment to take out to the church, where our program originated, the technicians were, of course, excited and worried. A bomb had made a direct hit on a truck parked by the station and set it afire. This plane was still hovering over the city, seeking a target. When I asked one of the announcers, “Will we be on the air this morning?” he replied, “I don't know who could give a better broadcast just now than the Seventh-day Adventists.” That made us happy. We were glad that Adventists are recognized as a people of the times, knowing the times.

On that particular day every citizen sat glued to his radio, awaiting orders and news of the attack from the office of the military governor. When we came on the air, we probably had the biggest listening audience in our 11 years of radio broadcasting from this station. Our subject for the morning was changed to suit the occasion. We were interrupted five times during the half-hour for announcements, but we believe that more friends were made for the truth by that program than by any that we had ever produced before. How true it is that God moves in mysterious ways His wonders to perform.

Another experience that brought great cheer to us occurred about a week after the Sunday of the bombing. It reveals how the Lord can bring light out of darkness. The president’s order for a seven-day week for work brought no little perplexity to our faithful Sabbathkeepers who are employed at the Pearl Harbor Navy yard. But up until the seventh of December they had been permitted the weekly Sabbath rest. An order was issued immediately calling all men to the yard seven days a week. The following Saturday, however, nearly all our men failed to turn out for work. Our men were then served written notices to appear before a naval officer to give an explanation. This they did without any counsel from us, acting out of a good conscience, which they were determined to preserve inviolate. They told the official of their respect for the commandment that forbade them to work on the Sabbath day except where they could directly save life and relieve human suffering; but in spite of their religious convictions, they were ordered to appear at the yard the following Saturday.

A number of the brethren notified us of their plight and asked if we might not help them. Elder George E. Taylor, the mission superintendent, and I then made a personal visit to the admiral in charge of the naval district, his chief of staff, and the captain of the yard. The admiral knew of our people and had been impressed not only by their sincere religious convictions but also by their patriotism. We were happy to see that he recognized and did not question the loyalty of our people. When we explained to these gentlemen the basis for the failure of our church members to show up for work on Saturday, they reminded us that we are in an unprecedented emergency. They felt that God would forgive our men for the sin of breaking the Sabbath in order to help do their bit to save the nation in the crisis. “Please tell them that they must show up for work seven days a week like everyone else,” the admiral requested us.

It was a tense moment. Elder Taylor told this gentleman that he would not be able conscientiously to counsel them to work on the Sabbath, but that he would see them and tell them that the admiral had ordered them all to work seven days a week, and that they must make their own decision in the light of their own convictions. The admiral seemed satisfied with this, and we left. But no apparent success had been achieved by our visit. The only bright feature was the fact that these men of ours were working for the American government, which guaranteed to all its citizens the right to worship God according to the dictates of conscience.

We prayed about the matter very earnestly, and several days later we were overjoyed to learn that an order had been issued at the yard to all shop superintendents, instructing them to take no disciplinary action against Adventists who did not appear for work on Saturday. It was equivalent to an order granting all our men the full day off each week for religious reasons. We thank God for this providence and also for our government officials who still regard the sacred rights of free Americans.

Many other instances might b
e told of God's grace at work. Our people here are faithful and sincere. The war has awakened a keen interest in our message, and a number have recently been baptized. We expect that time and circumstances will give our omnipotent God further opportunity to work for His needy people here in Hawaii. Pray that we may have grace to witness for Him in the uncertain future.

Dwight Arthur Delafield and his wife, Evelyn, were serving in Hawaii at the time this article was written. Delafield was a pastor and the radio host for The Voice of Hope. He later served as an associate editor for what is now named the Adventist Review, and also as associate secretary and a lifetime trustee of the Ellen G. White Estate.