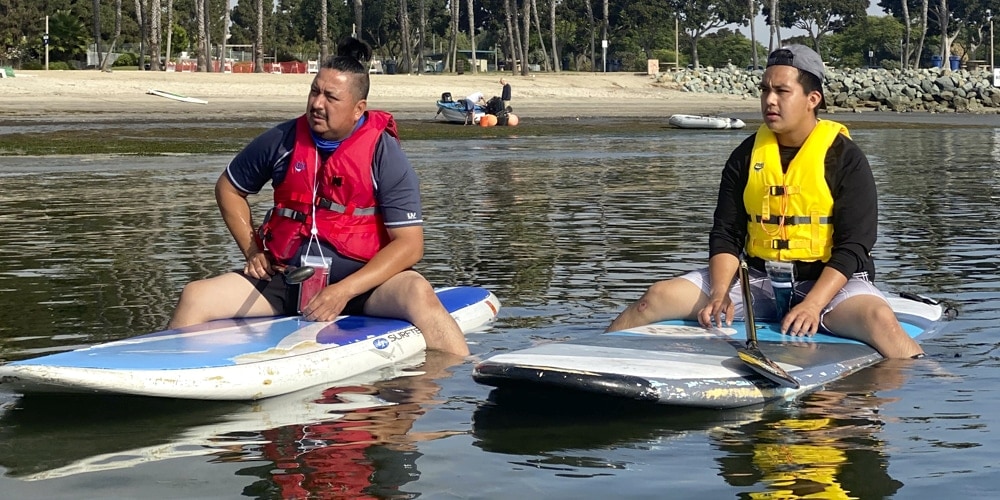 South Bay Seventh-day Adventist Church lead pastor Meshach Soli ministers to his flock in a cool place. San Diego, California, is known for its stellar weather, natural beauty, and, of course, easy access to that Southern California lifestyle the rest of us envy, especially during the winter. With proximity to the ocean, Pastor Meshach and his wife, Linda, enjoy taking their stand-up paddleboards (SUP) out on the quiet waters of Coronado or other spots for exercise, fresh air, and the tranquility water sports bring.

The Solis paddleboard as their schedules allow, and soon Pastor Meshach invited a couple of fellow pastors to join in. They loved it so much that they invested in boards of their own.

“So, we would go out and just paddle. And they ended up investing in their own boards, and it became one of those things where we said, ‘Hey, why don’t we invite our associates? Why don’t we invite some of our youth pastors out?’”

Every new pastor who has come to San Diego in the past two years has been invited to the paddleboard, or “pastor board,” meetings, says Pastor Meshach.

A Board Meeting You Want to Attend

What started as a recreational outlet for fellow pastors soon proved to be much more important.

“Speaking of mental health, and especially during the pandemic, it turned into something where we were able to kind of decompress and talk about life in general. Sometimes when we go out we won’t even say anything about ministry. We talk about how everyone is doing with the pandemic. What are some of the new things that you guys are incorporating in your churches? And then it just developed into a space where we’ve found a level of accountability. But also, it’s just been a great support for different pastors to come out.”

Current news stories have pointed to a disturbing trend of clergy struggling with mental health challenges, sometimes to the point of suicide. “In the past couple of years, we’ve seen pastors committing suicide, pastors just leaving ministry altogether because of mental health. It was a reality check,” says Pastor Meshach.

In conference pastors’ meetings, especially of late, mental health has been a big topic. When the question was raised of what colleagues were doing to take care of their mental health, the paddleboarding pastors of the group had an answer: their early Friday morning “board meetings.”

“But the sad reality is most of the people in the conference group had nothing. They had no outlet. They had no other person [to confide in] where they could find a safe space to open up. So, we were saying, ‘We’re on to something here,’” Pastor Meshach says.

SUP has an easy learning curve compared to other water sports. One can do it sitting, kneeling, or standing up, which makes it accessible to people with different levels of skill and comfort. That combined with the therapeutic effects of being on or near water has made this type of pastoral gathering one-of-a-kind.

“It’s developed into something really big,” says Pastor Meshach. “I have deacons or other leaders in my church that would say, ‘Pastor, I need to talk to you.’ So, I say, ‘Have you guys paddleboarded before? Meet me at Coronado Bay.’ And then we will jump on the board and just paddle out. I’ve used that space also for counseling, lending an ear. And I tell you, people coming back from being in the water, in the ocean with paddling and being able to express their feelings, they come back revived.”

A New Ministry Is Born

While Pastor Meshach’s paddleboards have become a part of a much-needed and rewarding way of networking and supporting fellow church leaders, many others within the congregational families can also benefit.

“The Pacific Union has an endowment fund for creative evangelism. And so they pick at least four churches in our conference to fund for the year. We turned in an application for a paddleboard ministry so that the union would fund us to help us buy brand-new paddleboards, life jackets, things like that. And we were one of the four churches that got the grant,” Pastor Meshach says. The South Bay church is in the process of getting all its gear together ahead of a June 2021 launch. The idea is to open the activity up to anyone interested in coming out to learn to paddle, enjoy time together with fresh air and exercise, and create community.”

The paddleboard ministry is not limited just to church members. Pastor Meshach says they’d love for anyone at the water to get involved as it is a great way to meet others and create relationships outside of a church setting.

“So, it’s set up to be from Sunday morning from 8:00 to 12:00. We’ll register people and pull the trailer out there to the bay. I’m sure we’ll run into people that are at the bay that have no idea who we are. So, it would be great to say, ‘Hey, we’re offering free lessons. Do you want to get your family on?’ The whole idea is just about building a connection. Just making ourselves available, exposing our ministry and our church in an area where they probably have never heard of us before.”

Pasto Meshach is reminded of a great quote: “If your difference doesn’t make a difference, you’re not different. You’re weird.” Getting pastors, families, and community members on a paddleboard to address a variety of mental, physical, social, and spiritual needs can only make a difference that matters.

Wilona Karimabadi is an assistant editor for Adventist Review and Adventist World magazines.