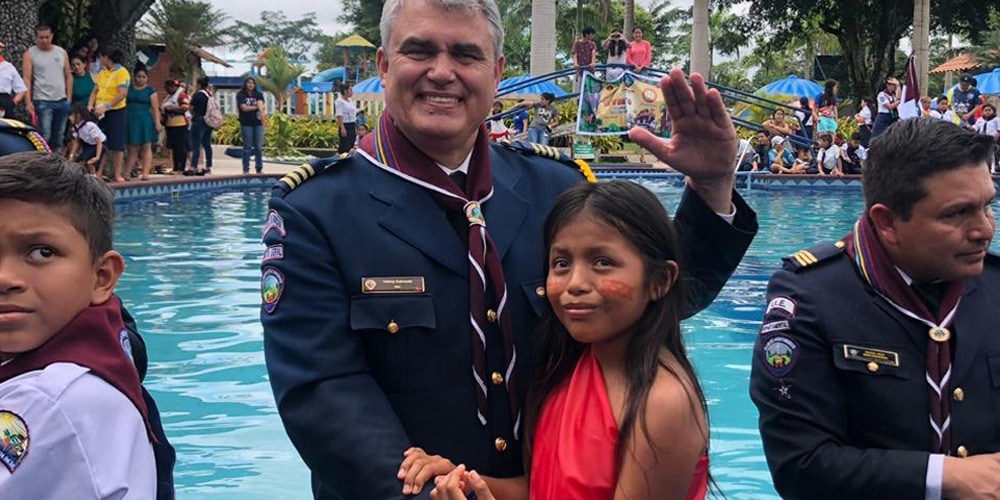 The Seventh-day Adventist Church in Ecuador hosted one of the biggest events ever held for children when 3,500 people pitched their tents for the 3rd National Camporee, dubbed “A Flood of Adventures,” in Santo Domingo, Ecuador, November 1-3, 2019.

One of the young participants was eight-year-old Alexa Chimkin, from the Shuar ethnic group. The girl, whose last name means “little bird” in her native language, was one of the many drawn by the message of the Adventurers Club.

Chimkin is a member of the Uchi Awakmaainai Club. “Uchi Awakmaainai” is a phrase in the Quechua language that means “winning children.” Chimkin is a native of a town called Taisha in Ecuador’s Amazon region, 77 miles (124 kilometers) from Macas, in Morona Santiago. Until a couple of years ago, Taisha could only be reached by light aircraft due to the lack of rural roads, but that has now changed.

South American Division (SAD) Pathfinders and Adventurers director Udolcy Zukowski attended the camporee and baptized Chimkin. Zukowski said that the Pathfinder clubs’ outreach projects have reached many tribes, even in remote locations across the country, including Chimkin’s hometown.

“Residents in the area where the girl lives often spend two hours driving and then four hours walking in the jungle to reach her tribe,” he explained.

Thanks to the commitment of young people serving in the Caleb Mission project, in July 2019 Pathfinders and Adventurers clubs were launched in that remote area. This follows a commitment by mission groups to reach young people and children as they try to accomplish one of the youth ministry goals in Ecuador, which is to have “a club in each church.”

Annabell Moran, wife of the missionary in charge of the outreach initiative in that area, became director of the new club. The group began to meet every Saturday (Sabbath) to learn songs and the Pathfinders’ motto and pledge, and to play biblical games.

“I showed them several videos of what camporees were like, and they loved it,” Moran said.

Nuri Shiki, who attended the club meetings from the beginning, told her friend, Chimkin, about the activities they did every Saturday afternoon, and about their plans to go camping. Chimkin said she wanted to go, and Shiki began to stop by Chimkin’s home every Saturday, and the girls went to the club meeting together. They also study the Bible with Moran.

Chimkin began attending not only the afternoon meetings but also morning worship service. Her mother already knew about God but was not attending church. Seeing her daughter so committed, however, made her think, and they began to participate in the service together.

Chimkin and her friends traveled for 18 hours to Santo Domingo, with high expectations about the prospect of taking part in the event. Their new club commitment before and during the event was such that they won the Newcomer Award. They collected their prize wearing typical costumes of their tribe.

Church leaders said that the event touched many lives, including the 105 young people who surrendered their lives to God and were baptized. One of them was Chimkin, who committed to connecting with Jesus every day together with her family.

Now Chimkin and her club say they want to keep working to share the message of Jesus in Taisha, according to event leaders.

“Club members from Taisha have already demonstrated perseverance and courage,” leaders said. “Now they dream of growing their club and congregation with their example.”