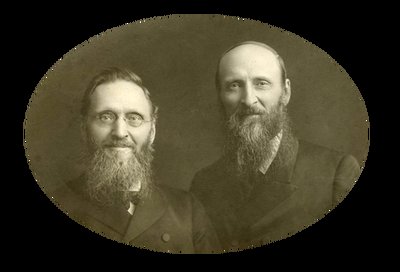 Ted N.C. Wilson,
president of the Adventist world church, challenged people attending the 150th
anniversary of the oldest Adventist church in New England not to have a
“grasshopper complex” but gladly share their identities as Seventh-day
Adventists in spreading a “good report” about Jesus’ soon coming.

Wilson spoke on
Sabbath, Oct.
18, at the Bordoville Seventh-day Adventist
Church, a simple, white building in West Enosburg, Vermont, that was built in
1864 by the French-Canadian brothers Augustin C. and Daniel T. Bourdeau.

Church co-founder
Ellen G. White had visions in the church, the first to be built in New England
after the Seventh-day Adventist Church
adopted its name in 1863 and the early home of a flourishing Adventist
community.

Wilson reminded
listeners of the reports that the 12 Israelite spies brought back from Canaan
in the book of Numbers 13. Two spies spoke glowingly of a land flowing with
milk and honey, but the other 10 warned of strong giants who left them feeling “like grasshoppers in our own sight.”

He said some Adventists
might worry that it is difficult to share Jesus in New England or that the
local churches are too small to be noticed. He said people who participate in
that kind of thinking are bringing
a bad report.

“Don’t be a
grasshopper! Bring back a good report!” he said. “When someone asks what church
you belong to, don’t say, ‘Well, it’s a very small church. You probably have
never heard of it. Well, I’m a member of the … [muffled sound].’ No, look the person in the eye, smile nicely and
say with anti-grasshopper feelings, “I’m a Seventh-day Adventist, and let me
tell you about it!” Every time you say those words, you preach a sermon!”

Wilson previously has
noted that the name “Seventh-day Adventist” is a two-word sermon that points to the biblical Sabbath set aside by God at Creation and to Jesus’ coming.

In the sermon, he
said White herself cautioned against hiding the church’s distinctive name.
Reading from White’s book Selected
Messages, Book 2, page 384,
Wilson said: “We are Seventh-day Adventists. Are we ashamed of our name? We
answer, ‘No, no! We are not. It is the name the Lord has given us. It points
out the truth that is to be the test of the churches.’”

“Never, never be
ashamed of our name,” Wilson said. “When our church began, many names were
suggested and considered, but when the name, ‘Seventh-day Adventist’ was
discussed, God impressed church leaders that it was the best.”

Looking back at the
history of the Bordoville church, Wilson said it was important to commemorate
the 150th anniversary, just as it was vital for the Israelites to
place 12 stones in the Jordan River as a memorial to God’s leadership when they
finally reached Canaan, the Promised Land. But he also expressed a sense of
sadness about the anniversary.

“To be sure, we are
very grateful for all the diligent work that has gone into the planning of the
sesquicentennial program of today here in Bordoville, but actually, this is
kind of a sad anniversary,” he said. “We should have been home by now. The
Promised Land awaits us!”

The Bourdeau family
moved to northern Vermont to escape persecution from Catholics when they became
Baptists, and the brothers built the church on their own land. The Bordoville
church held services every Sabbath for 131 years until it was closed in
September 1995 for renovations to the rotting floor. Those renovations are
ongoing, and worship services are only held during
months with warm weather.

Although the church
is no longer formally operating, a few baptisms have taken place locally in
recent years, said Virgina Eckson, who with her husband, Erwin, organized the
anniversary event. A Bible worker visited the area for a while, resulting in
one baptism, and two more baptisms followed afterward, she said.

White visited the
church several times. During a Tuesday evening meeting in 1871, she saw in a
vision that the early Adventist members were treating her husband, James White,
with the same ill spirit that the Israelites had displayed toward Moses as they
journeyed to the Promised Land.

“In a vision
given me at Bordoville, Vermont, Dec. 10, 1871, I was shown that the position
of my husband has been a very difficult one,” White wrote
in Testimonies for the Church, Vol. 3,
page 85. ”A pressure of care and labor
has been upon him. His brethren in the ministry have not had these burdens to
bear, and they have not appreciated his labors. The constant pressure upon him
has taxed him mentally and physically. I was shown that his relation to the
people of God was similar, in some respects, to that of Moses to Israel. There
were murmurers against Moses, when in adverse circumstances, and there have
been murmurers against him.”

Denis Fortin, a
professor of theology at the Seventh-day Adventist
Theological Seminary who has researched Bordoville, said the old church would
be remembered in Adventist history as a place that offered a sanctuary to
early, scattered believers.

“With the church
building came a sense of community, and many families migrated to Bordoville or
nearby in the 1860s,” he said.

The Bordoville church
had 116 members enrolled on its books from its origins until 1868, when the
membership began slow but steady slide, according to a church history written in 1954 and today kept
at the Ellen G. White Estate.

Interestingly, Fortin
noted, White was not pleased with the growth of the Bordoville church, saying
Adventists had moved there to the detriment of the communities where they once
lived.

“In order to increase the numbers at Bordoville,
brethren have moved there, leaving the places from which they came destitute of
strength and influence to sustain meetings,” she wrote in Testimonies for the Church, Vol. 2, page 632. “This has pleased the
enemies of God and the truth. Those brethren should have remained as faithful
witnesses, their good works testifying to the genuineness of their faith by
exemplifying in their lives the purity and power of the truth. Their influence
would convict and convert, or condemn.”

But with the
reproof came deep love from White, who labored “especially
for the church,” said Augustin and Daniel Bourdeau, the brothers who built the church. The brothers, writing in the Dec. 26,
1871, issue of the Review
and Herald, the predecessor to Adventist Review, described a Sunday
afternoon when three people came to say good-bye to White at his house and
White got caught up in a vision:

“Sister White
felt the real burden of their cases, and a special yearning after them for
their salvation, and gave them rich instructions. She then kneeled down with
them and prayed for them with great earnestness, faith, and tenacity, that they
might return unto the Lord. They yielded and prayed, promising to serve the
Lord.

“The Spirit
of the Lord drew nearer and nearer. Sister White was free, and soon,
unexpectedly to all, she was in vision. She remained in this condition 15
minutes.

“The news
spread, and soon the house was crowded. Sinners trembled, believers wept, and
backsliders returned to God.

“The work was
not confined to those present, as we have since learned. Some who had remained
at home were powerfully convicted. They saw themselves as they had never done
before.

“The angel of
God was shaking the place. The shortness of time, the terrors and nearness of
coming judgments and the time of trouble, the worldly-mindedness of the church,
their lack of brotherly love, and their state of unreadiness to meet the Lord,
were strongly impressed upon the minds of all.”

Transcript of Ted N.C. Wilson's Oct. 18, 2014, sermon, "What Do These Landmark Stones Mean? Bring Back a Good Report"

A Bordoville church history written in 1954 and today kept at the Ellen G. White Estate (PDF)

Ellen White's reproof to the Bordoville church inTestimonies for the Church, Vol. 2, page 632

Augustin Bourdeau's account of Ellen White's work in Bordoville from the Dec. 26, 1871, issue of the Review and Herald (PDF, scroll down to page 6)