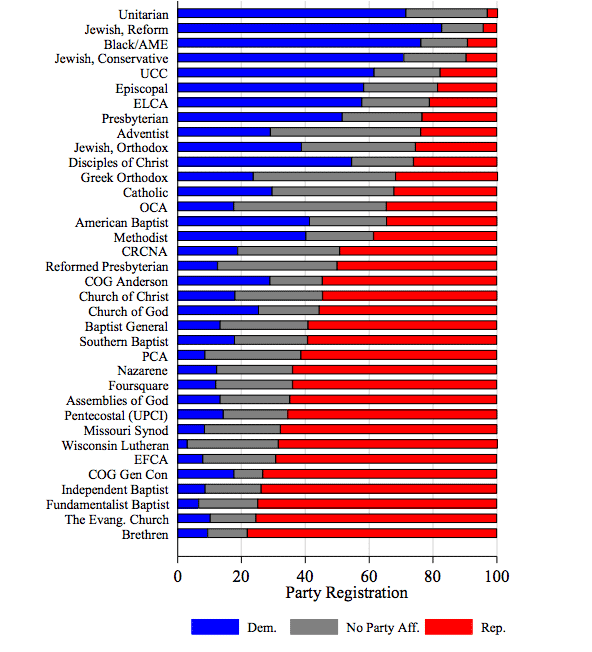 In a study released June 11, 2017, researchers from Yale and Harvard concluded that Seventh-day Adventist clergy in the United States are the most evenly divided between Democrats and Republicans when it comes to politics.

The study also found that nearly half were not registered to either party.

Based on these numbers it might be concluded that the political divide engulfing the nation may have invaded the churches, but in reality, Adventist clergy have long put politics on the backburner while they focused on the mission of the international denomination.

The researchers did not conduct a poll but instead drew inferences from a list of 180,000 clergy of many religious groups in the United States. Using methods described in the study, they found that approximately 130,000 pastors had registered to vote.

According to the study, there are about 5,330 Adventist pastors in the United States. Of these, 51% were identified with a political party and were nearly even between Democrat and Republican party affiliation. The remainder were not registered with either party.

A 2014 Pew Research study also found that the Seventh-day Adventist Church was the most racially and ethnically diverse denomination in the United States.

Last year the Adventist Church reported that as of 2015 there were 19,126,438 members of the denomination around the world, of which only 1,218,397 reside in North America. Unlike many Protestant churches, the denomination cannot be characterized as an “American” church, but rather a global church with congregations in almost every nation on earth. Andrews University in Michigan, which houses the Adventist seminary, is the 4th most diverse university in the United States and 21.3% of the students are international.

A discussion of Adventist global engagement not only involves religious ministry, but also healthcare and education, which require significant cooperation with local governments around the world. The denomination operates thousands of other institutions which it administrates including schools, colleges, universities, medical facilities, including approximately 175 hospitals and many more local clinics.

Despite its diversity, Adventists have a sense that all Adventists everywhere “are in this together.” Unlike the Catholic Church which is also global and operates thousands of institutions around the world there is no “Pope” who can make infallible declarations if necessary to keep things on track. Instead, the Adventist Church is perhaps the world’s largest representative democracy. Local congregations send representatives to conference meetings, which send representatives to union conferences, to national and international divisions, and ultimately to the General Conference sessions which elect church leadership. Every five years, the Adventist church rents out a huge stadium and associated conference centers and representatives from around the world come together to debate issues of doctrine and leadership, hear reports from world divisions, and vote on administrative and doctrinal issues.

Some of these decisions, such as a 2015 vote at the General Conference session in San Antonio, Texas, that failed to affirm the ordination of women, can be controversial, and are debated for years before and after. Despite these disagreements, it is remarkable that representatives from nations that might be at war with each other can come together as “brothers and sisters” in a common mission.

A factor keeping politics out of Adventist pulpits could also be that Adventists observe a weekly Sabbath, with most refraining from discussing politics during the 24-hour period from sundown Friday to sundown Saturday and most do not read the newspapers or watch the news during that time although many engage in social media on other topics. This means that you’re not likely to find a partisan political discussion taking place during a church service or Saturday study sessions, and pastors who want to address political issues will probably do so privately away from the pulpit on another day of the week.

While there may be tax-exemption considerations involved with taking political stands in the pulpit, Adventists understand the practical reality that a pastor in one country does not serve the global mission well by pushing politicians to take military action in another part of the world even though denominations with no international aspirations may have no qualms about this kind of engagement.

While American Adventists are patriotic, they have traditionally avoided engaging in armed conflict as combatants. Their dedication to these principles is exemplified by people who made significant sacrifices such as Congressional Medal of Honor awardee Desmond Doss and military draftees who chose to undergo chemical testing rather than take up arms in Operation Whitecoat.

Adventists have long emphasized the value of political independence and the separation of church and state. One of the Church’s founders, Ellen White, noted that while voting was important, “those who teach the Bible in our churches and our schools are not at liberty to unite in making apparent their prejudices for or against political men or measures” (Gospel Workers, p. 391).

“Let political ques­tions alone,” White counseled. “Every teacher, minister, or leader in our ranks who is stirred with a desire to ventilate his opinions on political questions, should be con­verted by a belief in the truth, or give up his work” (Ibid., pp. 392, 393).

In 1952, General Conference President J. Lamar McElhany wrote, “The church has never attempted to instruct its members as to how they should vote, or for whom they should vote. These are matters that must be left to the members' individual conscience. Nor has the church placed any ban or censure on its mem­bers if they as qualified citizens choose to exercise their right to vote, or on any who may choose not to vote.”

McElhany continued, “We believe every member…is entitled to exer­cise his or her right of franchise. The stability and foundation of good government rests upon the peo­ple. If those who are stable and law abiding and have a high regard for the principles of good gov­ernment hold themselves aloof from the task of choosing good and fit men for governmental leader­ship, they thereby make themselves responsible for failures in government. This is a responsibility good citizens should seek to avoid insofar as their votes make this possible. … It is important that all issues that are to be placed on the ballot should be care­fully studied by every conscientious voter.”

The result of these factors is that partisan domestic political disputes take a backseat to the larger sense of the mission of the Adventist church.

The Adventist church remains relatively small in the United States, so when Adventist politician Dr. Ben Carson, currently the U.S. Secretary of Housing and Urban Development, was briefly the front-runner in the 2016 Republican primaries, it made for interesting discussion among the ranks of Adventists. For Adventists, having a single member with national influence is a big deal. Yet the denomination maintained a non-partisan stance, issuing a press release acknowledging that while Dr. Carson was a well-respected physician, “it is important for the church to maintain its long-standing historical support for the separation of church and state by not endorsing or opposing any candidate.”

Because of its careful avoidance of partisan politics, and focus on specific issues not personalities, the church has cultivated an atmosphere of non-partisanship that has allowed it to be a leader on church-state issues. Both Democrat and Republican leaders have endorsed its legislative initiatives on workplace religious freedom and the church’s international humanitarian work has been recognized and respected by governments around the world.

We are living in an age when partisanship is constantly barraging us at a fevered pitch. The fear-inducing rhetoric of politicians, the press, and social media is combining to inspire unstable people to take violent action. If you can’t catch a break from what’s happening in the world, there is still a “safe space” to find some shelter from politics and take a break.

“Come to me, all you who are weary and burdened, and I will give you rest. Take my yoke upon you and learn from me, for I am gentle and humble in heart, and you will find rest for your souls” (Matthew 11:28-29, NIV).