What We Saw In San Antonio 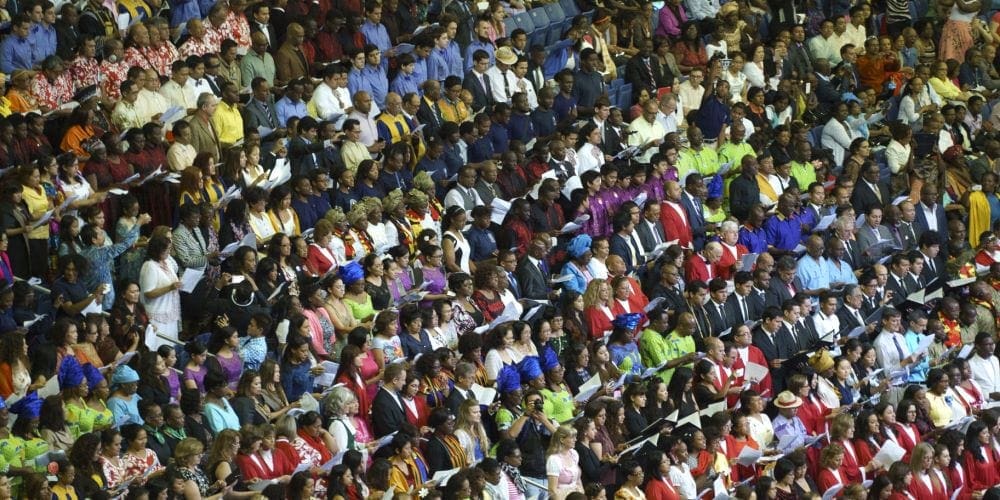 We stood quietly together on the stage of the 2015 General Conference Session in the Alamodome.

On the surface it looked like everyone was busily involved in a discussion. But behind the scenes, Twitter was pulsating out of the stadium in San Antonio, Texas. After all, the officers of the Nominating Committee had just walked on the stage and must have something important to report.

But we weren’t using our phones and didn’t know what Twitter was saying. All we could see were the people lined up at the microphones to discuss, well, not one of the heavier items that was dealt with during the session, but when and how and whether to use the electronic voting devices or general secret ballots.

As we watched, we could see what delegates themselves might not have seen. We remembered one of social psychologist Geert Hofstede’s grids for interpreting cultures — individualistic versus collectivistic communities.

Those sitting in world division sections that came from individualistic cultures expressed deep concern that votes on significant issues might be taken where it could be noticed how someone voted. They were afraid that people would look to see how a leader voted and vote with him or her instead of according to their own consciences. Of course, such a method would make the results unfair in their minds.

But we also noticed that those sitting in the blocks reserved for groups from collectivist-oriented cultures not only didn’t want secret ballots but they also expressed deep concern about using them. They were sure that secret ballots and electronic voting devices are only used by people (and politicians) who plan to manipulate results or outcomes. Many of them expressed a desire for what they considered transparency regarding how everyone voted and to not have them able to claim one thing and have voted something different. They were sure that the only fair way to have an open election is to do it by raising the neon-green voting cards.

And after all this back-and-forth discussion on voting methods, we marvel at how people sometimes argue that culture does not affect the church. The role that culture played and continues to play in mission and community makes it a fertile field for continued study in our multi-national, multi-racial, multi-regional, and multi-cultural Seventh-day Adventist fellowship — but only with an eye to building a stronger, more mission-focused community.

So in using the voting method conversation at the General Conference Session as a case for discussion, we would like to ask, “Is one way right and the other wrong?” Is privacy a greater value than transparency? Or does transparency hold greater value than privacy? How does the Bible portray group decision-making?

This is why a global church is so dependent on the Holy Spirit — because every society has clarity toward some things and blinders toward others.

This is why Ellen White encourages the benefits of multi-national fellowship and affiliation. She says, “There is no person, no nation, that is perfect in every habit and thought. One must learn of another. Therefore God wants the different nationalities to mingle together, to be one in judgment, one in purpose. Then the union that there is in Christ will be exemplified” (Counsels to the Church, p. 288).

So how do we bring together such disparate ways of looking at corporate decision-making in one world church body and not have chaos?

Maybe talking a little more about diversity and differences that are deeply rooted in culture but not biblically right or wrong on either side would help.

Of course to do so would mean that we must affirm, in cultural humility, the legitimacy of cultural influences on our perspectives. And then, as Ellen White exhorted, proceed to learn from one another. The most recent General Conference Session obviously provided numerous opportunities for our world church to engage in cross-cultural learning.

In the Image of God

No one individual can fully reflect the image of God. No couple or family or single ethnic group.

Jesus apparently saw the same potential in his disciples. Thus, in John 17:20-23 (NLT), He prayed, “I am praying not only for these disciples but also for all who will ever believe in me through their message. I pray that they will all be one, just as you and I are one — as you are in me, Father, and I am in you. And may they be in us so that the world will believe you sent me. I have given them the glory you gave me, so they may be one as we are one. I am in them and you are in me. May they experience such perfect unity that the world will know that you sent me and that you love them as much as you love me.”

Our deepest unity grows out of our love for Jesus Christ and for the mission He has entrusted to our world church. We may disagree on methods, but we can ill-afford to disagree on our mission — to take the gospel to the whole world, for a witness to all nations, and then see the end come (Matthew 24:14).

The 60th Session wrestled with some really important issues. It is true we spent most of our time in a closed room with the Nominating Committee and missed out on many of those discussions. Both of us actually came planning to do nothing other than serve as engaged delegates.

But God had a different plan. He tasked us, along with Dr. Richard Hart, president of Loma Linda University; and Dr. Cheryl Doss, director of the Institute of World Missions, to serve the 2,600 delegates as "worker bees” along with the 230 members of the Nominating Committee.

For us, the picture that most stands out in our mind is of thousands of individuals coming together to conduct business — individuals whose color and dress and food and culture and language and way of making decisions often seemed different and possibly even wrong to each other.